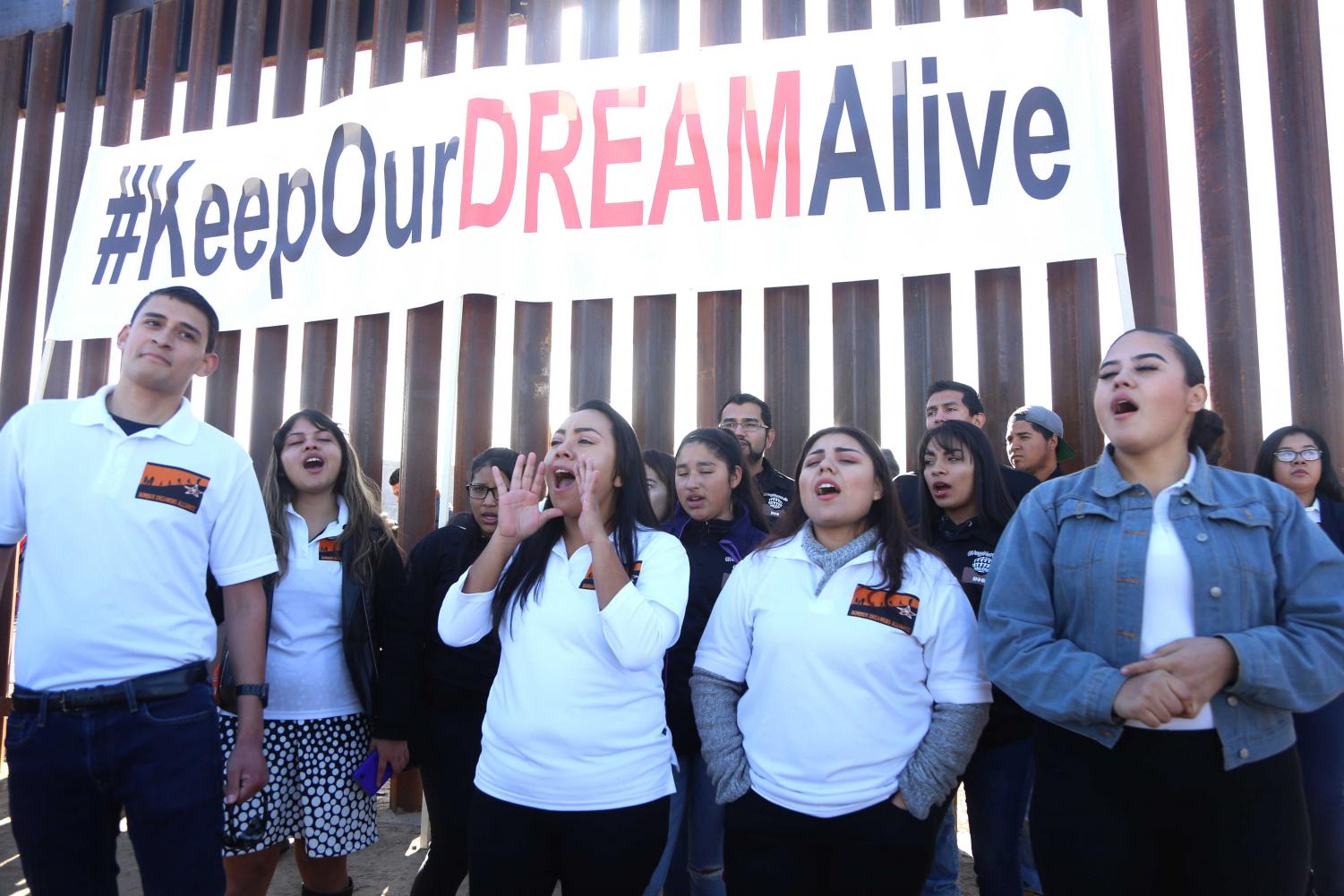 The Border Dreamers Alliance chant along the dreamers on the other side of the fence that were deported on Sunday, Dec. 10, 2017 (Gaby Velasquez)

The Border Dreamers Alliance chant along the dreamers on the other side of the fence that were deported on Sunday, Dec. 10, 2017

Families gather to “Keep Our Dream Alive” at the U.S./Mexico border 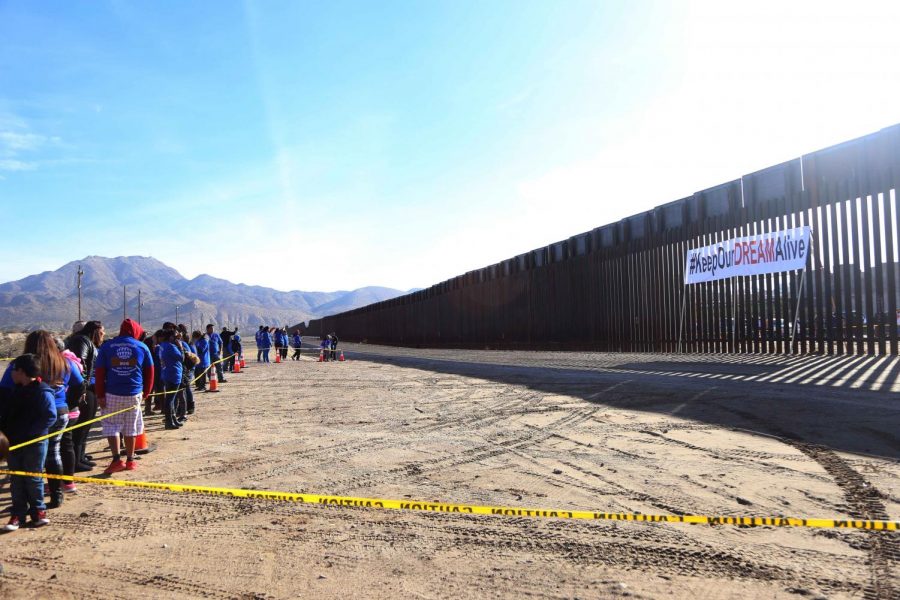 Gallery|28 Photos
Gaby Velasquez
Dozens of families were reunited at the Sunland Park, NM / Ciudad Juárez border on Sunday, Dec. 10, 2017 for “Keep Our Dream Alive.” The event was held by the Border Network for Human Rights.

Kathya Cota received the best early birthday present. She got to see her grandma for the first time in six years.

Cota was one of the dozens of families who gathered along the U.S./Mexico border to reunite with their loved ones for a few moments on Sunday morning. These families were either undocumented or could not cross the border to see relatives.

“You know I love her to death and I really hope that one day I’m going to be able to see her. But not through the wall and actually be able to hug her and show her how much I love her,” Cota said.

Cota is undocumented and was brought to the U.S. at the age of 10 by her mother to go to school and “chase the American dream.” Now 16—”tomorrow I’m going to be 17”—Cota said that while she is thankful to be in the United States, “good things come with hard decisions, and I guess this was one of them.”

The reunion was supposed to be in the Rio Grande riverbed, but due to heavy rainfall it had to be moved to the Sunland Park, New Mexico border fence. The move meant that families could not hold each other in their arms, instead, they reached through the metal columns that were originally made to stop individuals from crossing.

For Jesus Montejo, 14, it was the first time he met his father in person.

“It was exciting, and I was happy about it. Because I haven’t seen him for 14 years, and it’s that feeling like you don’t know him but you know him somehow,” Montejo said.

Montejo said that he told his little brothers and sisters to study hard.

A group of Dreamer activists called the Border Dreamers Alliance, also attended and spoke out against the Trump administration rescinding the Obama-era Deferred Action for Childhood Arrivals act. The act allowed individuals who entered the U.S. as minors receive deferred action from deportation for a 2-year renewable period.

Dreamers who were deported stood at the other side of the wall in Mexico as well.

Wendy Castro, 19, is a DACA recipient and a part of the Border Dreamers Alliance as well as BNRH. She was one of the 4,000 recipients whose applications arrived late due to the Post Office failing to deliver them on time. Castro was allowed to resubmit her paperwork and remains a DACA recipient.

“It just sucks that people think that it’s easy to be an immigrant. But I also say this country is what made us immigrants, you cannot tell me that this country was yours because the only people who can tell me that is a Native American,” Castro said.

“So you are in a constant state of uncertainty.”

The future of the DACA program remains uncertain as Trump gave Congress until March to figure out a solution.

Other Dreamers like Senaida Navar, an assistant instructor in rhetoric and writing at UTEP, is looking at Canadian schools to get her Ph.D. if Congress fails to renew the program.

“As some of the Dreamers on the other side will tell you, it’s very difficult to get into schools once you’re in Mexico because of the high requirements they have, for my degree they actually require that you are able to speak two languages,” Navar said.

“I talk to a lot of DACA students and they’re like, ‘We never got to be teenagers because we’re always thinking what’s going to happen tomorrow.’ We’re always thinking of saving money, we don’t take vacations, we’re always kinda like thinking ‘Ok tomorrow I might not have my permit, so I need to prepare for that,’” Navar said. “So you are in a constant state of uncertainty.”

Navar said that the only thing she that shocked her about the administration’s decision to rescind the program is that it took them so long to do so.

“This event is important because it gives hope to families on both sides that eventually we will be able to overcome these inhumane policies, and that we will respect the rights and the dignity of every single human being regardless of immigration status to live a full life as human beings,” State Senator Jose Rodriguez, D-Texas, said at the event.

Sergio Gonzalez’s wife, who was too overwhelmed with emotion to speak, said that she has not seen her sister in 7 years.

“She was very nervous, she was very emotional because it’s been 7 years now, and when she got to the fence, it was very hard for her,” Gonzalez said. “It’s very emotional seeing all these families, and seeing this go on is very important. It’s a blessing.”

It was due to the BNHR’s relationship with the Border Patrol that this event was allowed at all. BNHR has been engaged with them for 15 years and acts as a bridge between the immigrant community and law enforcement.

Most of the families were from El Paso or Southern New Mexico, which represents a small portion of the 11 million undocumented immigrants still living in the U.S., according to the Pew Research Center.

“This is not only happening here at the border region. This is where the families have more opportunity to get closer to the border wall or the river, but we had families calling from Houston, Austin, New York, Chicago, that want to be a part of this event, and we will include them in the near future,” Gonzalez said. 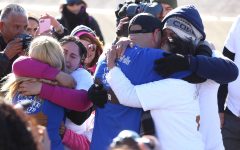