What is UpStge? Part 1: The Preview 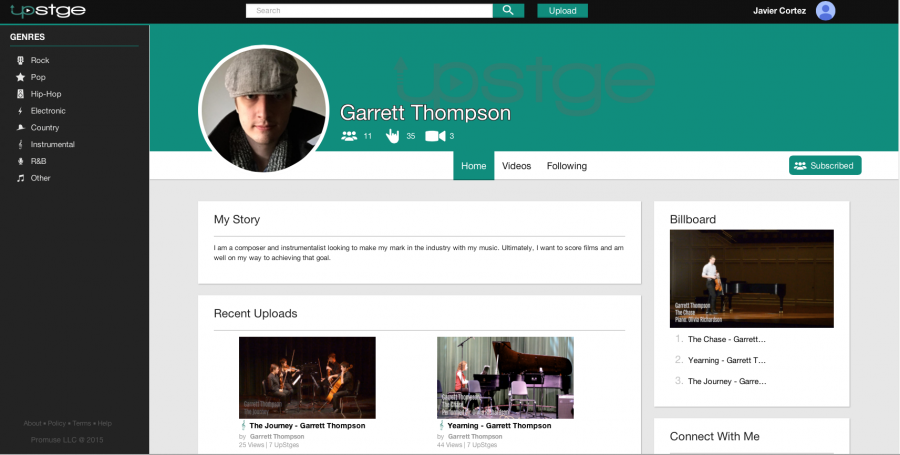 Imagine a music website that is more than a platform for simply uploading and sharing music, imagine a music ecosystem where artists and listeners alike share in a mutualistic relationship— the artists showcase their talents and the listeners discover.

That is the template that El Pasoan Andres Hernandez is using with his new website UpStge.com. Pronounced upstage; the site is bridging the gap between the artist and listener.

“Artists and music fans can become members of UpStge,” Hernandez said. “Getting discovered (as a musician) is one side of the equation. Discovering (as a fan) is the other part of the experience that we hope to make unique and enjoyable on UpStge.”

The site was launched on Aug. 29, 2015, but the concept for UpStge has been in the works for a long time says the DeVry University graduate.

“UpStge was something I started envisioning during junior year of high school (2009),” Hernandez said. “When I first started drawing mockups of the site, it was called Taking the Stage. In which videos of different genres compete for exposure–the stage.”

As speedy as the idea of UpStge sounds, it was a gradual process for Hernandez. The inception of UpStge coincided with his growing love for music.

“The more my passion grew for music, the more I wanted to be a part of it somehow,” Hernandez said. “It wasn’t until three years ago that I started playing music; but the site was another means for me to try and get involved in the music community and try to make an impact.”

Hernandez had the passion and vision to conceptualize the site, but he was not alone in making what once was a senior project into what the site is today and for the future.

When asked to describe UpStge, Hernandez, called it a more honed in version of YouTube, specifically for upcoming musicians and music lovers.

Similar to how YouTube features recommended videos and/or channels on their home page, UpStge features a Darwinist approach. Artists and their videos, in their respective genres, compete to be featured on the stage.

Artists get to the main stage by the amount of UpStges (likes) their video gets. The top videos featured on the stage benefit from additional exposure for a week until another video takes its place on the stage.

Artists and music fans can become members of UpStge. Getting discovered (as a musician) is one side of the equation. Discovering (as a fan) is the other part of the experience that we hope to make unique and enjoyable on UpStge”

One artist who has been featured on the main stage on more than a few occasions is Garrett Thompson. He said that the site distinguishes itself from all the others in one big category–exposure.

“The problem with other sites such as YouTube and Sound Cloud is that the exposure is limited to an already established fan base,” Thompson said. “By getting on the main stage [of UpStge], you have a chance to reach people that don’t know your music, and thus have a chance to get more valuable exposure.”

Thompson is a composer who performs instrumental pieces. The three videos that he has posted on UpStge have seen a significant amount of traffic, resulting in 33 UpStges (likes). The site traffic is not at a premium yet, but Thompson likes the feedback he has gotten thus far.

“People have been primarily positive in their responses,” Thompson said. “It is really cool to see some of the comments on the songs. Since everything I have uploaded has been instrumental, the meaning and emotions are more prone to individual interpretations. It is interesting to see what the pieces remind them of and compare that to what I had in mind when writing them.”

The feedback that Thompson has received from his videos is the driving force of the site. What seems to distinguish UpStge from competitors like YouTube and SoundCloud is its ecosystem or the interaction between artist and listener, which is vital to the success of UpStge.

Most websites feature a comment section or a like/favorite button, but the creators of UpStge are trying to create a more genuine interaction between artist and listener. Lead designer Eric Rivera says the ecosystem is not fully developed yet, but a stronger base for interaction is on its way.

“UpStge focuses primarily on the music industry and targets artists, musicians and music enthusiasts alike,” Rivera said. “We have and will continue to design an ecosystem, where all can meet and engage with one another sharing content, talent and commentary–a musical network.”

Competing in an industry that is filled with giants like YouTube and Spotify is a tall task, but the creators of the grass roots UpStge say they are ready for stiff competition, meanwhile providing an authentic and, most importantly, different experience for artists and listeners alike.

“We always have plans for new features and changes to come to the site,” Hernandez said. “Our biggest priority is getting our name out and building a reputation. If the site looks to be successful, we will never stop improving the experience–that is the nature of any business.”