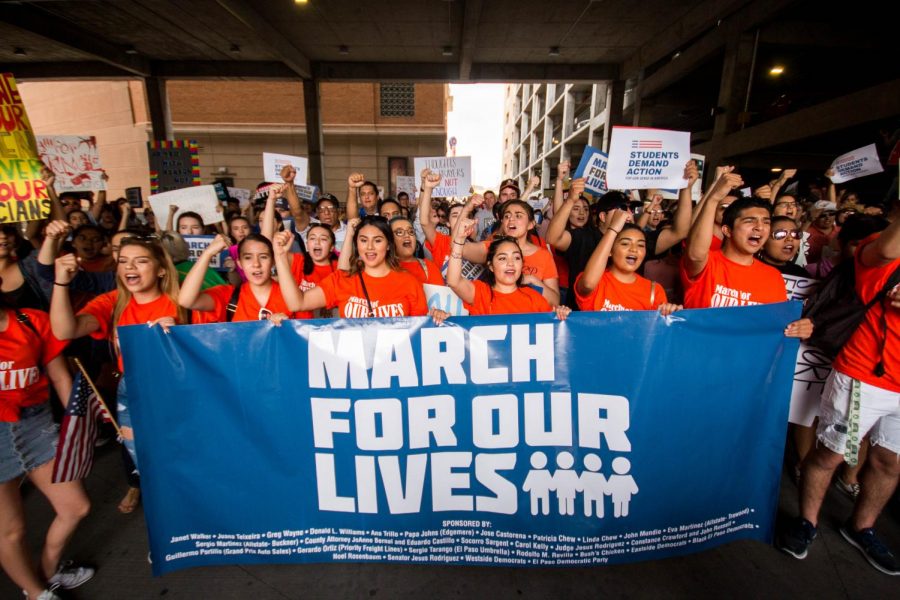 El Paso high school students march toward San Jacinto Plaza in downtown El Paso as they participate in the national March For Our Lives on Saturday, March 24.

March For Our Lives rally takes over downtown El Paso

Hundreds of demonstrators including students, educators and parents took the streets of downtown El Paso in unison with the national March For Our Lives movement. The El Paso march was just one of at least 846 other planned protests across the globe on Saturday, March 24 according to March For Our Lives.

Chants such as “Enough is enough!,” “Books, not bullets!,” and “Hey, hey NRA! How many kids have you killed today?” echoed as the group marched from Cleveland Square Park, around Southwest University Park down Durango street and into San Jacinto Plaza.

The march was originally planned in Parkland, Florida by Stoneman Douglas High School students who were moved to action after 17 of their classmates were fatally shot and 16 wounded on Valentine’s Day, Feb.14.

In El Paso, elementary school students from various schools held photos of the 20 children killed at Sandy Hook Elementary School, to kick off the rally at Cleveland Square Park.

Texas State Senator Jose Rodriguez spoke at the rally in support of the students and Women’s March El Paso chapter who helped organize the march along with Sun City Activists and other groups.

“How is it that we’ve come to the point in this country where youth are marching for their lives?” Rodriguez said. “That’s why we’re here today, we should not forget that. Students all over the country today have taken to the streets to say that enough is enough and to hold, frankly, us adults accountable who haven’t been able to do anything to diminish and eradicated the violence that is taking place on our school campuses, not just in our high schools but it our colleges across the country.”

“Our voice and our passion are more powerful than the NRA,” said Ysabella Garcia, a middle school student who sang the national anthem before the march. “I am sick of politicians three times my age making decisions for me and my generation. We want to challenge the policies that are in place. I have has enough of hearing the news every single day and mourning the loss of students killed in shootings. It is the time for change. Do not underestimate the strength of our voices. We will remember, are you with us or against us.”

Garcia’s plea for gun control was followed by cheers from the crowd.

“I see so much leadership in front of me right now, especially the young people who have helped to pull this together today,” said U.S. Congressman and Texas Senate candidate Beto O’Rourke as he took the stage. “Let’s hear it for the young people, who are our future, they’re going to force us to do the right thing for our country.” 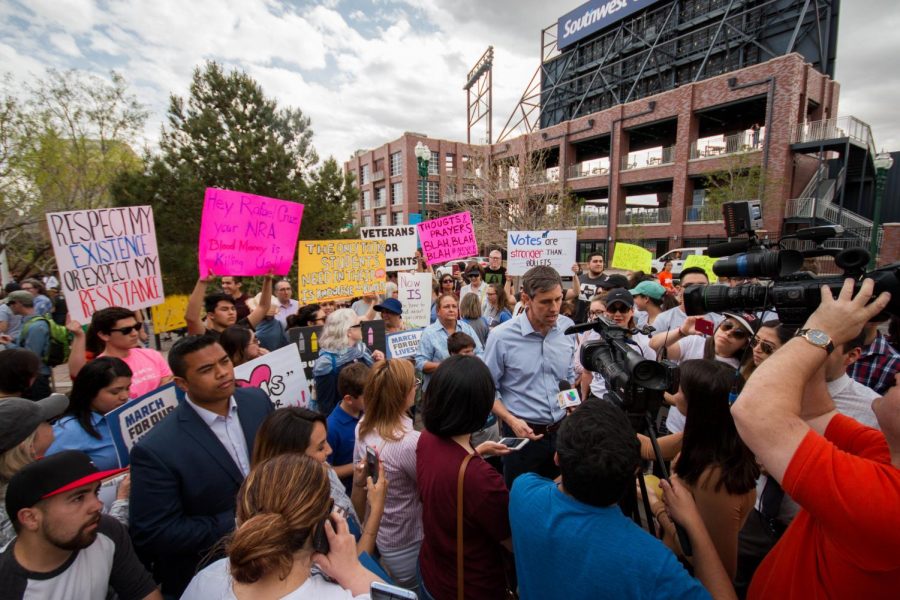 High winds and gusts of rain did not stop the group from chanting to San Jacinto Plaza where high school students and co-founders of Sun City Activists spoke to the crowd.

SGA President, Kristen Ahumada, also spoke at the march on representing the 25,000 lives at UTEP. She described the march as a culminating moment where students were able to empower one another.

“They were so passionate, evoking so much emotion whether it was chanting or crying and conveying that through different elements such as musical performances,” Ahumada said following the march. “We’re here together, we’re going to form this united front and together we can achieve more, and enact more policy.”

UTEP Chicano Studies Professor Irma Montelongo handed out T-shirts at the march to commemorate the day.

“We just felt it was incredibly important to support these kids, with the logistics on how to get permits, the police, and all the things they needed to pull this off, “Montelongo said. “This is their march.”

As an educator, Montelongo has always seen her classroom as safe spaces.

“I’ve always seen my classrooms as spaces of collaboration and interaction, respect, dignity, so for all those reasons, there’s no space in my class for guns or for violence. I’m 199 percent against it,” said Monelongo.

The demonstration also drew counterprotesters from Open Carry Texas, with some carrying guns on their back. Some marchers engaged with the group.

Joe Clayshulten drove from Las Cruces to protest the march.

“The desire to end violence is admirable, but their anger is misplaced,” Clayshulten said. “It’s not the guns. Guns haven’t changed society. The solutions are to bring back morals to society and personal responsibility. Gun control is the first step back to tyrannical government.”

It is estimated over 800,000 marchers were present in Washington D.C. on Saturday according to March For Our Lives.