In solidarity with the 500,000 participants of the Women’s March to Capitol Hill in Washington, D.C., over 1,000 El Pasoans and Juarenses came together for the Women’s March on the Border. Supporters of equal rights for women marched from Armijo Park in the Segundo Barrio to San Jacinto Plaza on Saturday, Jan. 21.

Young girls held the hands of their mothers as they chanted and held signs that read “Girl Power” and “Still I Rise.”

Boundless Without Borders, a newly formed coalition that was created to organize events in El Paso around the inauguration, hosted the march.

“We decided to start working on this about four weeks ago. We wanted to create a space that was going to feel inclusive and that was not going to be focused around divisive rhetoric,” said Sandra Rodriguez, community organizer for BWB.

Rodriguez said that they thought only a few hundred would show.

UTEP nursing alumna Bianca Ortiz came out to the event with a group of friends and was not surprised that so many participated.

“The election season left a lot of us pretty disheartened about our government, especially after the inauguration. Some of us are still fearful that the rights that have been protected, especially women’s reproductive right’s, will possibly come to a halt,” Ortiz said. 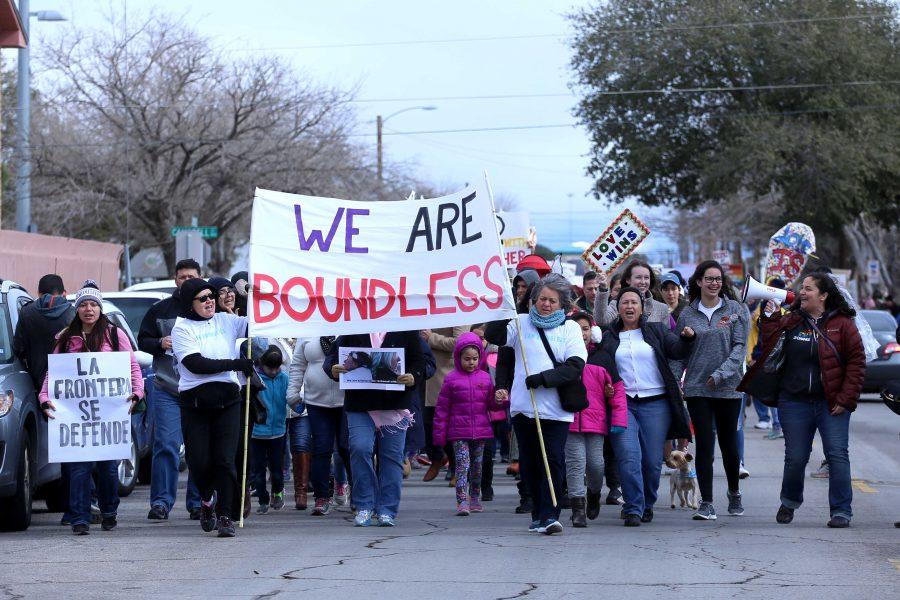 Many in attendance wore “pussy hats,” pink knitted beanies with small ears that were worn throughout the country in a visual show of solidarity with the Women’s March movement.

Gabrielle Mendoza, a junior sociology and women’s studies double major, did not want to just sit down and accept the election results.

“I’m a very strong advocate for women’s bodily rights and it’s just really important to me that nobody can tell me what my body can or can’t do, or what I can do with my body,” Mendoza said.

El Paso was one of 600 cities around the world to stand with women’s equality Saturday. The crowd in the streets of downtown expressed solidarity not just with women, but with the LGBT community, immigrants and minorities.

Boundless Without Borders will continue to plan events for the next four years.