While riots in Portland, Oregon and Oakland, California have sprung up since the election results, in El Paso, Texas over a thousand people in San Jacinto Plaza chose to peacefully protest the rhetoric and policies of President-elect Donald Trump.

Alphonso “Chandelier” Treviso, a sophomore English American literature major, was one of the organizers that started the local “Not My President” peaceful protest.

“I created this event because I felt it was important to make our voices heard on the borderland,” Treviso said. “I feel like Donald Trump has taken this hateful rhetoric towards all kinds of people including our neighbors of the south, and I needed people to feel like that’s not our voice.”

Around a dozen people of all ages, veterans, students, El Pasoans, Juárenses and someone from as far as Portland took the stage and expressed their concerns over the newly elected president.

Alex Rodriguez, a senior majoring in political science, accepts that Trump is now president-elect but thinks that Trump doesn’t have a basic understanding of what it means to be president. During the rally, Rodriguez spoke about fear and uncertainty that surrounds the idea of President Trump, and the importance of voting in the mid-term elections to fight that fear.

“If you say you’re fearful, it means you respect someone, and I don’t respect Donald Trump so I won’t fear him,” Rodriguez said to over a thousand people. “El Paso make your voice heard, we are the city on the border, we are that lovely river, we are the diverse river, we are the safest city in America and yet they tell us we need to militarize this border.” 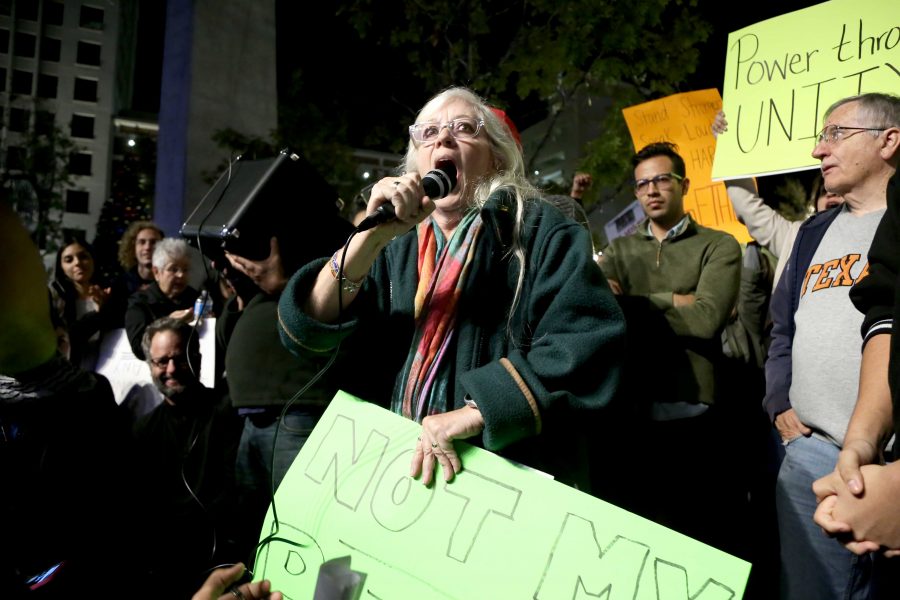 Gallery|34 Photos
Michaela Román
A veteran speaks at San Jacinto Plaza at the "Not My President" peaceful protest on Friday, Nov. 11

After an hour of speeches, the gathering marched up Mesa, shouting chants such as “not my president” and “this is what democracy looks like,” past Interstate-10 and back down to San Jacinto Plaza, temporarily blocking traffic.

Mario Muniz, a junior majoring in creative writing, felt hopeless after the election, but rekindled after the huge response Treviso received for putting the event together.

“It was unexpected, I thought a couple hundred people were going to share the event,” Muniz said. “It was intense, I was excited for it. I was a little scared you know; I didn’t know what to expect from it—sometimes things get out of hand—but everything seems to be going smoothly.”

While the aim of the gathering was to have a peaceful demonstration, not everyone who showed up held the same beliefs. A small argument broke out between two men and a woman over the now infamous phrase that Trump said while talking with Billy Bush of Access Hollywood back in 2005. There was also a Trump piñata that was brought out but was quickly taken down after Treviso explained that the protest was a peaceful demonstration.

Christian Vasquez may be reached at [email protected]