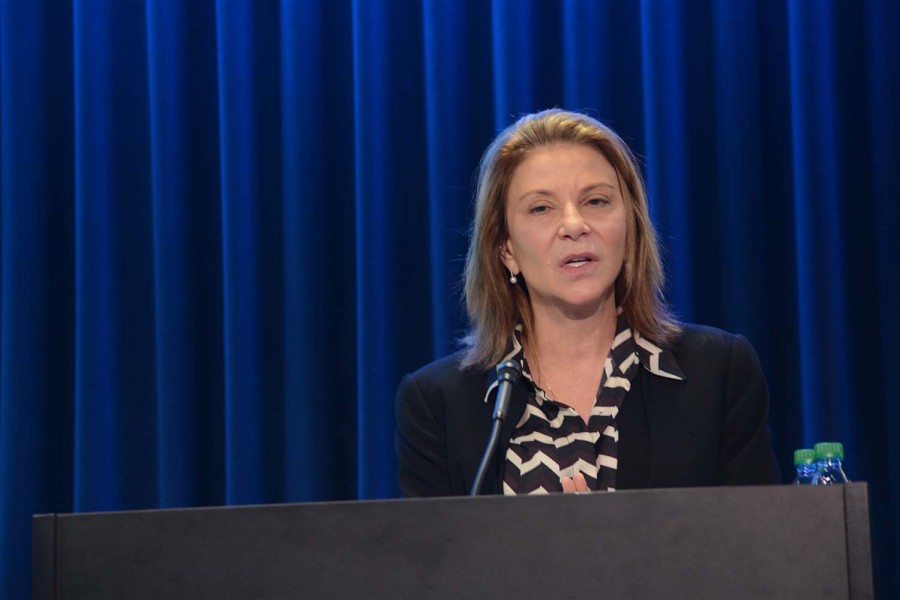 Susan Molinari, vice president for public policy at Google, says women make up only 18 percent of computer science workers even though women make up half of the population.

WASHINGTON – Google officials said that by 2020 there will be 1.4 million new computer science-related jobs in the U.S., but right now, there are only enough computer science graduates to fill 32 percent of those jobs.

The Center for American Progress and Google co-hosted an event Tuesday about encouraging women and minorities to study computer science and to make it a part of core curriculum beginning in elementary school.

President Barack Obama announced Saturday an initiative to make sure all students get the chance to learn computer science, especially girls and minorities. His final budget, due out Tuesday, will include $100 million for school districts and $4 billion for states to expand K-12 computer science classes.

“It’s called Computer Science For All. And it means just what it says – giving every student in America an early start at learning the skills they’ll need to get ahead in the new economy,” he said in a statement.

“Right now we’re in the middle of a technical revolution, really, and we’re creating things that will be the foundation of technology 100 years from now, and we want women to be a part of that,” she said.

Malone, of Dayton, Ohio, said that, since she started classes as a computer science major, she has not been in a class with an equal gender divide. Although all of her classes are predominately men, she thinks there are just as many majors with mostly women.

Susan Molinari, vice president of public policy for Google, said the company will give $23.5 million in 2016 to support K-12 computer science education. She said that, although women are half of the population, they hold only 18 percent of computer-science jobs.

“It’s a solvable problem, but only if we start to inspire young women to consider careers in computer science,” she said.

Intel released data last week saying 43 percent of new hires were women, exceeding its goal for 2015. But women still make up just a quarter of its workforce. Amber Mirza, a University of Maryland junior studying computer science, said she was not a computer science major when she started college. She said her high school in Bernards, N.J., did not offer any computer science courses. She wasn’t exposed to what computer science was until she got to college.

Mirza said there needs to be computer science education at a younger age for girls, especially. That way, they won’t feel so much pressure when they choose a career.

Swetha Prabakaran, a junior at Thomas Jefferson High School for Science and Technology in Fairfax, Va., and founder of Everybody Code Now!, said her parents both work in the field and they encouraged her to take a computer science class in her freshman year of high school. She then joined the National Center for Women and Information Technology and it helped her meet other girls studying computer science. “That kind of encouragement makes a difference when you are one of five girls in a class of 27 for freshman computer science that is mandatory for graduation,” she said at the Google event.

Everybody Code Now! partners with elementary and middle schools to teach coding to children by playing games and showing that coding is just like other activities.

“So far, it seems to be working. We’ve expanded to partners in over a dozen states, and we’re growing every single day,” she said.

Susan Molinari, vice president for public policy at Google, says women make up only 18 percent of computer science workers even though women make up half of the population. SHFWire photo by Tia Rinehart

Susan Molinari, vice president for public policy at Google, says women make up only 18 percent of computer science workers even though women make up half of the population. SHFWire photo by Tia Rinehart

She said she started the program because she knows how it can help break the barrier of women not feeling like they belong in technology-related jobs.

Ruthe Farmer, director of the K-12 alliance for the National Center for Women and Information Technology, said the group’s program Aspirations in Computing unites girls in technology. She said it helps make girls feel more comfortable and more a part of a group that is mostly dominated by boys.

“There’s all this social tension between a technical identity and a girl identity, and what aspirations in computing does is it puts these girls together who are all both technical and female,” she said.

The center has a program designed for Latinas called Technolochicas. It’s designed to encourage Latina women, who make up 1 percent of the technology workforce, to get involved in the technology industry.

Farmer said the program will induct 2,500 women this year making a total of 8,000 women. She said 14 percent of the group is Latina and 15 percent is African American.

Reach reporter Tia Rinehart at [email protected] or 202-408-1490. SHFWire stories are free to any news organization that gives the reporter a byline and credits the SHFWire. Like the Scripps Howard Foundation Wire interns on Facebook and follow us on Twitter and Instagram