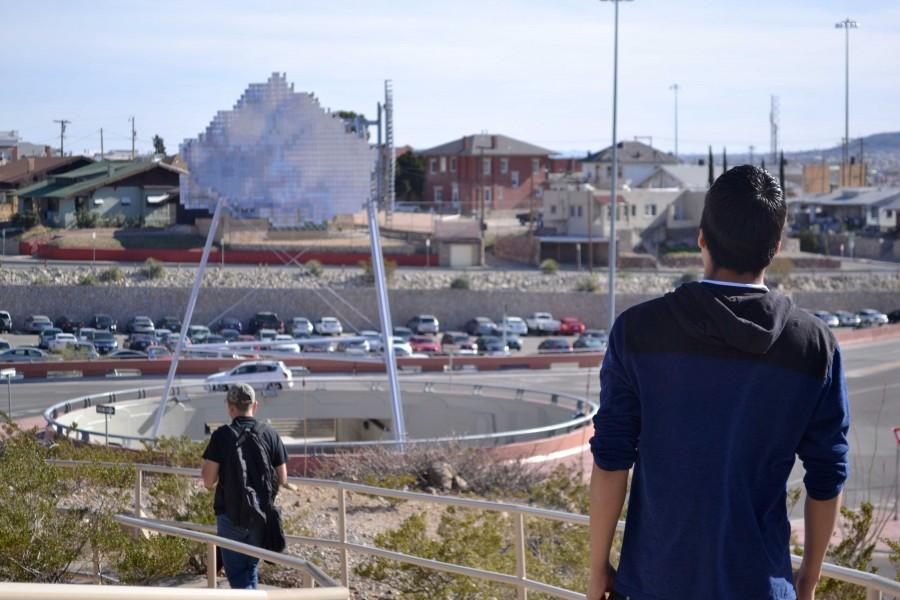 Not everyone a fan of “The Cloud”

UTEP students were caught off guard as their first week of school was not only met with a stack of syllabi and new class routines, but a new piece of public art commissioned by the city standing tall in the center of Schuster’s roundabout. Unfortunately for people without depth perception “The Cloud,” by Donald Lipski, is a three-dimensional structure of a healthy, fluffy cloud made up of individual white and gray panels.

“The Cloud” is a part of the city’s public art program which was put in place by the 2006 City Council in attempts to beautify communities in El Paso with pieces of art reflecting the city’s history and uniqueness. As of now, the program has established over 50 pieces art, including this past year’s light sculptures on I-10 near Airway, the cloud off of Schuster, and the baseball stadium’s stained glass tower seen from Franklin Avenue. The city’s decision to commit 2 percent of every Capital Improvement Project budget is exactly what El Paso needs to be taken seriously as a progressing city.

Tracey Jerome is the director of the city’s Museum and Cultural Affairs department and one of the city’s officials who helped see the cloud to completion. She is on most of the panels that decide which artists are best suited to design pieces for different parts of the city.

“One of the goals of the public arts program is to create a visual identity for visitors and residents,” Jerome said. “UTEP is known for its Bhutanese architecture, ‘The Kingdom of the Clouds.’ This interpretation of a cloud ties into the design of the UTEP campus and helps create a focal point as people drive through the area.”

As suitable as it may be for UTEP’s campus, not everyone is entirely happy with the installation.  Robert Groh, a junior business administration major, likes the idea but feels the execution was a miss.

“The beams supporting it are pretty distracting,” Groh said. “It looks more like a highway billboard than anything.”

While the cloud does little more than advertise the different shades of white, the supporting beams do extend past the cloud’s boundaries, and in a way dwarf the actual piece of art by the systems supporting it. Erica Ramirez, a junior studying English and American Literature, disagrees.

“I think it was a good use of money,” Ramirez said. “It’s visually appealing, especially right there where it’s just concrete and traffic.”

The city’s public art is a lot like the Kardashian family: it’s already put in place in society so you might as well have a strong opinion about it. Art cannot be separated from infrastructure as if it were a kid brother with a handful of crayons. There are artists in El Paso honing their craft to professionally, and it is decisions like this that allow our local talents to share their art with the same environment and community that inspires them. We must step out of the mindset that art comes from stereotypes like the hunched painter, goateed sculptor or wiry musician. These are our friends, aunts, brothers and coworkers, and people who drive on I-10, visiting family in Juárez and drowning the same tacos in salsa who are hunting for an opportunity to share their art. If we want El Paso to have landmark restaurants, then we have to find ways to allow master chefs to step out of their kitchen. If we want to see local bands headline festival giants like Coachella and Lollapalooza, then we must find spaces for them to try out their newest music. The public arts program is definitely a step in the right direction, allowing visual artists a canvas in the city to create upon, but it comes from an understanding that although it is important to have savvy businessmen and women build the city, it is just as important to have artists bring their point of view to build El Paso in a direction unlike any city in Texas and, dare I say, the nation.

Aside from the installation of the roundabout this past year, the Schuster area of campus has seen few changes. Whether or not the cloud is aesthetically pleasing or efficiently executed is a secondary reason to its existence.

“Public art changes the way we view our community,” Jerome says. “By investing in public art and in our local artists, our city has created a vibrant community where art is an integral part of who we are.”

She is not wrong about this. By merely existing, the cloud has sparked conversation between students and teachers alike, and to debate whether or not it is a good piece of art is to interact, share and connect with members of the community. Even by grimacing and holding your breath for fear of losing the air to express your disgust of the cloud to your classmate is to do exactly what public art is meant to do. For more information on El Paso’s current and completed works of public art, visit mcad.elpasotexas.gov/public-art.

Mike Vazquez may be reached at [email protected]