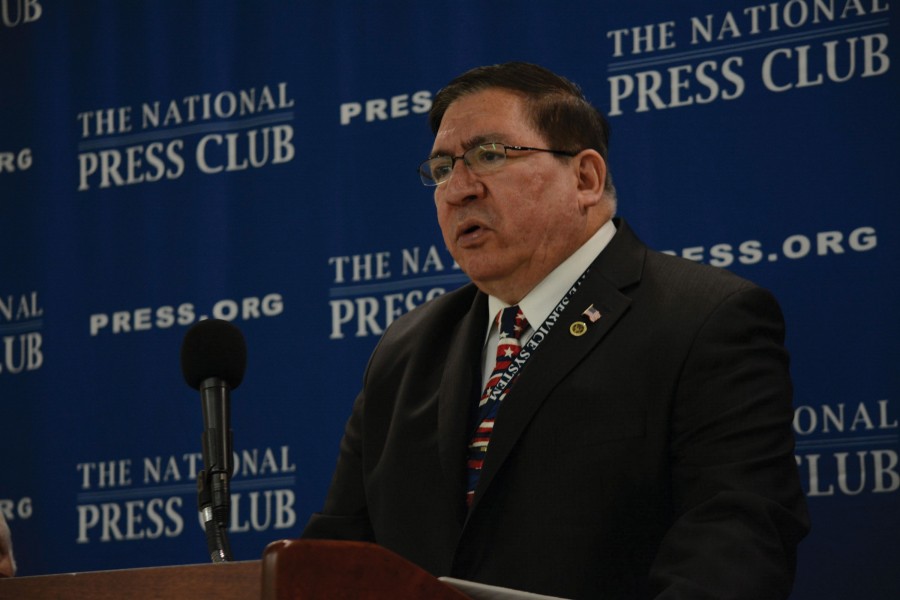 Director of the Selective Service System Lawrence G. Romo said Friday at the National Press Club that he believes there is a 50-50 chance women will be required to register for the draft.

Women could be required to register for military draft

WASHINGTON – Now that women are approved for all military combat roles, the question follows: Will women be required to register with the Selective Service System?

Right now, all U.S. male citizens and immigrants, documented or undocumented, ages 18 to 25, are required by law to register with the SSS. Lawrence Romo, director of the Selective Service System, said Friday at the National Press Club that he thinks there is a 50-50 chance Congress will pass a law requiring women to register as well.

“While the Secretary of Defense recently opened all military combat jobs to qualified women, there has been no change to the Military Selective Service Act, requiring them to register or be subject to a military service draft,” he said.

Romo said the SSS is not a part of the Department of Defense and does not participate in making laws to require women to register.

“The bottom line for the Selective Service System is that we do not create policy, we implement the policy as mandated by our president and Congress,” he said.

“The White House will also be working with Congress to determine if changes are necessary in light of DOD’s decision to open all combat positions to qualified women,” he said.

The first draft in American history was a result of the 1863 Conscription Act during the Civil War. The U.S. has not had a draft since the end of the Vietnam War in 1973. Draftees were selected through a lottery, a drum containing capsules representing every day of the year in it. Whichever capsule was drawn, those men had first priority to serve. Romo said if a draft were in effect today, the SSS would select men using a similar method.

Today, if a woman tries to register with the SSS online, she is denied access to the form

Terry O’Neill, president of the National Organization for Women, said that, although the organization does not believe in a draft, it supports equal treatment for women, meaning they should required to register.

O’Neill said women have been in harm’s way in combat for years, but they were not considered to be in combat roles because it would require an increase in pay.

Verna Jones, executive director of the American Legion, said the Legion’s official position is that women should be treated the same as men.

The Department of Veterans Affairs says there are 2 million women veterans, which is about 10 percent of all veterans.

Jones said the American Legion is actively working to change issues it believes in for the military and veterans, including registering women with the SSS. With 2.2 million Legion  members, she said, anything is possible.

“You know, there’s power in numbers, and so we’re able to talk to Congress, able to talk to DOD, the VA, the White House, and just, you know, let them know what veterans need,” she said.

Jones said she believes women are capable of passing the standards set for combat positions, and there are women fit for these military roles. Last year, two women became the first to graduate from the Army  Ranger School, which qualifies them for special forces teams.

“Never underestimate the power of a woman,” Jones said. “There are women who can go pound for pound, mile for mile with their counterparts.”

In a 2010 women veterans survey, the American Legion found most women veterans did not identify themselves as veterans because, technically, have not been in combat roles.

“If you ask a woman if she’s a veteran, oftentimes she’ll say no. If you ask, ‘Have you served in the military?’ then they say yes,” Jones said.

Romo said registering men and immigrants is so important because just 1 percent of the U.S. population makes up the all-volunteer military. If the country needed more troops quickly, it would go to the list, the only backup available.

“We all enjoy the freedoms that United States citizenship or residency guarantees us, yet we rely upon that 1 percent volunteer force to protect our entire society,” he said.

Reach reporter Tia Rinehart at [email protected] or 202-408-1490. SHFWire stories are free to any news organization that gives the reporter a byline and credits the SHFWire. Like the Scripps Howard Foundation Wire interns on Facebook and follow us on Twitter and Instagram.