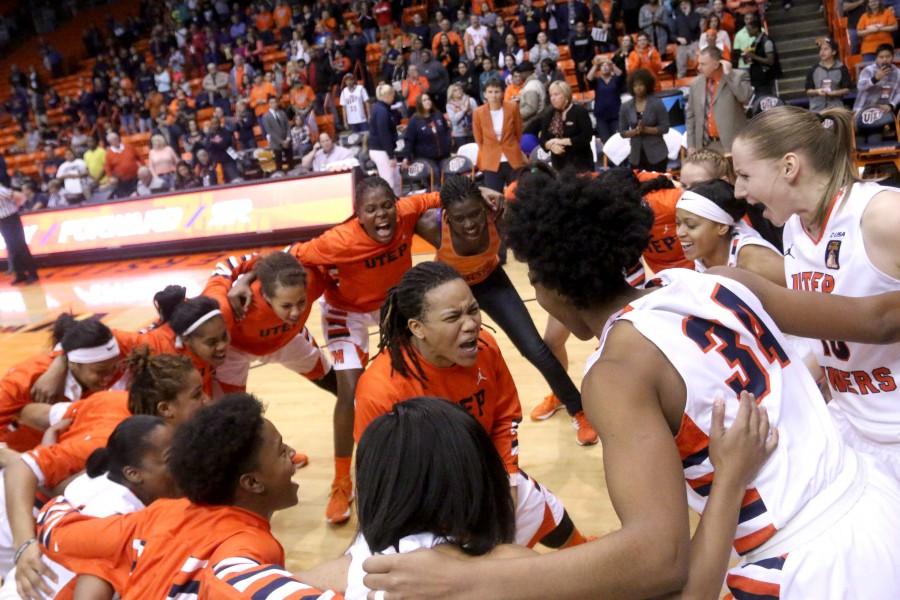 A historic season in the making rolls on for the Lady Miners as they come home to face Southern Miss (Thursday, Jan. 28) and Louisiana Tech (Saturday, Jan. 30) in the Don Haskins Center.

The Miners (16-1, 7-0 Conference-USA) are off to the best start in program history. They are currently on an eight-game winning streak and currently ranked 31st in the nation, according to the NCAA Women’s Basketball RPI. The only other C-USA team with an undefeated conference record is Western Kentucky (7-0).

Before returning to the Don Haskins Center, the squad overcame adversity on their two-game road trip to Florida last weekend.

After trailing Florida Atlantic 30-18 deep into the second quarter, they rallied with a 60-36 run and took the win, 78-66. Jenzel Nash, Cameasha Turner, Starr Breedlove and Sparkle Taylor recorded 17, 16, 15 and 14 points, respectively. The four accounted for 79.5 percent of the team’s points.

Head coach Keitha Adams commended her team for their come-from-behind victory, and called the game “a hard-fought win against a good team.”

The second roadblock for the Miners came after their victory against FAU. Without much rest, they had to travel to Florida International for Saturday’s game; but they had to face the Panthers without two key players: Turner and Chrishauna Parker. Parker had to attend a funeral in Houston, and Turner had concussion-like symptoms from the FAU game, and was kept out of the game.

As these difficulties struck the team, it was time for players to step up and fill the gap. Lulu McKinney started in the empty guard spot, making this her second start of the season.

Alongside Breedlove, McKinney overcame the stress and led a dominating 69-57 campaign over the Panthers. With the help of Breedlove’s three 3-pointers in the first quarter, the Miners stormed out to a 24-7 lead. FIU could not come back in the contest. Breedlove (20 points, five steals) led the Miners in scoring, followed by McKinney (17).

“I’m extremely proud of this team,” Adams said. “It was a great team win.”

About the Golden Eagles

Southern Miss  (10-7, 3-3 C-USA) enters Thursday’s contest trying to put aside a disappointing 72-37 loss to Louisiana Tech. Led by guard Brittanny Dinkins and freshman center Caitlin Jenkins, this squad is balanced beyond the arc and inside the post. Dinkins is able to shoot and dish out the ball, leading the team with 58 assists and posting a positive 12.1 points per game. Jenkins leads the team in points per game (12.8), blocks (32) and rebounds per game (10.4).

Louisiana Tech (9-8, 4-2 C-USA) comes into week 12 of the NCAA schedule on a hot streak, much like the Miners. Despite losing two of their first three conference games, the Bulldogs have won three straight. They currently rank fourth in C-USA standings. Senior guard/forward Brandi Wingate leads the team on both ends on the ball. She leads the team with 16.8 points per game and shoots 57 percent from the floor. On defense, she contributes with 16 steals for the season.

Home is where the heart is

The Miners are currently perfect (6-0) when playing in the Don Haskins Center. This is the second-longest winning streak at home in program history. Under coach Adams, the 2007-08 team was the only team to go 14-0 at home. They have already assured a winning record at home this season.

As part of their two home games at the Don Haskins Center, they will allow free admission to Thursday’s game against Southern Miss for their annual Pack the House night. Tip off will be at 7:05 p.m.