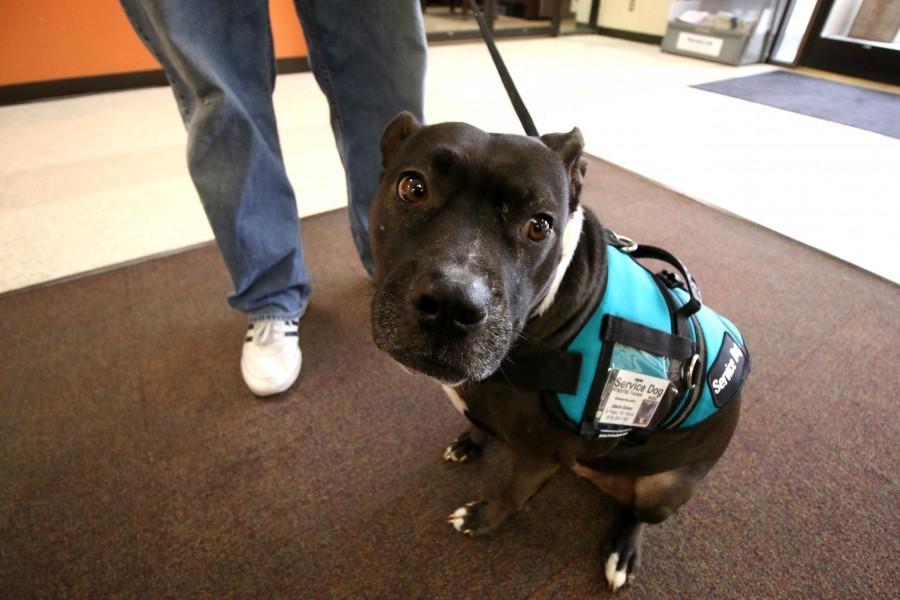 Beginning this semester, you can expect to see a lot more animals strolling around campus. Not for the purposes of entertaining students and faculty alike, but to aid students with disabilities.

The Center for Accommodations and Support Services has made changes to its policy on service animals and assistance animals that are more accommodating to students with disabilities.

Dethlefs is refering to the hefty fines some universities around the country have had to pay to students with disabilities for negligible policy implementation. In March 2013, Grand Valley State University in Allendale, Mich. paid $40,000 to one student after violating federal housing policy by disallowing a student’s service animal on campus.

More recently, Kent State University in Kent, Ohio, paid $145,000 to a couple after violating the Fair Housing Act, in which the Justice Department accused the university of discriminating against the students with disabilities in student housing.

No university wants to pay out large fines or make huge settlements for disregarding policy, but the fear of paying out hefty sums of money was not the reason why UTEP is falling in line with other universities in the UT System, according to Dethlefs.

The change in policy was done out of sheer necessity. The policy on service animals and assistance animals had not been updated in more than four years. The last time the policy was revised was on Nov. 2, 2011.

The revisions to the policy are substantial. The policy of the last four years was a two-page document that only addressed animals on campus and an animal feeding policy. The new document is seven pages long, and delves into a wide range of issues surrounding animals on campus, most notably clearing up the difference between a service animal and an assistance animal.

As defined by the Americans with Disabilities Act, a service animal is a dog of any breed or size, and in some cases a miniature horse, that is trained to work or perform tasks that benefit an individual with a disability, whether physical, sensory or psychiatric. Also, service animals require three to five years of training, which could cost anywhere from $5,000 to $75,000.

An assistance animal differs from a service animal in that they are used only for emotional support, such as companionship or to relieve loneliness, anxiety and depression.

The biggest difference between the old and new policy is more inclusiveness to a wider range of animals and where they can be on campus. A service animal can go anywhere an owner goes, except for places that would be hazardous for the animal such as a chemistry lab.

Junior multimedia journalism major Jason Green is one of the few students on campus that has a service dog and he knows the importance of having a companion by his side to alleviate pain. Green has had his service dog named Nellie, who is a black-coated pit bull, for more than a year now and she has made a big difference.

“The reason that I got Nellie initially was because I wanted her to help me feel more comfortable in the classroom environment, where my Post-Traumatic Stress Disorder from my time in the army with multiple tours to Iraq and Afghanistan tends to make me easily startled and very nervous,” Green said.

Nellie has a calming effect on Green, whether it would be at home, in the car or in class. Nellie is there to subside the anxiety, flashbacks, nightmares and other symptoms that come with PTSD.

“The number one thing that she helps me with are the nightmares and flashbacks related to my PTSD,” Green said. “She is able to tell when I am in a flashback or beginning to have a nightmare and to help snap me out of it. It’s easy to be calm now.”

“The number of service animals are growing, but it is still fairly slow,” Dethlefs said. “It isn’t like just going to a store and saying I want that dog. It’s a whole process.”

The process of getting a service animal is invasive to say the least. Applicants have to go through a background check, submit references, a financial background check and a check for housing stability.

Along with the long and drawn out process of getting a service dog, there is a stigma that surrounds students who have service animals. According to Corene Seymour, an administration assistant at CASS, one of the best ways to erase that stigma is to see other students who embrace service animals.

“If you have an owner that has PTSD and has a dog and you got someone else that has PTSD, they can explain how the dog works,” Seymour said. “By association, the second person is more likely to take the time to invest in at least looking at a service dog.”

Seymour is also an owner of a service dog herself and has another dog in training, which she has for a hearing problem.

The dilemma of distinguishing between a pet and a service animal could be done through this registry. According to Dethlefs, there have been cases of pet owners buying fake service dog vests online to pass their dogs off as service animals to bring them into stores, restaurants and plane rides.

Dethlefs said that the policy on service animals would become even more comprehensive in the years to come, especially in terms of making changes and fixing mistakes within the document, such as the lack of a service animal registry. Instead of waiting four to five years for updates to the policy, changes could possibly be made on a year-to-year basis.

“What we’ve got here with this (policy) is a lot of new information that was not listed elsewhere,” Dethlefs said. “We knew that we had to get it into place as soon as possible, but because there has been so much abuse, I do expect this to be a fluid document that will need to be updated every year.”