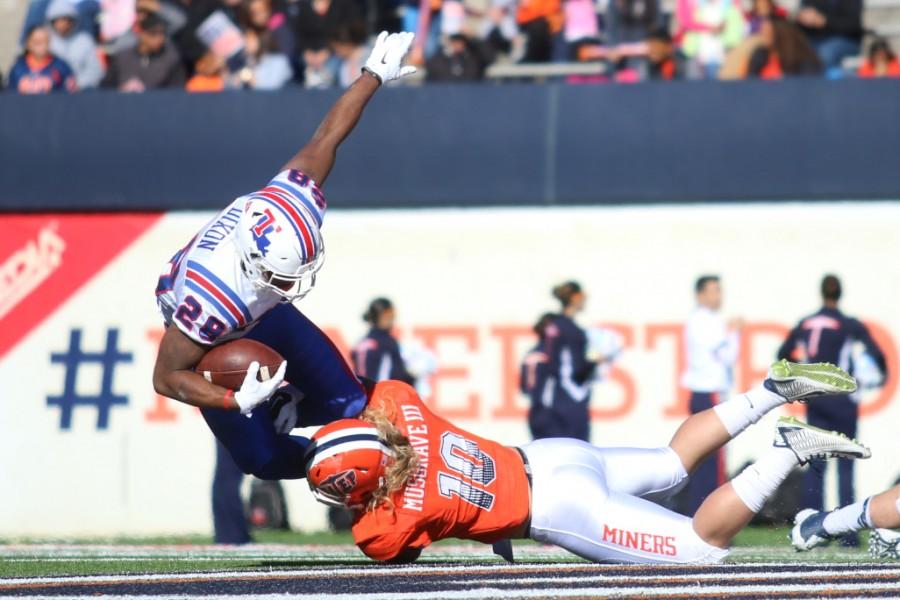 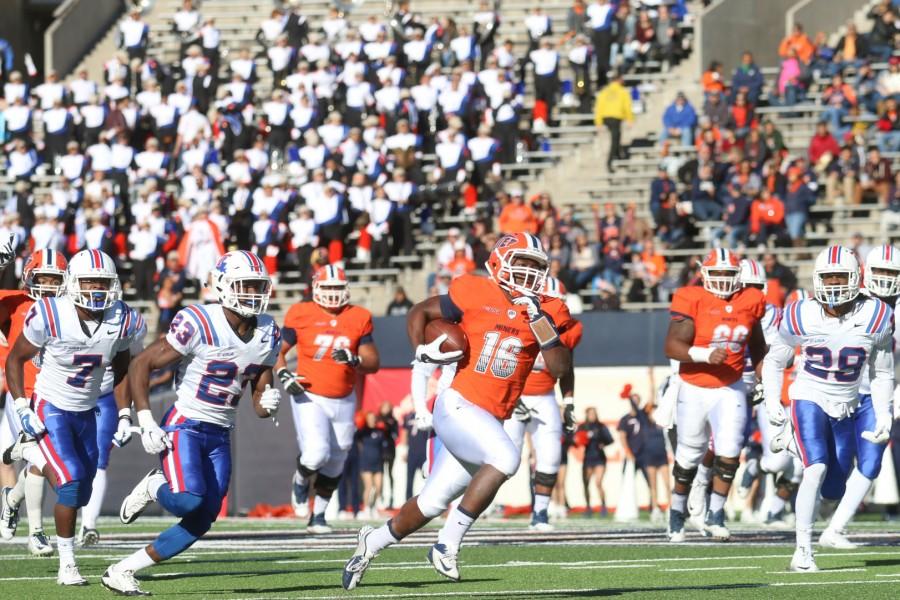 In the beginning it was sunny, slightly chilly, and decently attended. By the end of it was dark, cold, and empty at the Sun Bowl stadium as the UTEP football team lost to Louisiana Tech 17-15 on senior day.

It was a heartbreaking loss for the Miners to say the least. The seniors failing to win at the Sun Bowl for their final time, coupled with a seventh loss that now eliminates any chance of the Miners securing a bowl bid left a dark cloud over the 50,000 seat stadium.

Nevertheless, the players held their heads high and it was reiterated by head coach Sean Kugler in the post-game press conference.

“I’ve been pleased with their fight all year,” said a frustrated Kugler. “We lost four more guys for this year and these kids are out their fighting. I just told them how proud I am of them. I’m more proud of these guys then after a win.”

The defense played their best game against one of the best offenses in Conference USA. La. Tech quarterback Jeff Driskel was neutralized 188 passing yards, 112 yards short of his per game average.

The bigger shocker was the non-existent running back Kenneth Dixon. The Miner defense has struggled all year stopping the run and in past seasons, Dixon gave the Miners nightmares. Today was different, Dixon was held to a season low 39 rushing yards on 19 attempts.

The defense found a way to do their job, but the Miner offense could not move the ball. Freshmen quarterbacks Kavika Johnson and Ryan Metz split time under center, but they were not effective at the end of the day.

Their final numbers combined were, 17-for-38, 166 passing yards, one touchdown, one interception, with 63 rushing yards on 18 attempts. The Miners struggled to find a consistency in the pass game, but freshman running back TK Powell had a brilliantly game, finishing with a career high 127 yards on 16 attempts.

“Every yard was generated by a freshman,” Kugler said. “Metz, Kavika, TK, that’s where we’re at. They did a hell of a job and the offensive line played their ass off, just like the whole team did.”

Although the Miners did not produce much on offense, the opportunities were there for the Miners to win the game. With less than two minutes left in the game and the clock ticking, kicker Jay Mattox’s 32-yard field goal attempt was pushed wide left. The wind was swirling all game long and it did play a factor in the special teams play.

After the game the football team gathered and sat in the middle of the field to watch the farewell video for the 20 seniors. Some of the more notable seniors who played their final game today were; Roy Robertson-Harris, Jimmy Musgrave, Autrey Golden, and Nick Dooley.

Very few fans stayed after the game to honor the seniors, the players as well did not stay on the field for the duration of the video.

The devastating loss gave the feel that the season is over, but the Miners have one more game. For the last time this season the Miners will hit the road, this time to face the North Texas Mean Green in Denton, Texas next Saturday.

Despite his team being depleted at every position, coach Kugler was adamant that his team would keep fighting.

“This program is always going to fight,” Kugler said. “As long as I’m the freaking head coach here we’re gonna fight. We ain’t gonna win them all, but we’re gonna fight and we ain’t never gonna quit, I tell you that much.”