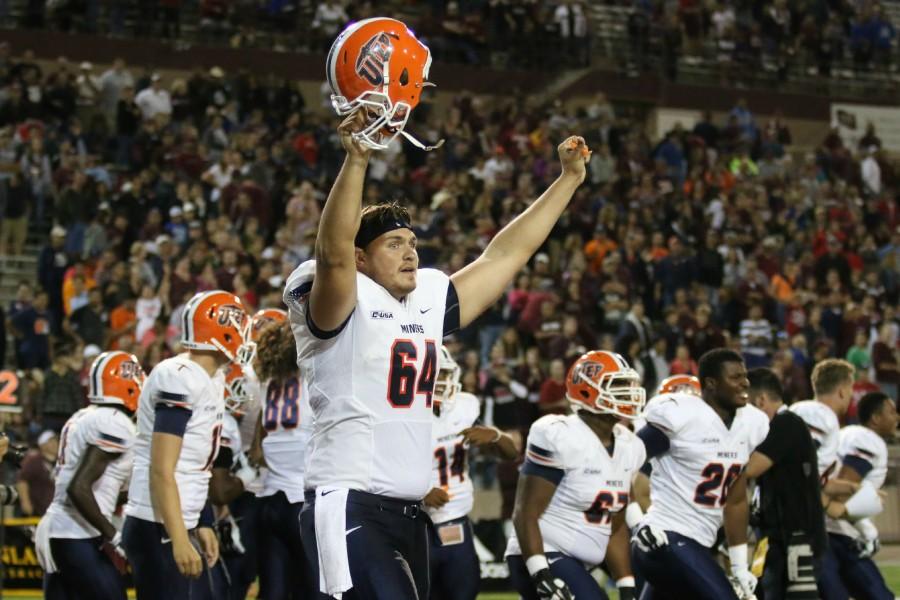 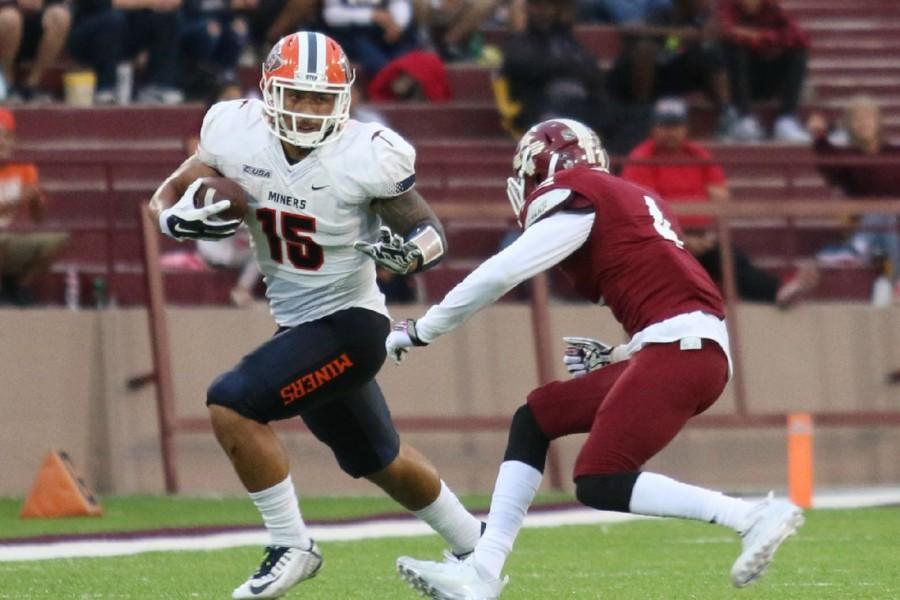 The 93rd meeting between the UTEP Miners and the NMSU Aggies kicked off on the Battle of I-10 at Aggie Memorial Stadium. The Miners defeated the Aggies 50-47.

Both teams entered the game at 0-2 and looking for a turn around game for the season. The Miners who had a six game winning streak against New Mexico would be trying to get any momentum they could to last them through their third and last road game before they have their first home game of the season.

“Like we said during the middle of the week we are going to do what ever we have to do to win the game, this game wasn’t about scheme or anything like that, this was a game with a group of kids that refused to quit, refused to loose.” Coach Kugler said.

It took New Mexico state six plays, and 75 yards to go up early in this one. The aggies were able to confuse the Miners early in their drive that took a better part of three minutes off the clock to give NMSU quick momentum.

With running back Aaron Jones out for the season, the Miners were going to have to change up their offense in this game.

For a moment in the first half the Miners and Aggies seemed to be in this game for a high scoring offensive game. The shoot out would not last aside from being tied at 7-7 with 8:38 in the first quarter after both teams hit a momentary plateau.

After the first half the Miners and Aggies slowed down to a score of 16-9 Aggies. The Miners in the first half had a totaled over 200 yards but never had a red zone opportunity to score against a good Aggie defense.

A scary moment for the Miners and the offense who has already felt the woes of an injured player. On third down of the opening drive of the second half, quarterback Mack Leftwich left the field assisted by trainers after he got hit running up the field trying the pick up a first down. The hit to Leftwich led to a fumble and the quarterback to be sidelined to have backup Ryan Metz play. Leftwich would not return to the game.

The injury would lead to Ryan Metz to turn the ball over in his first possession. After two illegal substitution penalties, Ryan Metz threw it right to the arms of a New Mexico State Defensive back for an interception to put the Miners down 23-9.

The Miners were not done, Darrin Laufasa on third down ran for 67 yards and a touchdown to bring UTEP closer to equalizing at 23-16.

This became a game of momentum quickly; the Aggies were able to control most of that momentum due to their offense. The Miners however came to play as well.

After a quick touchdown by the Aggies the Miners offense responded. They drove 75 yards down the field to respond with a Ryan Metz touchdown to bring the Miners within seven, Aggies led 30-23.

The Miners were not done attacking the New Mexico State University lead, they got their special teams to contribute to the efforts. Jaquan White fielded a 45-yard punt and he took it to the house to bring the game to a tie at 30 a piece.

The Miners however were not going to quit in the last two minutes. With the early season record weighing against them, and this being a rivalry game, UTEP was able to rally to tie the game with a 98 -yard drive capped off by a Ryan Metz touchdown.

“I think we knew that it was all business and these guys just responded, and I mean the receivers made me look good because trust me not every pass was perfect, but these guys bailed me out.” Ryan Metz said.

In overtime, each time had a possession, which resulted in a field goal for the Aggies. The Miners were able to convert on third down to set up a first and goal. After a one-yard run the Miners had a second and goal from the six. It was a roll out run from Rayn Metz that turned into a pass to the back of the end zone for Cedric Lane that gave UTEP the win.

“These receivers just made me look good, they caught the ball not a lot of those passes were smart decisions but these guys really made me look good, that what it was all bout all 10 guys stepped up I know I’ve said that before but its true it’s a team game, but these guys I love them so much, I’m so proud of them, I couldn’t be more proud to be on this team right now.” Metz said.

Ryan Metz ended the game with over 200 passing yards and three touchdowns to lead the team to a road win. The Miners offense had a total of 542 yards and held the ball for over 20 minutes more than the Aggies in the road win.

The Miners had a rough start to this historic win but were able to win in a team win that will likely help them down the road.

In a game that had it all it was UTEP that was able to come out on top of their rival Aggies. The Miners not only won the 93rd meeting against The New Mexico State University Aggies but have now improved to 1-2 overall and will prepare for Incarnate Word.