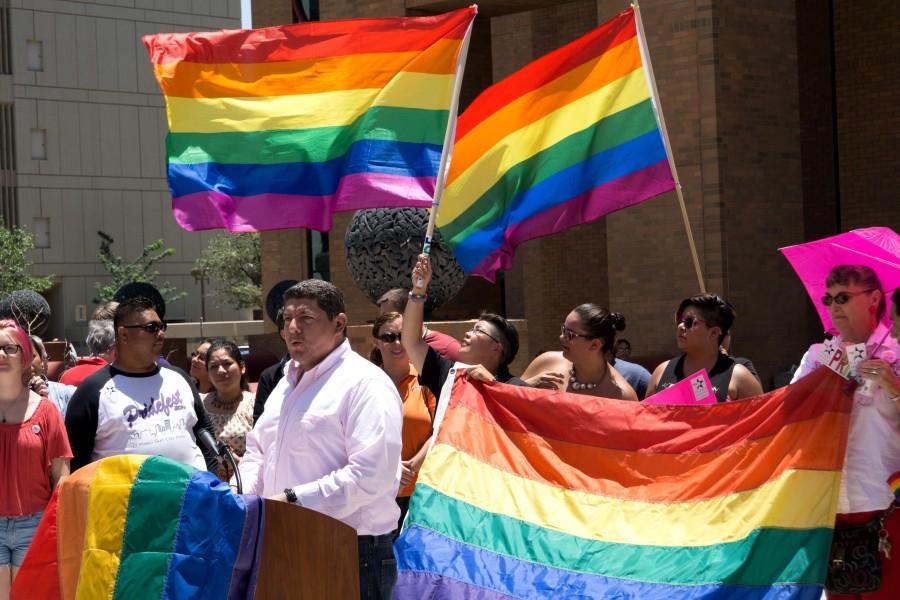 El Pasoans rally after the Supreme Court ruled in favor of marriage equality in all 50 states.

El Paso couples rush to get marriage licenses and tie the knot at County Courthouse.

Gallery|9 Photos
Adam Ziegenhals
El Pasoans rally after the Supreme Court ruled in favor of marriage equality in all 50 states.

In a landmark ruling, The Supreme Court decided in favor of marriage equality in all 50 states on Friday. This ends the possibility of states banning same-sex marriage and must now recognize same-sex unions as legal. The LGBTQ community has been handed a victorious torch after decades of advocating for their civil right to legally wed.
In a divided five to four ruling, one of the most controversial and lengthy civil debates and human rights movement has seen finally seen it’s triumphant day.
Supreme Court Justice Anthony Kennedy wrote for the majority, “no union is more profound than marriage. In forming a marital union, two people become something greater than they once were. They ask for equal dignity in the eyes of the law. The Constitution grants them that right.”
The debate of same-sex marriage has been called one of the most pressing civil matters of this era. It has spurred much controversy between state and church officials and amongst political constituents.
William Weaver, law professor and director of the Law School Preparation Institute at UTEP, said the court’s decision is “transformative.”
“The court’s decision is a sweeping one,” Weaver said. “In terms of law, it’s monumental. It’s up there. The decision is historic. The court usually isn’t likely to make a universal decision like this because they’re usually based on morals, but it did today.”
Weaver said he expects the ruling will be offset by difficulties at the municipality level.
“There is going to be a lot of small-town mentality fighting the ruling, especially in the South,” Weaver said. “Many small towns will object to upholding it, and we’ll see law suits. But it’s federal law now. The book is closed. We’ve turned the page.”
Weaver said essentially, this case will be handled by state and city judges if resistance toward the law is presented.
Texas Governor Greg Abbott sent out a memo to all heads of state agencies stating they must protect the religious freedom of all Texans in light of the Supreme Courts same-sex ruling.
“I expect all agencies under my direction to prioritize compliance with the First Amendment to the United States Constitution, Article I of the Texas Constitution, and the Texas Religious Freedom Restoration Act,” Abbott said in the memo.
“All state agency heads should ensure that no June 26, 2015 Page 2 one acting on behalf of their agency takes any adverse action against any person, as defined in Chapter 311 of the Texas Government Code, on account of the person’s act or refusal to act that is substantially motivated by sincere religious belief,” he added.
State Representative Marisa Marquez, D-El Paso, said in a press release that she is “overwhelmed with joy” about the ruling.
“My gratitude goes out to all the steadfast advocates these past several decades whose mission it was to demonstrate acceptance and inclusion,” Marquez said in the press release.
Jose Soto may be reached at [email protected]