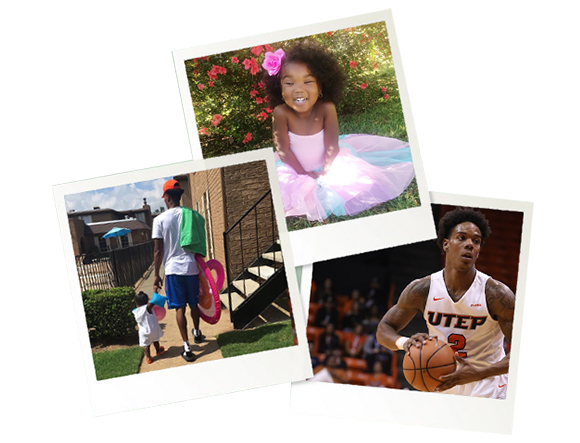 The inspiration behind the game for Omega Harris

Omega Harris is going to be in UTEP’s record book forever.  He ranks in the program’s top-15 in both points scored and steals collected, and he’s nearing a top five spot in program history in 3-pointers made since joining the program as a freshman in 2013.

Out of all the things in his life that keep him going and push him to become a better person and player every day, there’s one person in Harris’ life that he does it all for—his 2-year-old daughter, Khylynn, who is about to celebrate her third birthday in March.

“Khylynn and my mom are my inspiration every day. My mom is the one that kept my head on straight and taught me how to play basketball. I want to do the same for my daughter for what my mom has always done for me—which is a lot,” Harris said.

While in the midst of a tough senior season with the Miners, where he is still battling with his team for one final shot at ending UTEP’s eight-year drought of not making the NCAA tournament, his daughter lives with her mother and calls Mississippi home.

The distance is the most difficult part for Harris and his daughter, but he makes time to talk to Khylynn every day and makes sure to he’s always there for her either through phone calls or Facetime.

“It’s very tough being away from her. It’s been like that since the end of my freshman year and now it’s going on three years, but I’ve adapted to it, to where I could see her on the times that I can. That’s my baby girl, I miss her all the time,” he said. “Khylynn’s mom says that she always asks, ‘Where’s my daddy?’ and they just pick up the phone and call me whenever she misses me.”

Harris always puts his family first and never forgets who helped him get to where he is right now. He comes from a family full of support. On Harris’ Instagram page, he makes it known to his 6,000 followers who shaped him—his mother, Yolanda. Harris has posted pictures with her with captions saying he was going to miss her the most when he first moved to El Paso, how he’s determined to work so hard that she doesn’t ever need to again and how his mom is his favorite person in this world and that she’s an angel sent from above.

Not only has his mother shaped who Harris is today, but so has his grandma and father. They all combined to set the bar high on how to be a parent, and Harris is determined to meet that bar.

“Every day I wake up, I know I have my daughter, my mom and my grandma behind me,” he said. “I want Khylynn to know that I’m always going to be there for her. She’s going to know that anything she needs, I’m going to be there. She can come to me for anything at any time. That’s what my dad did for me. Everything that my parents do for me—I want to do that for my kid, but two times that.”

With the busy schedule of a student-athlete, sometimes Harris can only get a couple of minutes throughout the day to talk to his daughter on Facetime. But he does say that those are the moments he looks forward to the most.

However, one could argue that Harris does have more to play for on a nightly basis than a majority of student-athletes around the nation. After Harris hangs up his UTEP jersey for good after this season, he plans on making a living and career out of basketball. Although he doesn’t know or worry about where he’ll play after college—because his mind is completely focused on closing out the season strong for the Miners—he does plan on taking his talents to a professional basketball league.

“With someone like me trying to make basketball my career, I have a reason to continue to make this my career with Khylynn. School-wise, I don’t take for granted the opportunity UTEP has given me for bettering my education,” he said. “I want to be able to provide for my daughter to go to school later on, and I want to be that parent that makes sure she gets the best education and opportunities.”

What Harris wants his daughter Khylynn to know about his time at UTEP is that with all the ups and downs that he’s experienced in his college career, he’s always gotten up, fought through anything and learned from everything.

Overall, he’s become a stronger person and has slowly become the person he’s always wanted to be.

However, on the court this year, Harris’ senior season has not gone as expected. The senior has seen a six point drop in his scoring average (11 points per game) since last season (17 points per game) and while it could be as a result of a lower back injury that limited his minutes at the start of the season, it has not been the storybook ending the star player was hoping for thus far.

As a team, the Miners are currently riding a six-game losing streak that has plummeted their record to 7-17 overall and 2-10 in Conference USA play. As of now, UTEP is holding the 12th and final playoff spot needed to make the Conference USA tournament in March.

Despite his struggles this season, once his college career comes to an end, one silver lining at the end of it all is that he will have more time to see Khylynn.