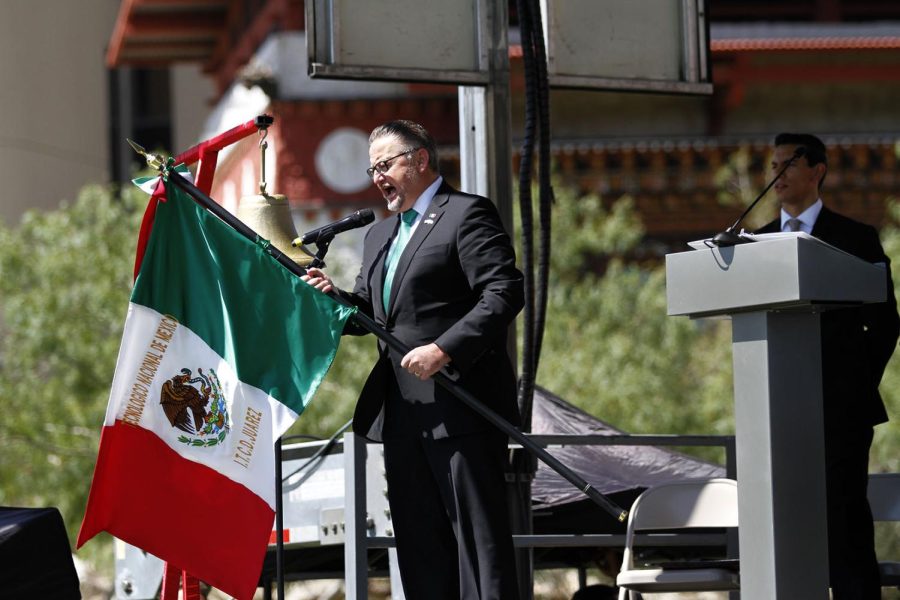 El Grito de Independencia, also known as El Grito de Dolores, is a celebration of Mexico’s Independence from Spanish rule. Every year, Mexican families and friends get together to celebrate and scream “Viva Mexico!” This tradition breaks country lines as UTEP celebrates its roots and traditions with its El Grito Ceremony.

The ceremony was held Sep. 15 and started with “El Grito de Dolores,” which is the battle cry for Mexican Independence of 1810. The Mexican consulate, other dignitaries from Ciudad Juárez, the Universidad Autónoma de Ciudad Juárez (UACJ) and their color guard were invited to the event.

The ceremony represented the unity between the bordering cities of El Paso, Texas and Ciudad Juárez.

El Paso was once part of Mexico, and this directly impacted the demographic of people in the area. The event served as a space to speak about the importance of Mexican independence and how it directly impacts our community.

This unique celebration highlights the people of the Paso del Norte region. The event celebrated Mexican traditions and the deep-rooted culture of the region.

The UTEP student population has a predominantly Mexican background and the event served as a recognition to students who are deeply connected to their roots and helped other students experience what it means to be a Mexican American.

Cassandra Blancas, a Mexican American student attending the event, expressed how the celebration made her feel more connected to her culture by watching everyone celebrating with so much passion.

“It’s symbolic of who we are as a university,” said Irma Montelongo Ph.D, current Director for the Department of Chicano Studies.  “Even though we are primarily ethnic Mexicans, we have a significant percentage of Mexican national students. That ‘mezcla’ of the two notions of what it means to be ‘Mexicano’ and the idea of being a ‘Mexico Americano’ fuses together at these events because we are directly impacted by it.”

“To me and maybe to other people it symbolizes this connection to who I am, and my ‘antepasados’. Nothing is ahistorical and if we didn’t have all of our history, we wouldn’t have each other,” Montelongo said.

Hispanic heritage month begins Sep. 16 and ends Oct.16. The month aims to celebrate Latin American cultures and traditions. UTEP will celebrate this month with a full set of events to highlight our Latino community.