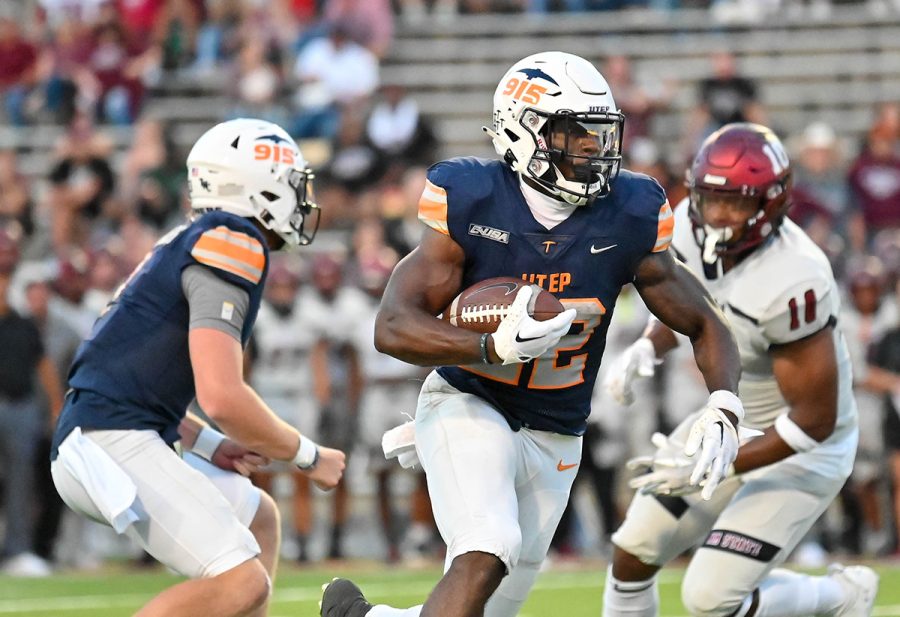 UTEP running back Ronald Awatt rushes the ball in a game against New Mexico State on Sept. 10.

The UTEP football team was back at home for the I-10 rivalry against New Mexico State University (NMSU). In the first half, the Miners had a slow start on offense, but the defense was able to give them the ball back with turnovers and strong play. The Miners offense capitalized and went up 16-0.

In the start of the second half, NMSU was able to put points on the board off a muffed punt.  The Aggies moved the ball very well, but the Miners defense answered the bell each time early on. The Aggies got some late momentum and tried to push the ball to the endzone, but the Miners were able to force a fumble and seal the game giving the Miners a 20-13 victory.

On the Miners first offensive series, the unit was having trouble moving the ball, until senior tight end Trent Thompson was able to get open and receive a pass from junior quarterback Gavin Hardison, for a first down past midfield. However, NMSU was able to tighten up and stop the Miners on third down.

The offense ended up staying on the field, with Hardison completing a pass to convert on fourth down. The Miners could not punch the ball in the endzone, which lead to a field goal to go up 3-0.

On the Aggie’s first offensive series, they were able to move the ball effectively by running jet sweeps to keep the Miners defense off balance. Defensively, the Miners were able to step up and force a turnover to give the ball back to the offense.

Senior running back Ronald Awatt, busted through the offensive line for a huge gain to put the Miners at the 20-yard line on the Miners second snap on offense. The Miners turned the ball over when approaching the goal line.

The Miners were able to hold on defense, forcing the Aggies to go three and out and punt the football late in the first quarter

In the early part of the second quarter, The Miners were moving the ball down the field, but were halted by NMSU’s defense on third down, forcing Hardison to throw an incompletion. That sequence forced the Miners to punt the ball.

At the 7:00 mark, the Miners were awarded a pass interference call, which ultimately led to a Hardison pass to sophomore wide receiver Tyrin Smith for a touchdown to go up 9-0 in this contest.

Near half time, the Miners defense was able to recover a fumble to give the ball back to the offense past midfield. Awatt was able to take the ball and run for a 22-yard rushing touchdown on the first play of the drive to go up 17-0.

In the start of the third quarter, UTEP’s defense was able to generate pressure to cause a sack, which made NMSU’s offense sputter out on third own. During a special teams play, the Aggies were able to recover a muffed ball and take good field position near the goal line.

The Aggies were able to score on that turnover, but the Miners were able to block the extra point attempt, keeping the score at 17-6.

On the next Miners offensive possession, Hardison was sacked on a third downplay due to NMSU’s pass rush. The Miners were forced to punt.

Towards the end of the third quarter, the Aggies were able to move the ball toward the endzone, due to the lack of pressure from the Miners. But the Miners defense was able to step up and force a field goal. During a three-point attempt by the Aggies, the ball missed the goal post, and the score remained 17-6.

The Miners were then able to drive the ball past midfield, but the offense could go no further as NMSU was able to stop them and force a field goal. The Miners were able to get three points to go up 20-6 at the end of the third quarter.

Later in the fourth quarter, the Aggies drove the ball down the field and were able to score on a quarterback rushing touchdown to cut the lead down to 20-13.

“I thought our pass rush was really good,” Dimel said. “There were about maybe four or five holding penalties that were missed in the game, that was the big part of it as well.”

The Miners now travel to Alburquerque to face the University of New Mexico Lobos at 6 p.m. Sept 17 at University Stadium.