Players to keep in mind for NFL Fantasy draft time 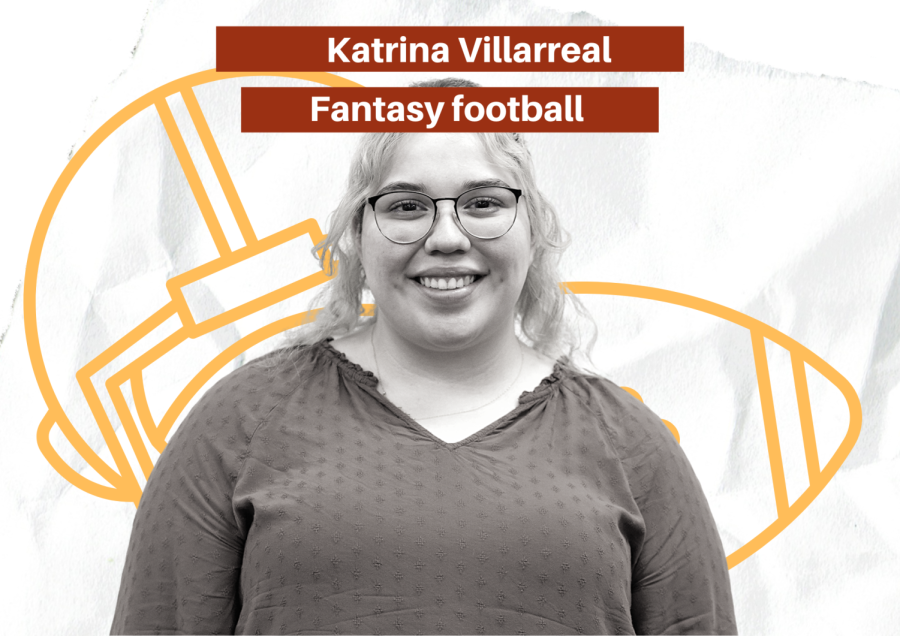 Editor’s note: This is the first of a three-part series on Fantasy Football.

With the 2022 National Football League season fast approaching, fantasy leagues are up and running. Here are the top three players in each position that you should consider drafting.

The first player is no surprise to the fantasy quarterback list: Buffalo Bills quarterback Josh Allen. Allen finished the 2021 fantasy season with a total of 402.58 points and is projected to record 22.4 points per game (PPG) this year. Allen finished eighth in yards with 4,407, seventh in touchdowns with 36, and sixth in quarterback rating with 60.7. He also ranked 13th in the NFL top 100. According to ESPN, Allen ran a career-high of 763 rushing yards and has been in the top 10 in average depth of throw. Allen’s ability to run and pass the ball makes him an ideal candidate for QB1.

Next, we have Kansas City Chiefs quarterback Patrick Mahomes. Mahomes finished with a total of 361.66 fantasy points, making him fifth among quarterbacks in fantasy; he is projected to record 22.6 PPG. Mahomes finished the 2021 season with 4,839 yards (fourth), 37 touchdowns (which he has done so in three of his last four seasons) and 62.2 quarterback rating (fifth), along with ranking eighth in the NFL top 100. According to ESPN, Mahomes recorded a career-high 381 rush yards. Despite losing his number one wide receiver target in Tyreek Hill, the play calling of Andy Reid and the outstanding offensive line should still make Mahomes an elite fantasy quarterback.

Lastly, we have Cincinnati Bengals quarterback Joe Burrow, also known as “Joe Shiesty.” After coming off a season ending knee injury, Burrow finished the 2021 sixth in yards (4,611), eighth in touchdowns (34) and 12th in quarterback rating (54.3). Burrow finished the 2021 fantasy season with a total of 314.24 points and is projected to record points per reception (PPR) of 18.2. Yes, it is a little on the low side but having the league’s best wide receiver room, he should record more points. Burrow took a league-high of 51 sacks, but after a makeover of the offensive line, Burrow should benefit tremendously. Burrow is questionable at the moment, but he should be ready to go for week one. Not only does Burrow have style off the field, but he also has it on the field, making him a great choice for quarterback.

Ranked number one in running backs is Indianapolis Colts running back Jonathan Taylor. Taylor finished the 2021 fantasy season with 373.1 points, the most among running backs. He is projected to record 21.8 PPG. Taylor got off to a slow start in the 2021 season but finished strong by ranking first in rushing attempts (332), yards (1,811) and touchdowns (18), along with ranking fifth in the NFL top 100. According to ESPN, Taylor’s 26 carries in the opponents five-yard line was the most in the league since 2012. With a new face at the quarterback position, Taylor could still have elite production making him an ideal selection for RB1.

There is no running back fantasy without the mention of Carolina Panthers running back, Christian McCaffrey. After missing the majority of the last two seasons due to multiple injuries, McCaffery is looking to make a comeback. Before his injuries, McCaffery was a top 15 fantasy pick in the games that he played. For the 2022 season, McCaffrey is projected to record 21.0 points this season. Injuries are a concern of course, but McCaffery’s production in the run game these past years make him a top five pick in fantasy football.

It is no surprise that Los Angeles Rams wide receiver Cooper Kupp is the number one wide receiver pick in fantasy football. Kupp finished the 2021 season first in receptions (145), yards (1,947) and touchdowns (16) among wide receivers. He also snagged a number four rank in the NFL top 100. Kupp finished the 2021 fantasy season with a total of 439.5 points in which he led among wide receivers and became the first player to triple-crown since 2005. His PPR this year is 19.6. After an amazing 2021 season, of course you would have to have Kupp at WR1.

Coming out of his rookie season, Minnesota Vikings Justin Jefferson is another wide receiver to consider drafting. Finishing second among wide receivers in yards (1,616) and fourth in receptions (108), we know Jefferson is going to be one to look out for. He also led the NFL in air yards (2,082). Jefferson finished the 2021 fantasy season with a total of 330.4 points and is projected to record 18 PPR. Jefferson ranked 17th in the NFL top 100. Jefferson is under a new head coach but is still a top choice at the WR position.

What is fantasy football without mentioning star wide receiver Davante Adams? Now a new member of the Las Vegas Raiders, Adams is still the wide receiver to look out for. Adams finished the 2021 fantasy season with 344.3 points (second among WRs) and top three in three of his last four seasons. He also ranked seventh in the NFL top 100. Adams has earned 30 plus points in six games, this year he is projected to earn 17.3 PPR. Now under a new quarterback, Adams has gone down a bit in fantasy, but he can still be an ideal player to draft.

Kicking off the tight ends is Baltimore Ravens tight end Mark Andrews. Andrews led the tight end group in targets, receptions, yards, touchdowns and end-zone targets. He finished the 2021 season with a total of 301.1 fantasy points and is projected to record 14.3 PPR. According to ESPN, Andrews’ fantasy points fluctuate on whether Ravens quarterback Lamar Jackson is on the field. With wide receiver Marquise Brown now with the Arizona Cardinals, this could mean more receptions for Andrews.

Next up is Mahomes’ favorite target, Chiefs tight end Travis Kelce. Kelce finished second among fantasy tight ends. According to ESPN, Kelce finished first in routes, touchdowns and top 10 in fantasy. He also finished second in targets, receptions, and yards. Kelce also earned a number 10 rank in the NFL top 100. Kelce finished the 2021 season with a total of 262.8 fantasy points and is projected to record 14.3 PPR. Continuing to be Mahomes favorite target, Kelce will be an ideal TE1, especially with wide receiver Tyreek Hill now with the Miami Dolphins.

With Darren Waller of the Las Vegas Raiders being questionable to play the first week due to a hamstring injury, I am going to give you the second-best tight end option, which is San Francisco 49ers’ George Kittle. Kittle finished the 2021 season with a total of 198 fantasy points, and he is projected to record a PPR of 11.3. Kittle has finished in fantasy PPG in each of the last four seasons. Despite missing two games in each of the last three seasons, Kittle is still the best blocking tight end and the best tight end in yards after catch. Kittle is a tight end option to keep in mind.

In the flex position you can draft any of the players mentioned above except for the quarterbacks, but let me give you a few players to think about for your flex. First, we have Green Bay Packers running back AJ Dillon. He led the Packers in rush yards and rushing touchdowns in the 2021 season. Another good flex option is Cincinnati Bengals wide receiver Ja’Marr Chase, who averaged the second highest yards per target with 11.5. Another good idea to draft as a flex is Buffalo Bills wide receiver Stefon Diggs, he recorded a career high in end zone targets (20) and was eighth among wide receivers in snaps, targets, receptions, yards, touchdowns, and fantasy points.

With the newest addition of safety Tyrann Mathieu and the talents of linebacker Demario Davis, defensive ends Cameron Jordan and Marcus Davenport combined; the New Orleans Saints are the top defense/special teams to draft for your fantasy team. They are projected to record 8.9 PPR. According to ESPN, in the last five seasons the Saints have ranked seventh or better in yards and points allowed per game.

The next defense/special teams are the San Francisco 49ers who according to ESPN, ranked first in forced fumbles, fifth in sacks and top 10 in points allowed per game. The 49ers are projected to record 8.6 PPR. With the defense stacked with players such as defensive end Nick Bosa, linebacker Fred Warner, safety Jimmy Ward and defensive end Arik Armstead there is no doubt that this 49ers team would be a good starting option for your fantasy football league.

Rounding out the defense and special teams is the Indianapolis Colts. According to ESPN, the Colts defense/special teams finished top 10 in fantasy points in each of the last two seasons, They are projected to record a 7.6 PPR. With star players like 2021 first round pick defensive end Kwity Paye, defensive end Deforest Buckner, linebacker Darius Leonard, cornerbacks Kenny Moore and Stephen Gilmore, the Colts could be an option for your defense/special teams.

Starting off strong for the kicking position is Cincinnati Bengals kicker Evan McPherson, also known as “Money McPherson.” During his rookie season, McPherson became one of the best kickers in the league, connecting on 42-of-47 field goals with a hit rate of 89.4 percent. McPherson’s total fantasy points of 2021 was 149.0 and he is projected to record a 9 PPR. McPherson is the person you want as your fantasy kicker.

Next up is Los Angeles Rams kicker Matt Gay. Gay made 32-of-34 field goals in the 2021 season and had a 94.1 percent hit rate. Gay totaled 157.0 in fantasy points last year and is projected to record 8.9 points in PPG. If you are looking for a champion kicker, Matt Gay is your guy.

Closing it out is none other than Baltimore Raven kicker Justin Tucker. Tucker continues to be the best kicker in the NFL making 35-of-37 field goals with a hit rate of 94.6 percent (a league high). Last year, Tucker made the longest field goal kick (66 yards) in the history of the NFL versus the Detroit Lions. Tucker totaled 161 fantasy points last year and is projected to record 8.4 in PPR. Tucker is an elite kicker you want to have on your team.

Stats for all players mentioned courtesy of ESPN Sports, espn.com