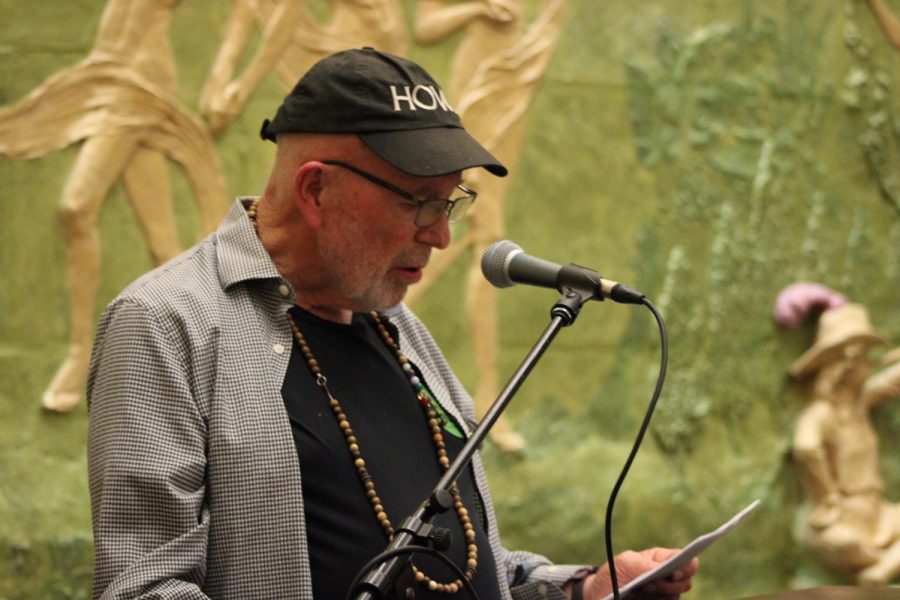 He was born and raised in Memphis, Tennessee and moved to El Paso with his wife and children in 1978. In 1985, Bobby and Lee Merrill Byrd co-founded Cinco Puntos, honoring the name of their neighborhood in El Paso – Five Points. Ever since, their passion for literature and arts allowed them to connect with the most recognized local authors, who have often described them as a leading voice for the Latino literary world and beyond.

Byrd was a guest speaker at the Homenaje to Benjamin Alire Saenz, hosted by the College of Liberal Arts, April 20 at the El Paso Community Foundation. He was one of the literary voices that spoke about the impact Ben Saenz’s book had and the success of his career. While speaking about El Paso’s role in the arts, he mentioned how he and his wife Lee felt at home when they arrived in El Paso.

Cinco Puntos Press, now owned by New York’s publisher Lee & Low Books, is the publishing home of more than 300 publications and renowned authors such as Benjamin Alire Saenz, Sergio Troncoso, Alessandra Narvaez Varela, and many others.

Illustrator Geronimo Garcia, who has done a lot of work for Cinco Puntos Press, said he has known Byrd and his wife for about a quarter of a century.

“Their publishing house greatly contributed and preserved to the local history and flavor of the area,” Garcia said. “I think Bobby was more El Pasoan than people born here. He loved the culture and respected people from all walks of life.”

The Byrds were awarded by the National Endowment for the Arts, Texas Commission for the Arts, the Border Regional Library Association, Southwest Book Awards, and have received grants from the Fideicomiso para la Cultura de México y Estados Unidos (funded by Bellas Artes and the Rockefeller Foundation). The couple has been an inspiration for local writers and editors to go beyond their comfort zone and follow their dreams. Such is the case of Jessica Powers, who founded her own African-based publishing company after crossing paths with the Byrds.

“I knew Bobby since January of 2002, when I started working for Cinco Puntos. We worked together for the past 21 years. He was my boss, my mentor, my friend, and like a father to me,” Powers said. “Bobby was unapologetically committed fully to publishing books that emerged authentically from Mexican and Mexican American culture, to publishing bilingual books for kids, and to the border as a region.”

Local authors who published their works through Cinco Puntos have expressed deep sorrow, not only for their publisher, but for their fond friend.

“I admired him for this commitment to the art with a social conscience, for his poetry, and for the friendship we had. I find it hard to think about El Paso without him,” said El Pasoan author and editor Sergio Troncoso. “Today I am thinking of his family, particularly Lee Byrd and Susie Byrd, their daughter. My deepest condolences to them and everyone in their family. I will sorely miss Bobby Byrd.”

Besides connecting through the love of literature, people found comfort in him through the practice of Buddhism, to which he was not only a practitioner, but a priest.

“I’ve known of Bobby and his work since 2001, but finally got to know him on a more personal level in 2014 once I moved to El Paso,” said writer, scholar and co-host of “Words on a Wire,” Tim Hernandez. “I have always felt that being in a meditation circle with Bobby was perhaps the experience I will hold most dear to my heart. Bobby was always professional, but also never took himself so serious that he forgot that at the end of the day the people and stories are what matter most. He left us all a fine example of what it means to be a benevolent human on this often-hard earth.”

Powers said she will miss Byrd’s “open-hearted, wide-mouthed laugh” and his empathy and love for those around him.

“The world needs more people like Bobby that think thoughts like him and don’t let life get under your skin. He is an original,” Garcia said. “(He) will be missed greatly. He also has a wonderful family (his three children) that truly is a reflection of him and Lee and their values.”

One of Bobby’s last poems published for his birthday on his blog “White Panties and Dead Friends” reads as follows:

A Poem for my 79th Birthday

in the Milky Way.

Maria L. Guerrero Duran is the web and copy editor and may be reached at [email protected]; @bymariaguerrero on Instagram and Twitter.