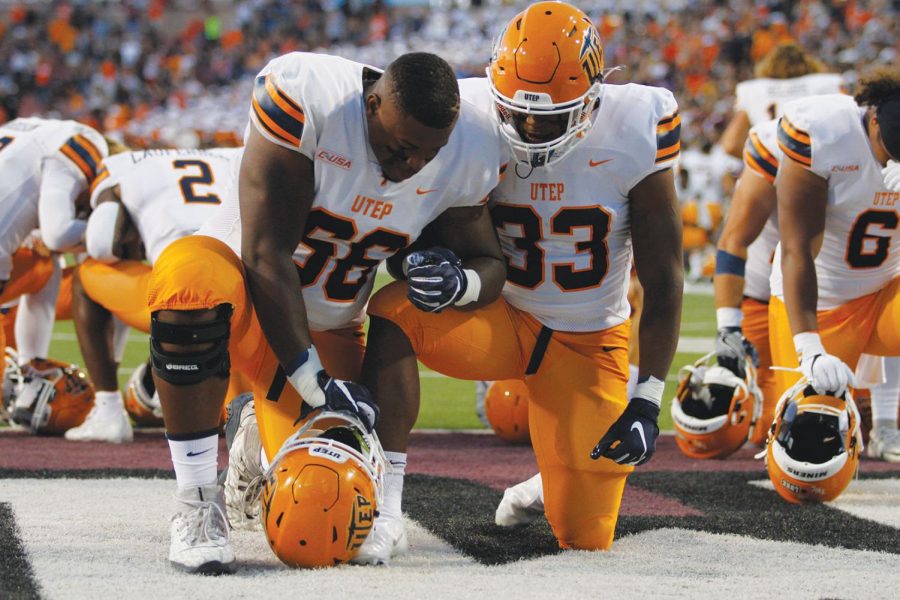 UTEP Athletics has announced the 2022 promotional schedule for home games being held at the Sun Bowl Stadium. The home games will feature different themes each night, along with different sponsors for each of the theme nights.

UTEP will kick off the 2022 season with “915 Night,” sponsored by GECU 7 p.m., Aug. 27 against Conference USA rival North Texas. The Miners are looking to sell out its first home game at the Sun Bowl Stadium since 2008. To achieve this, UTEP has held and is still holding various “915” events where fans can buy tickets to the first game for $9.15. So far more than 30,000 tickets have been sold for the home opener against North Texas with the Sun Bowl capacity being 45,971.

If Miner fans are unable to attend the remaining “915” events, they are able to purchase tickets to the UTEP vs. North Texas game by scanning a QR code at any GECU and Jack in the Box location.

“We are so thankful to everyone that has gotten on board with our ‘915’ Campaign and purchased a ticket to the ‘Sun Bowl Sellout’ game against North Texas,” UTEP Director of Athletics, Jim Senter, said in an article by UTEP Athletics. “To be over 65 percent of the way to capacity at this point is just amazing! It’s going to be an electric atmosphere and we’re excited about making the Sun Bowl the place to be on Aug. 27.”

The Miners will be facing off against rival New Mexico State University for the Battle of I-10 at 7 p.m. Sept. 10. The theme for that game will be Noche Latina, sponsored by Las Palmas Del Sol, to kick off Hispanic Heritage month. UTEP will pay tribute to Hispanic Americans that have influenced and enriched our nation along with our society.

The Miners will take on Boise State at 7 p.m. Sept. 23 for Hall of Fame/Education Night sponsored by GECU. UTEP will honor the 2022 Athletics Hall of Fame class during halftime, which includes Fred DeBernardi, John Furman, Johnnie Lee Higgins, Jennifer Smit, the 1974 volleyball team, along with the 1974-75 women’s basketball team. Educators of the area will be celebrated and UTEP Athletics will participate in the College Football Playoff’s “Extra Yard for Teachers” initiative.

UTEP is set to face Florida Atlantic at 2 p.m. Oct. 22 for Military Day, sponsored by Pepsi. UTEP will honor the brave men and women of the Armed Forces who call El Paso home, as for two centuries Fort Bliss has been a part of El Paso.

The Miners take on Middle Tennessee for Homecoming/UTEP Cares night at 7 p.m. Oct. 29, sponsored by Las Palmas Del Sol. This marks UTEP’s 90th Homecoming game, where UTEP alumni from all over return to El Paso. UTEP will be hosting different festivities during the week to celebrate Homecoming.

For the last home game of the 2022 season, the Miners will host Florida International University at 2 p.m. Nov. 19 for Senior Day/Fan Appreciation. UTEP will celebrate and bid farewell to the 2022 senior class during the final home game. UTEP will also celebrate the fans in attendance by giving them the opportunity to win prizes and experiences.

For information on how to purchase tickets to any of the games mentioned, fans can visit www.UTEPMiners.com/Tickets. Miner fans can also visit the Eisenberg Family Ticket Office, located at 201 Glory Road (Brumbelow Building Room 109), call 915-747-UTEP, or email [email protected] The Ticket Office hours of operation are Monday through Friday, 8 a.m.- 5 p.m.