‘Thor: Love & Thunder’ reflects the journey of finding yourself 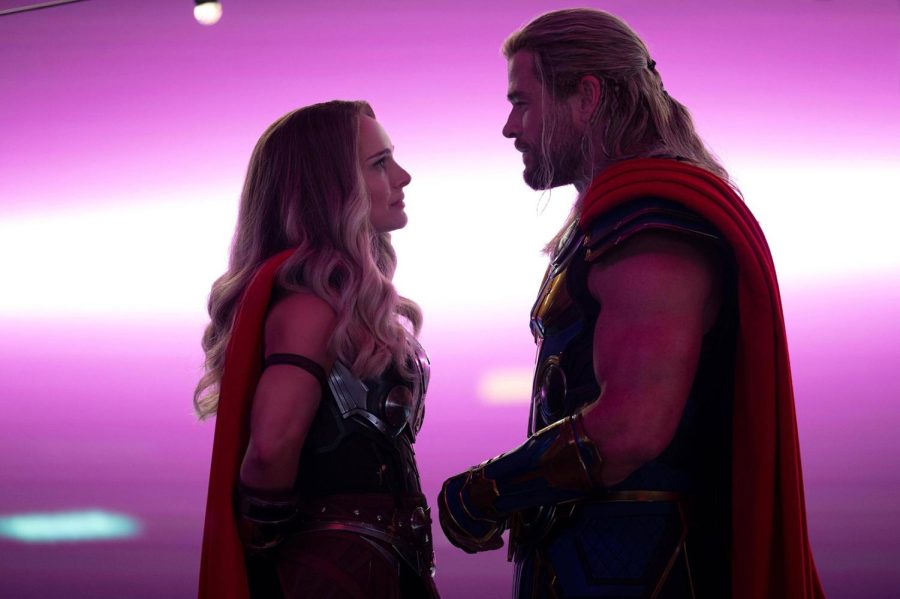 Marvel is halfway through phase four after the release of “Thor: Love & Thunder.” The movie is the sixth film to be released since the ending of the Infinity Saga and does not disappoint as it is very similar to “Thor: Ragnarok,” a movie that Marvel audiences adore. Director Taika Waititi has once again delivered the audience with further insight into the ‘God of Thunder’ using comedy, romance and action.

Thor Odinson (Chris Hemsworth) has been through his fair share of trauma throughout recent Marvel films from the loss of both his parents, his brother and friends.

It is because of these recent experiences that at the end of “Avengers: Endgame,” Thor is at a loss for what to do next, so he joins ‘The Guardians of the Galaxy’ on their journey back to space to begin whatever new adventure lies ahead.

This movie follows Thor, not only on his journey of finding himself again, but dealing with a new enemy, Gorr (Christian Bale). Gorr is infamously known throughout the galaxy as the ‘god butcher,’ and has his eyes set on Thor as his next target in order to complete his vow to annihilate all gods.

Fans will be excited to see the characters introduced in “Thor: Ragnarok” return to fight alongside Thor. These characters include Valkyrie (Tessa Thompson), the newest King of Asgard, Corg (Taika Waititi) and Miek (Carly Rees). After Thor appointed Valkryie as the newest King of Asgard at the end of “Avengers: Endgame,” the changes she made to Asgard are seen as she embraces her new role throughout the film.

Fans of Jane Foster (Natalie Portman) got to see her return to the Marvel franchise in a new light as she became ‘The Mighty Thor’ after wielding Mjölnir. Throughout the film, Jane is seen adjusting to the lifestyle of not only becoming a hero and learning to fight alongside Thor and his friends, but also battling something in her personal life.

Fans of Jane and Thor as a couple also finally find out what happened between the pair almost nine years after their breakup and see the pair adjust to being around each other again when feelings still linger, even amid battle.

Marvel Studios delivered yet another blockbuster hit, and fans can expect to see Thor on screen again after both the conclusion of the film and end credit scenes set his storyline up for future adventures. Overall, this movie is a 9/10 and is available to watch exclusively in theaters everywhere.

Emily Autumn Velasquez is the editor in chief and may be reached at [email protected]; @emilyautumn20 on Twitter, @byemilyautumn on Instagram.