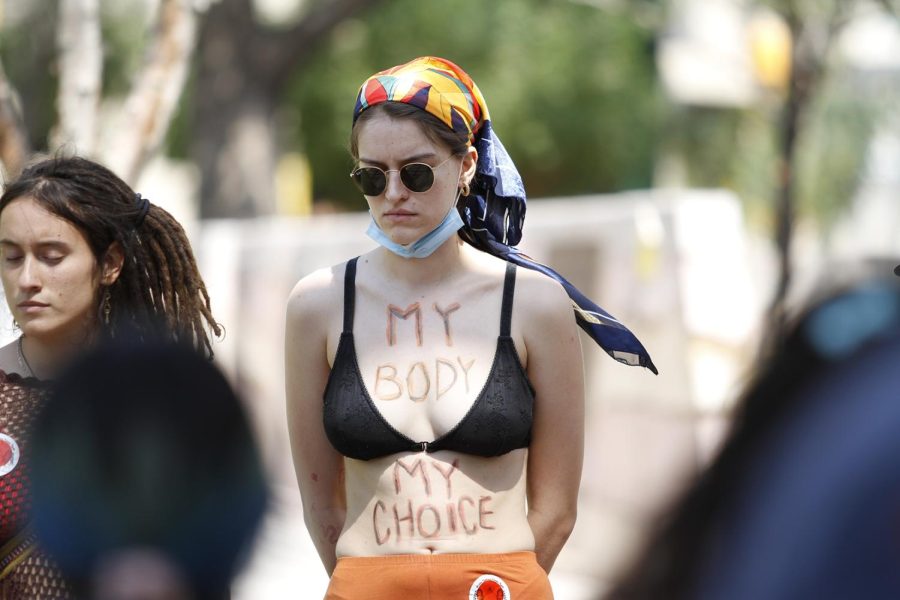 A protestor listens to a speech with the words “my body my choice” written all over her body during a pro abortion protest in downtown El Paso on June 6,2021.

Women’s constitutional right to an abortion by Roe v. Wade was overturned in a 5-4 vote by the Supreme Court after nearly 50 years.

Since 1973, Roe v. Wade granted women the right to access abortions during their first two trimesters of pregnancy in the United States

“The court has done what it has never done before—expressly take away a constitutional right that is so fundamental to so many Americans that had already been recognized,” Biden said.

The official decision comes after Politico leaked an initial draft opinion in May 2022 by the Supreme Court voting to strike down Roe v. Wade.

The Supreme Court’s ruling will allow states to set their abortion laws without concerns of conflicting with Roe.

In September 2021, Texas placed a near-total ban on abortions starting as early as six weeks. The strictest abortion law in the nation.

According to ABC News, 26 states are expected to ban or severely strict abortion, causing mixed opinions among politicians and the public.

Mark Cavaliere, executive director of Southwest Coalition for Life, a nonprofit organization that focuses on uniting the pro-life community in the borderland, said this is just the beginning of the pro-life movement.

“Since January 22, 1973, we have been fighting the injustice against women and preborn children at the hands of a predatory abortion industry,” Cavaliere said. “Take the time to cherish this moment. But for us here in the Borderland, our work is only beginning, as we have just become the new battleground in the next era of the pro-life movement.”

President Joe Biden spoke about the Supreme Court ruling and called it a “tragic error” and said it was a “sad day” for the country.

“Roe v. Wade protected a woman’s right to choose, her right to make intensely personal decisions with her doctor,” Biden said. “It reaffirmed basic principles of equality. And it reinforced the fundamental right of privacy — the right of each of us to choose how to live our lives.”

Biden asked congress to restore the rights of Roe v. Wade as federal law and urged the public to vote.

“I know so many women are now going to face incredibly difficult situations. I hear you. I support you. I stand with you,” Biden said.

According to the Washington Post, in other countries, abortion is protected by law and not just by court decisions, including South Africa, Russia, Ireland, and Vietnam.

Gregg Abbott expressed his support for the Supreme Court ruling and reassured that Texas will continue to fight for the lives of unborn children.

“The U.S. Supreme Court correctly overturned Roe v. Wade and reinstated the right of states to protect innocent, unborn children,” Abbott said.  “Texas is a pro-life state, and we have taken significant action to protect the sanctity of life.”

Beto O’Rourke urged citizens to act and insisted that this moment demands action.

“I will fight for a woman’s freedom to make her own decisions about her own body, health care, and future,” O’Rourke said via Twitter.

Former first lady Michelle Obama said she is heartbroken that women lost the fundamental right to decide about their bodies.

“I am heartbroken that we may now be destined to learn the painful lessons of the time before Roe was made law of the land — a time when women risked losing their lives getting illegal abortions,” Obama said.

El Pasoans have previously gathered outside the federal courthouse in May 2022 over the possibility of the supreme court overturning Roe v. Wade. The Borderland Rainbow Center asked the public to attend the “Roe Has Fallen, Rise Up” event at 7 p.m. June 24 at the San Jacinto Plaza to protest for women’s rights.

“The more we allow pessimism to push us further into helplessness, the less we will be empowered to help create the kind of country we want to live in,” Obama said.

Victoria Rivas is a guest contributor and may be reached at [email protected]; @VicRivas_18 on Twitter.