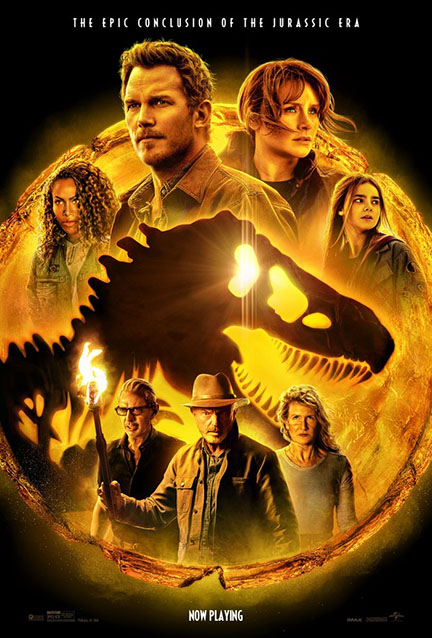 Jurassic World: Dominion is the last movie in the franchise that brings old and new characters together and was released June 10 in theaters everywhere.

The Jurassic World saga has come to an end with the release of “Jurassic World: Dominion,” but not without leaving viewers overwhelmed and bored.

From the start of the movie, the use of social media trying to recap the past two movies while trying to push the ideas of this movie feels forced, especially with the use of NOWTHIS. Using this relevant news source to start the movie makes it feel not only cheap, but like it has no sense of direction, with a desperate need for approval by a newer generation of fans.

Throughout the film we catch up with not only old characters like Alan Grant (Sam Niel), Ellie Sattler (Laura Dern), and Ian Malcom (Jeff Goldblum), but the newer characters introduced in the Jurassic World series Owen Grady (Chris Pratt), Claire Dearing (Bryce Dallas Howard) and Maise Lockwood (Isabella Sermon). However, with the lack of storytelling, the old and new characters grow no relationships to improve the movie. Rather, they only help one another out when their paths cross, leaving the relationships to feel like nothing more than filler.

Along with the weird “filler friendship” both sets of characters build, the movie lacks foundation with the plot. The central plot gets lost in confusion as there seems to be too many plots for one movie, further pushing the idea of the direction taken with this film was to put anything and everything into less than three hours. From unnecessary characters to the dinosaurs not even being the focal point of the film, Director Colin Trevorrow misses the mark on what could have been a great ending.

It appears the newer characters hardly had any character development in this franchise. Rather than the relationship between Owen and Claire and them “adopting” Maise, the dynamic between the three seemed so forced it felt uncomfortable to try and watch them be a family. This is seen throughout the film as both Owen and Claire try to get Maise back; another plot added to the other six continuously happening throughout the film.

The movie even focuses on how locusts are scientifically changed to create a lack of food source and how the “villain” of the film, Biosyn, is trying to control the world’s food necessity. Yes, this is yet another plotline that is not about the dinosaurs that make the Jurassic series a staple. Adding to the plot, we find out Biosyn has captured Maise to study her DNA for future projects.

Sadly, the dinosaurs seem to have no role in this movie other than small nostalgic effect for those who have seen not only the Jurassic World series, but its predecessor the Jurassic Park series.

In order to make up for the lack of a plot and the mass confusion, Goldblum’s and Kayla Watts (DeAnda Wise) small sarcastic humor can keep audiences laughing, but the humor is not enough to enjoy the entire film.

Besides the nostalgic feel of seeing old characters back together and the ending fight scene against a T-Rex, the movie is no Oscar winner. It is a movie you should only see if you choose to be in awe of visual effects. Overall, the movie is a solid 4 out of 10. If you are feeling the need to watch it, “Jurassic World: Dominion” is in theaters now.