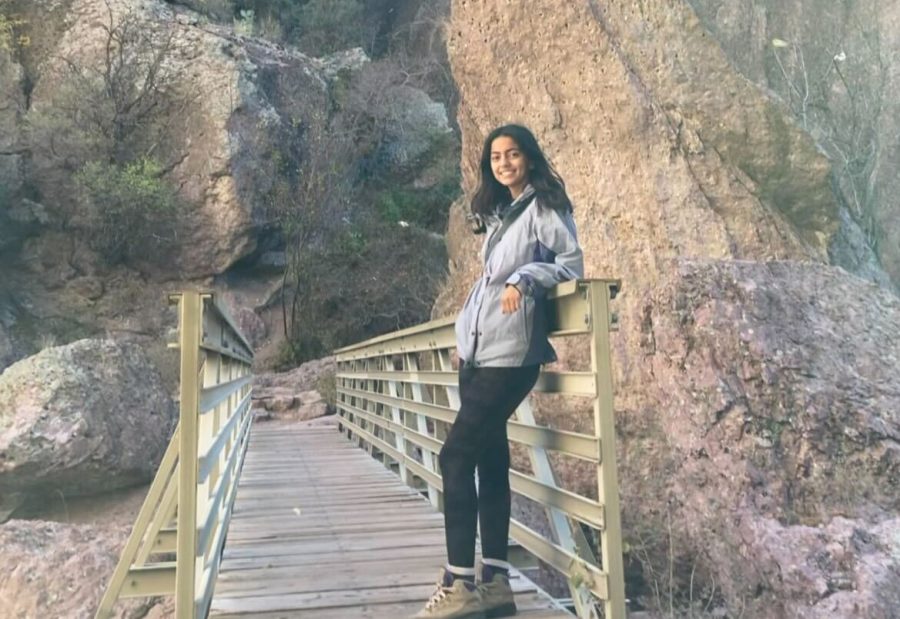 There are many places in El Paso to rock climb that are both indoors and outdoors. Photo courtesy of Alyson Rodriguez

Known throughout the world for its incredible rock formations, El Paso is a destination for elite rock climbers.

I think rock climbing is a great and fun way to exercise. I believe that it is a better way to work out than going on a run or lifting weights. I started rock climbing when I was in fourth grade. I first found out about it from my best friend at the time whose parents were professional rock climbers.

It all started when my best friend’s birthday party was held at Hueco Tanks State Park. When I arrived, the adults made sure we put on safety belts and helmets before we were hoisted up into the air with a rope. At first, I felt like a piñata and had no idea what to do while I was hanging in the air. But then I got my footing and grabbed onto the side of the mountain that towered before me. I gathered all the strength in my small body and climbed all the way to the top. I guess my friend’s parents saw potential in me and began to invite me to go rock climbing with them after that. But the time after that was very different.

The next time I went with them, there were no ropes, harnesses, or helmets. There was only a large mountain and a small mat at the bottom that stood before me. I was a little scared at first, but the adults coached me the whole way. Over time, I built the confidence to overcome any boulder or mountain that came my way, both literally and figuratively. I have learned a lot of valuable skills through rock climbing, and I believe others who try it can, too. Such skills include how to persevere in every challenge faced and how to climb boulders without a rope.

The sport of rock climbing first began out of the long tradition of mountaineering. It was created when mountaineers needed to climb technical areas of rock in order to reach the summit. This led to mountaineers practicing technical climbing in more accessible areas. It is said to have started during the times of Mayan and Incan civilization. The first rock climbing competition was held in Europe in the 1800s and the sport has grown exponentially since.

In El Paso there are many spots in the Franklin Mountains to go rock climbing. Equipment such as harnesses, helmets, ropes, powder and other things will keep you safe. Rock climbing outdoors is not for the faint of heart and can potentially be dangerous. Rock climbing is allowed during the park’s hours and if you are a beginner, you may contact the park rangers on site for assistance.

If you are not ready to venture out into the great outdoors and you are a UTEP student, then the indoor rock-climbing wall at the UTEP rec center is the place for you.  Students can climb on the 1561 square feet climbing gym, which includes two bouldering walls. The walls are 39 feet high, and it is for both intermediate and advanced climbers. The hours of operation are 5 p.m.-8 p.m., Mondays, 2 p.m.-8 p.m., Tuesday-Friday and 1 p.m.-4 p.m., Saturdays. The rec center also offers classes.

For more information on rock climbing at the UTEP rec center visit www.utep.edu/student-affairs/rsd.