Playing in style in and out of the game 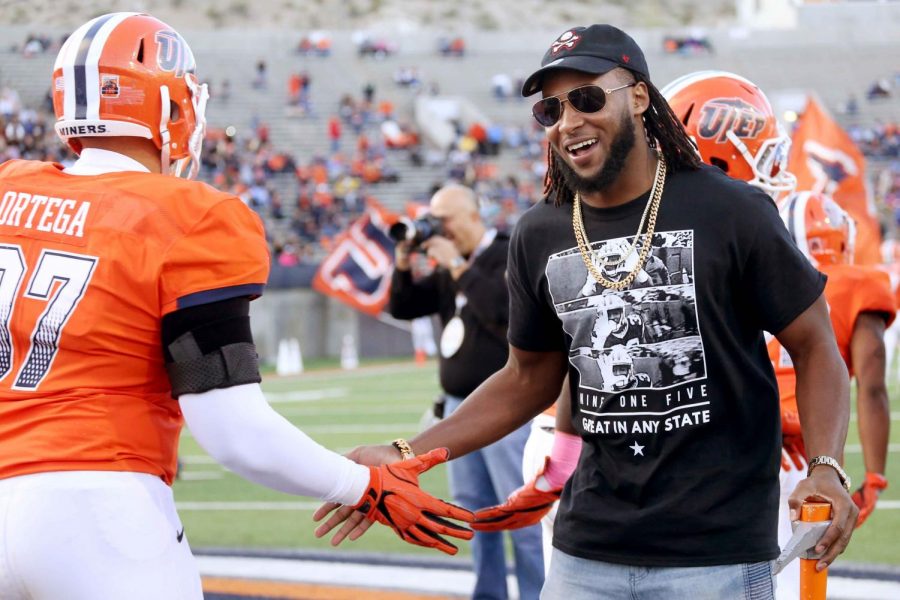 UTEP alumnus and current running back for the Green Bay Packers Aaron Jones visiting his hometown during a UTEP football game.

Athletes have plenty of rituals to help get them in the zone, but before the game even starts, athletes will take advantage of being in the spotlight and dress to impress.

Being able to express themselves through their fashion choices is an opportunity these athletes don’t take lightly – especially with the resources at their fingertips.

National Football League Cincinnati Bengals quarterback Joe Burrow was one of the most talked-about athletes of the season, not only because of the records he was breaking, but because of the outfits he would show up in.

Burrow did a variety of things like show up to the Super Bowl in a zebra print suit, and showed up to the AFC championship game with a customized “JB9” diamond necklace made to wear. The significance of the necklace is those are his initials and the number he sports while playing football.

A famous player who is UTEP alumnus and Burges High School graduate is Green Bay Packers running back Aaron Jones. Jones often pays homage to his hometown city of El Paso in his outfit choices. Jones on numerous occasions made sure to add a sombrero to his outfit out of respect and love for his hometown.

Something also of significance that Jones adds to his uniform is a necklace filled with his dad’s ashes. His dad passed away from COVID-19 complications in 2021, but Jones wanted to ensure his father was always with him.

National Basketball Association star Lebron James is known not only for being the leader in many categories across the NBA but also for the choices he makes when it comes to an outfit. His style has a wide variety considering he will dress in a hoodie and jeans, then the following game he is in nothing but designer clothes.

National Hockey League player David Pastrňák plays right wing for the Boston Bruins. Pastrňák takes advantage of his opportunity to wear whatever he pleases by wearing customized suits prior to games. Pastrňák has worn all kinds of suits that consist of solid colors like mint green or salmon, to suits covered in prints like penguins or bubblegum.

Major League Baseball player Fernando Tatis Jr. created a spark in the MLB world when he showed up to the All-Star game in a custom pink suit with “El Niño” and 23, his number, engraved on the inside of his suit. Tatis Jr. is a short stop and outfielder who plays with the San Diego Padres.

While sports are most of these athletes’ first love, there is room for more than just the sport. Athletes across every sport are constantly putting time and effort into their outfit choices to ensure they have style not only when playing, but also when arriving to the game.

Emily Autumn Velasquez is the sports editor and may be reached at [email protected]; @emilyautumn20 on Twitter.