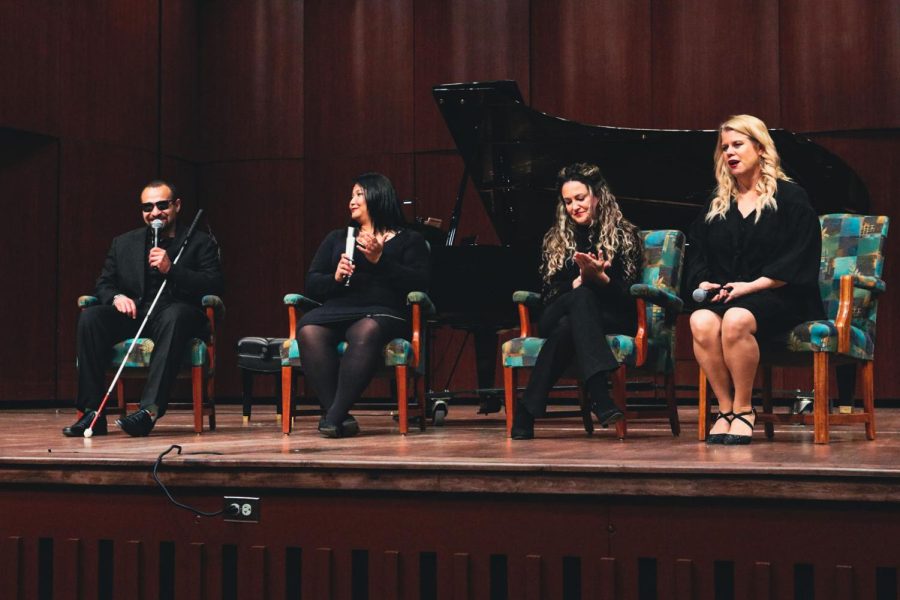 The recital focused on  world-famous Spanish composer and pianist Joaquín Rodrigo, who became blind around the age of 3 after contracting diphtheria.

The recital program included a methodology lecture based on Rodrigo’s life, an on-stage narration performed by Annie Pennies and Lawrence Brown, a small section in which audience members could choose to put on blindfolds to experience blindness, and moving piano performances by Jones partnered with vocal performances by soprano Cristina Jones.

Jones knew that she wanted to play the piano for the rest of her life at a young age. After stumbling upon an organ at her grandmother’s house when she was around three  years old, she quickly became entranced by the instrument and its notes.

“My grandmother on my father’s side, I think she had this little organ in her house, and when I was like 3 or 4, I stumbled across this thing nobody had played in forever,” Jones said. “I started to play [children’s songs] like ‘Twinkle Twinkle, Little Star,’ and so when my parents saw that, they were like OK, we need to get this girl piano lessons.”

Jones’s love for Spanish culture came a little later in her life as a teenager. The high school she attended only taught Spanish as a foreign language, which she had to take in order to attend college.

After taking the classes, she immediately fell in love with the language. However, after arriving at college and deciding to pursue music  as a degree, she believed she had made the wrong choice.

“[When] I went away to college, I thought I had studied the wrong language because in music study, students studied French, German, and Italian. Those are the main foreign languages,” said Jones. “Spanish was not up there at the time when I was in college, so when I found this nationalist music [from historical Spanish] composers, I was able to combine my love for music with my love [for] Spanish.”

Following Jones’ love for music and pursuit of music came her admiration for Joaquín Rodrigo, whom she studied upon the recommendation of her last piano teacher in graduate school.

“I’ve been studying this music for 22 years, and his music still inspires and motivates me even though I played a lot of these pieces on this program,” Jones said. “Some of them are new, and some of them have been playing for a long time, but I always learn new things. I think it’s because of [my] love [for] Spanish culture and the language and this unique way that this composer wrote music, his musical language that he uses. I know it’s just something really special and amazing to me that I’ve been fortunate enough to connect with this man and his music.”

“Vision Through Sounds” is meant to open people’s eyes to the blind community and inspire others to have a sense of empathy for the blind.

Jones’s inspiration for the program came from the life of Rodrigo and the amazing music he managed to make despite lacking sight. Through his biography, Jones has managed to connect to other wonderful performers who also wish to bring more attention to the blind.

Rodrigo’s legacy on the blind and music communities has made its way to El Paso through this wonderful program, and will hopefully be introduced at a full scale in the near future.

“I always hope that somebody feels inspired. I think the number one goal for all of my performances or all of my lectures is that people feel inspired to do better or [to make a] change, so it’s sort of an activist role with playing music,” said Jones. “There’s so many more important and interesting things about [Joaquín Rodrigo] than his blindness, but this research has led me to ponder what it is like to be blind, and so I think the [goal] for this recital is to have people leaving with more compassion for the blind community.”