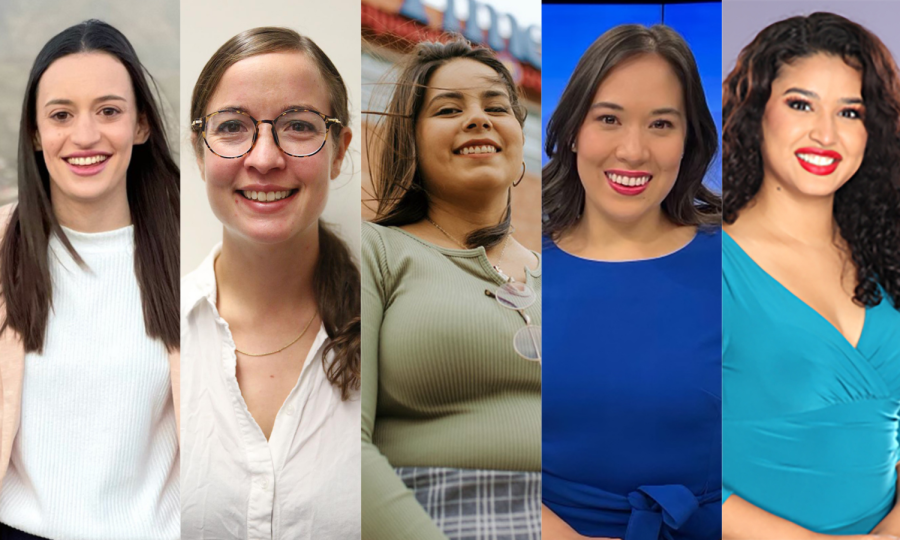 From left to right, Rachel Phillips, reporter and anchor for KVIA Channel-7; Martha Pskowski, environmental reporter at the El Paso Times; Gabriela Velasquez, photojournalist at the El Paso Times; Brianna Chavez, reporter, anchor, and producer at KVIA-TV; and Vania Castillo, CBS and KFOX reporter and weather forecaster speaks on the challenges in the industry. Courtesy of Phillips, Pskowski, Velasquez, Chavez, and Castillo.

Women have graced the world of journalism with intellectually written news pieces, beautiful photography, and stunning production in broadcast, though one might not think about the amazing journalists here in the borderland. Rachel Phillips, Brianna Chavez, Vania Castillo, Gabriela Velasquez, and Martha Pskowski are a few women journalists who cover the city of El Paso through multiple media.

However, the journey to get to where they stand now was not a simple task.

Becoming a journalist in any medium is difficult, but as women, problems tend to begin with self-confidence and mental blocks. For KVIA Channel 7 reporter and anchor Brianna Chavez, it is a problem she has faced then and even now.

Chavez, who at times can be reporting in front of thousands on live television, has dealt with the high pressures of tight deadlines and competitiveness in the newsroom, which at times can create the uncertainty in herself.

“It’s just a matter of believing in your abilities and just being a little kinder. If you mess up it’s okay.” Chavez said. “It’s finding little ways to learn from your ‘mistakes’ or learn from the things you’ve done and taking that and giving yourself a little more compassion and moving on.”

Along with Brianna, CBS and KFOX reporter and weather forecaster Vania Castillo says she can sometimes find herself in the same predicament.

“Go for what you want. I think a lot of the times, especially as Hispanics, we tend to play down our achievements,” Castillo said. “I think it’s important to acknowledge where you’re at and how far you’ve come and all the work that has gone into that.”

Aside from the mental blocks someone might face, it can be a challenge when wanting to prove yourself as a woman to others, not only in the newsroom but in public.

For Vania, it can sometimes be a dangerous situation. Harassments, assaults and bullying towards women journalists both online and in-person are on the rise, according to a report done by the International Women’s Media Foundation. It is something that happens often in this field of work and something Vania has dealt with first-hand. “I think there’s always challenges when working in journalism especially (as a woman journalist), there’s like extra precautions you have to take when you’re out on the field,” Castillo said. “I’ve been grabbed. I’ve been harassed and stuff like that.”

Even with harassment being yet another problem women face in this field of work; at times, the biggest problem can be others not believing and supporting you and your journey.

For reporter and anchor for KVIA Channel-7 Rachel Phillips, being second guessed by others in newsrooms is something women constantly face. Phillips, who wants to join the sports journalism world has seen and heard the sexist comments made towards women reporting on sports.

Phillips said there is a lot of adversity for female journalists, and she works to educate men that women can report on sports and other topics just as well as men.

As negativity can surround newsrooms and areas of work, it’s important to have other women support you especially when faced with hardships. For Phillips, her former co-worker and founder of “Mija, Yes You Can,” Iris Lopez, has been a great support system since day one.

“I think we’re lucky at Channel 7 with someone like Iris Lopez,” Phillips said. “She started (supporting women) because she didn’t have that when she started, and she wanted to make sure that other women had that.”

Though support from fellow women in the same field is key to a better environment, and the support from men who dominate those areas of work can be critical to having a healthier workplace.

For photojournalist at the El Paso Times, Gabriela Velasquez, the support came straight from the men photographers who dominate sports photography here locally.

“My friends, they call themselves ‘Los Photogs,’; (a group of male photographers across different newspapers in El Paso), they’ve been really supportive,” Velasquez said. “Since the first day that I met them, they would give me tips, and even now even when I wasn’t at The Prospector, they were just always super supportive.”

With journalism constantly evolving, supporting women in journalism helps tell stories from different angles and allows for pieces to go beyond what we have imagined. For Martha Pskowski, an environmental reporter at the El Paso Times, the challenge can be knowing what you what you want to write about and how you decide to tell those stories.

“Because the journalism industry is changing so rapidly it can be really hard to know where to put your energy or what medium is growing or shrinking,” Pskowski said. “Being able to make smart choices about what outlets to work with is just hard. The industry is like in upheaval all the time.”

For all these women, there has always been a challenge and the challenges will not stop there, from deadlines to harassment, these women have pushed themselves to be better and overcome adversity. They encourage all women studying journalism or wanting to enter the field to believe in who they are and not be afraid to ask questions.