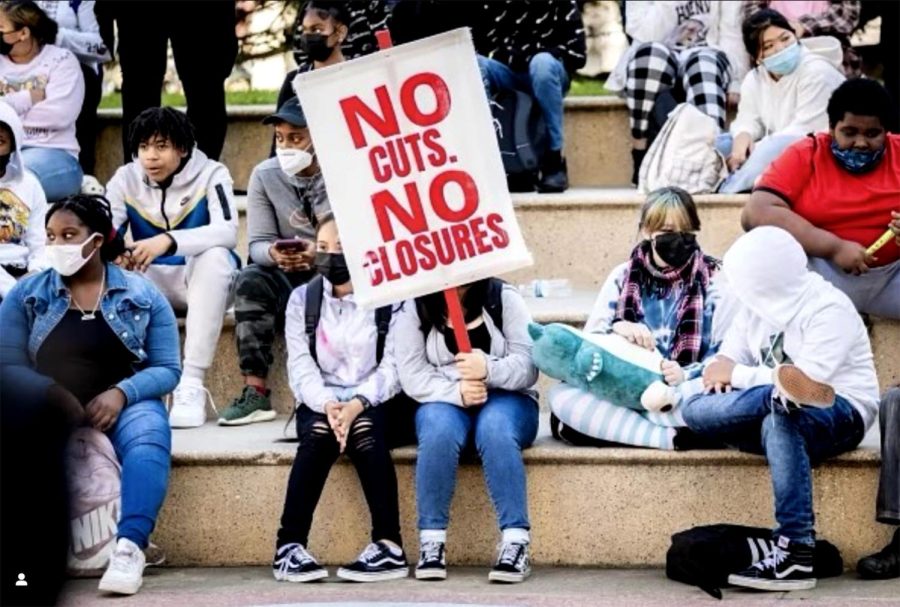 Students, parents, and teachers at Oakland Unified School District created a hunger strike due to the sudden announcement of the closure of eleven schools in their district that are predominantly Black and Latinx communities. Photo courtesy of hungerstrike4oaklandschools Instagram.

Editors note Feb. 21, 2022 12:34 p.m- As of Feb. 20 the hunger strike has ended after medical professionals advised for the well being of the individuals involved to stop. Maurice André San-Chez has provided a statement on the instagram account @hungerstrike4oaklandschools stating ” On day 20 I’m ending my hunger strike. Two days after we were forced to end. The district does not control me or my body. Time to recover and gain strength to continue this battle. Thanks for your love and support…” The information is updated to reflect the current information given to The Prospector.

Eleven schools in the Oakland Unified School District are set to close at the end of the California academic school year May 25. However, it is a motion that had no community input and was voted on solely by certain school board members. The schools in question range from elementary, middle, and intermediate (K-8) schools that are in predominantly Black and Latinx communities.

The sudden announcement of closures sparked debate amongst the community, students, parents, and teachers and created a hunger strike by teacher and UTEP alumni Maurice André San-Chez. Camped outside of their workplace Westlake Middle School, San-Chez went on strike at the beginning of February, in hopes of halting the vote that took place Feb. 8 which would determine what schools would be closed, merged, or reduced to certain grade levels.

“I think they tried to base it off (the school closures) of test scores and like certain logistics and they’ve also been saying enrollment is low,” said San-Chez. “They were going to close the schools at the end of this year with no community input.”

The board meeting resulted with the initial proposal that started with 16 schools; including Westlake Middle school, to be finalized with 11 schools to be affected. One of those schools taken off the list was Westlake, in hopes that the hunger strike would end.

“It’s a small win for us, but we’re in this so no school has to close.” said San-Chez. “People have asked if we’re going to stop anytime soon but it’s not going to happen until our demands are met.”

They are currently on the second week of their hunger strike; as of Feb. 14, they continue to hope for more of their demands to be met such as, meeting with the other board members and the governor so that these schools affected are not closed.

“We’re meeting with the superintendent today (Feb. 14) and we have some other teachers from other schools that are ready and willing to join in our fight,” San-Chez said.

District 5 Director of OUSD Mike Hutchinson has also voiced his concern over the closures and tried to act against the closures of these schools.

Hutchinson has been a part of the Oakland School district for more than 20 years according to his biography on the school district website. His dedication to public education and the Oakland community is the reason for his support for these schools not to close and for community input on the decision.

“I’m really disappointed and on a personal level I’m furious that y’all would choose to do this to the community when you know there is no justification,” Hutchinson said at the meeting “You see the community’s response. You know we cannot afford to not make any of these changes so how dare you inflict this on my community? So, you have a choice, and everyone is going to hold you accountable for those choices.”

The school district has not made any further strides to shorten the list even further or possibly eliminate the list entirely. The Prospector did reach out to the Superintendent of OUSD with no response as of Feb.14. More about the hunger strike can be found on Instagram @hungerstrike4oaklandschools along with information on how to support and help the cause.