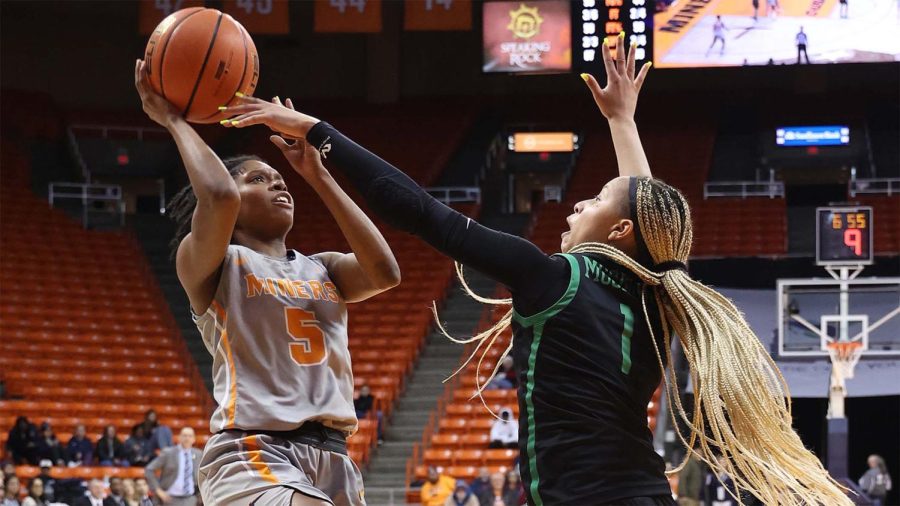 At around six minutes into the game, the Miners came out hot with a 9-0 run then followed later with an 8-0 run to respond to a 5-0 run by North Texas, making the score 17-5.

In the second quarter it was all North Texas as junior point guard Jazion Jackson finished with a team-high 10 points, two assists and a rebound. With a layup by graduate student Emma Villas-Gomis, North Texas trailed 35-27 with 1:12 before the half.

UTEP immediately answered back with back-to-back threes by junior guard Destiny Thurman and a half-court shot by sophomore guard Avery Crouse before the half.

“If you came to the game, you saw a great performance, and I am proud of that,” Head Coach Kevin Baker said in a post-game interview with UTEP Athletics. “Where we really won this game was Monday, Tuesday and Wednesday. Our players came back and had awesome and upbeat practices after playing horribly on Thursday and Saturday in Florida. They were kind of at a crossroads, and this team decided that they weren’t having it, and Monday, Tuesday and Wednesday were great practices. That is where we won the game.”

For the Miners, Thurman had a huge night scoring a career-high of 30 points against the Mean Green. Thurman recorded 15 points in both the first and second half, scoring 9-of-17 from the field, 4-of-7 from beyond the 3-point line and 8-of-9 from the free throw line. Thurman became the first Miner to reach 30– points since Sparkle Taylor scored 32 points against Old Dominion.

“I hope now finally that Destiny Thurman gets the respect that she deserves in our conference,” Baker said in a post-game interview with UTEP Athletics. “She has been looked over and she’s been passed by. She is probably our best defensive player, and tonight, she was our best everything.”

Also leading for the Miners was freshman forward Erin Arike with eight rebounds, Crouse with 14 points and Wilson who recorded a season-high of 15 points and two steals. The Miners also recorded the best 3-point field goal percentage (54.5), making it the best total of the season.

UTEP can be seen back in action as they host Rice University at 1 p.m. Saturday, Feb. 5 at the Don Haskins Center

All stats for UNT courtesy of UNT Athletics, meangreensports.com

All stats and quotes for UTEP courtesy of UTEP Athletics, utepminers.com