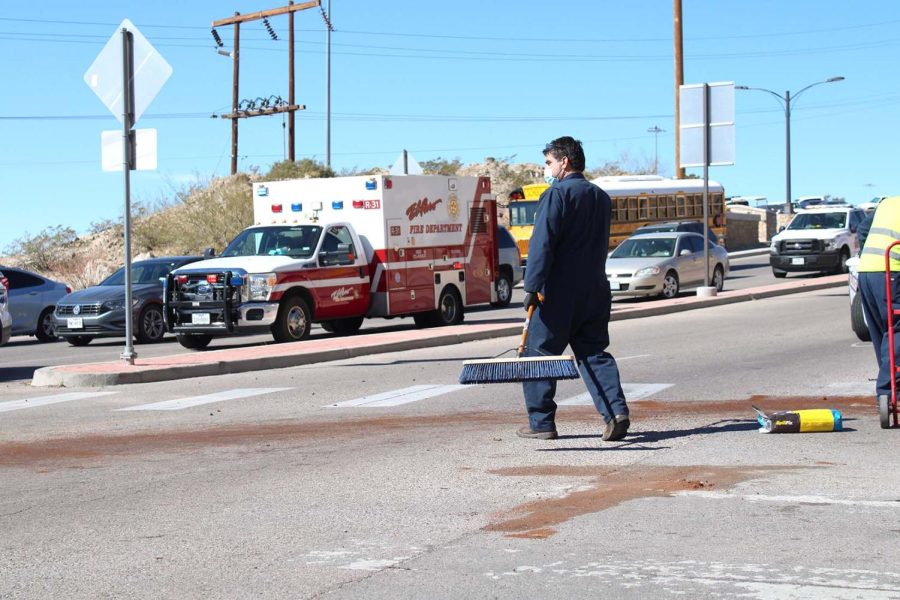 On Monday Jan. 31 UTEP police responded to an accident outside Sunbowl garage after a driver reportedly hit a pedestrian.

Editor’s Note 3:31 p.m.- This story was updated to include information released by UTEP police department.

Car collides with UTEP golf cart after inital reports of a pedestrian being struck by a driver near UTEP Sun Bowl parking garage Monday morning.

The front of a gray Honda Civic appeared to be smashed in, as paramedics assisted the driver. Outside of the car, a pedestrian was seen lying on the ground as he received aid from first responders.

The Prospector contacted campus police and released a statement saying: “A minor accident involving a UTEP golf cart and a vehicle on Sun Bowl Drive on Monday. one person was transported to a local hospital with minor injuries as a precaution. No pedestrians were hit.”

The driver, who appeared to be a young woman, was put into a stretcher, and given aid. Eyewitnesses described her as agitated.

According to UTEP Police speed limit on campus is 15 mph, and 5mph in all parking lots.

The Prospector will continue to provide updates as the story develops.

Itzel Giron is the Audience & Engagement editor and may be reached at [email protected]; @by.itzel.giron on Instagram; @itzel_anahi_16 on Twitter.