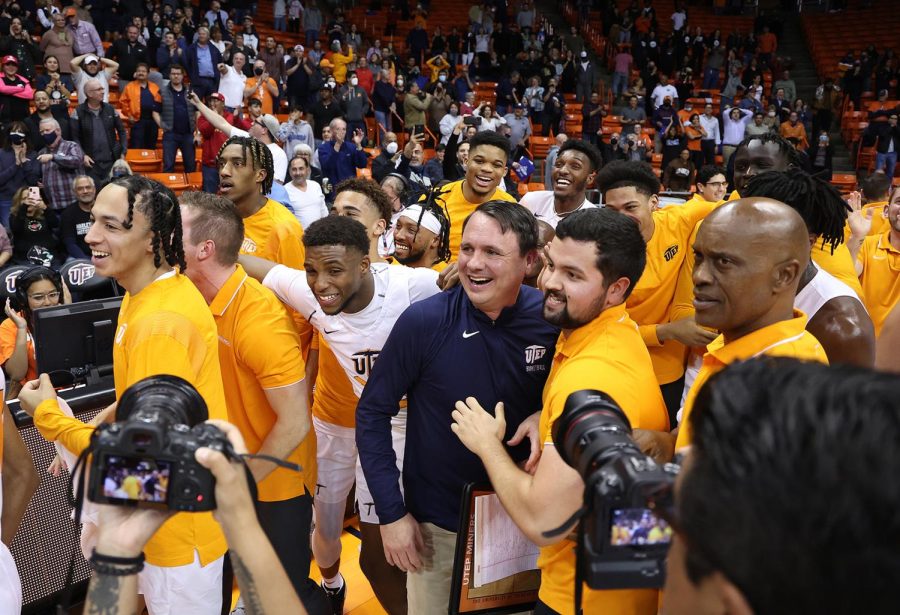 The UTEP Miners men’s basketball team (12-8, 5-3 Conference –USA) got  a win at the last second on tip in against Florida Atlantic University (11-9, 4-3 C-USA) on Jan. 27 at the Don Haskins Center. The Miners played well on offense, and also played good defense against the Owls to get a 70-68 victory.

“First off credit to Florida Atlantic, that’s a really good team,” UTEP Head Coach Joe Golding said. “I thought it was a great college basketball game. We fought a ton of adversity with (Jamari) Sibley going out in the first minute. Credit to our guys, they continue to fight and handle adversity. I’m proud of them.”

“To see Alfred (Hollins) with a second-effort play to win the game, I’m just proud of him,” Golding said. “He’s playing really well down the stretch.”

In the beginning of the first half, the Miners  took a 7-3 lead after a couple of buckets made. Later on, UTEP took an 11-3 after a lay-up from junior forward Tydus Verhoeven.

Later on, junior guard Jamal Bieniemy, pushed the Miners lead to 16-7 after a made basket.  Moments later, Bieniemy scored again to push the lead to 23-12 with a 3-pointer.

Junior guard Souley Boum, at the buzzer, drained a 3-pointer to cut the Owl’s lead down to 36-38.

In the start of the second half,  the Miners pushed their lead to 40-38 after made baskets from Boum and Bieniemy.

The Owls once again went on a scoring run to tie the game at 44. Verhoeven got back-to-back baskets to drop to put the Miners up 48-44.

At the 3:52 mark, the Miners were trailing 64-66 after a scoring run from the Owls. But, Verhoeven was able to tie the game at 66 points with a hook shot.

In the final 30 seconds, FAU attempted a last minute go ahead bucket, but the Miners defense would stand tall.  Bieniemy unfortunately  missed the game winning 3-pointer with 10 seconds left, but senior forward Alfred Hollins was able to tip-in the missed 3-pointer to win the game.

The Miners shot 47% from the 3-point line , and 53% from the field goal. Defensively, the Miners forced 15 turnovers, and also grabbed nine steals in this thrilling contest.

The UTEP men’s basketball team can be seen back in action in their next game against Florida International University  at 7 p.m. on Jan. 29 at the Don Haskins Center.