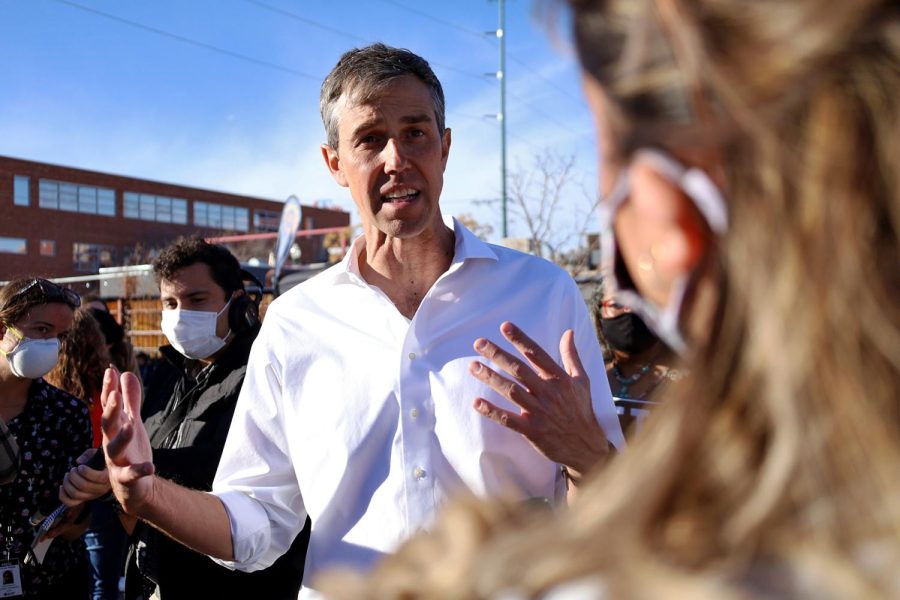 Beto O’Rourke speaks to attendees about his stance on women’s rights, weapons, school funding and his campaign for Governor.

Beto O’Rourke returned to El Paso Saturday Jan. 8 in hopes of getting support from his hometown as he prepares to face Republican incumbent Greg Abbott in the race for Texas Governor.

Hundreds of masked individuals filled the empty parking lot of Dead Beach Brewery as O’Rourke prepared to speak on key points of his gubernatorial campaign. From legalization of marijuana to keeping the electric grid up and running that failed last year, leaving many Texans stuck in freezing temperatures.

For San Antonio resident Patrick Chacon, O’Rourke must speak up on things that are not only important to him but to others across Texas.

“For me Beto really needs to make points on climate change, the healthcare crisis and how he plans on protecting Texas if the electric grid somehow fails again.” said Chacon. “I suffered tremendously during that winter storm; I hope if Beto is elected that I don’t have to worry about being in that situation again.”

O’Rourke has faced much uncertainty after losing the Senate race back in 2018 to most recently dropping out of the 2020 Presidential run in 2019. Even with that strain on popularity and trust, O’Rourke has once again stepped up to the plate and run against yet another Texas favorite Republican.

However, back in 2018 O’Rourke was favored to win by many young voters and celebrities across the country. On election day record numbers of voters headed to the polls which created one of the closest senate races in Texas since 1978. A marginal loss of about 215,000 votes, O’Rourke was able give Incumbent Ted Cruz a good scare.

With that loss, O’Rourke has still been able to gather support from across all ages; from 14 to 90 years old. Those supporters include 15-year-old Allison Gaumer, a freshman at Coronado High School who, even not having the chance to vote this year, still finds herself advocating for O’Rourke.

“Something about Beto just gets me excited for what he can do for Texas.” said Gaumer. “Even though I’m young and do not have a voice in voting just yet, I really hope he can advocate for all of the young people who support him but can’t vote for him yet.”

For about an hour O’Rourke spoke to the crowd in hopes many would feel inspired to not only vote for him on election day but support him by getting others to believe in his ideas for the State of Texas.

Finishing his speech, O’Rourke took time to take pictures with all attendees and spoke to anyone who had questions about his goals as governor. Being his first big event in El Paso, O’Rourke hopes he can get his message across to those of his hometown and to those across the state.

I asked him how he hopes to bring more young adults to the polls and quite possibly allow him to take the win and become Texas Governor unlike his Senate bid.

“It was actually those students at UTEP that got us that close [during the Senate Race]. Young people turned out at a rate that was 500% greater in 2018 than the previous midterms.” O’Rourke said. “All those UTEP and community college students and young people who don’t go to college but are enlisted or maybe working a job turned out in record numbers in 2018. It got us within a little more of 2% of the sitting U.S. Senator. I’m very confident that if we continue to see that leadership from young people, we are going to win this race.”