Miners Bounce Back in Win Against Golden Eagles 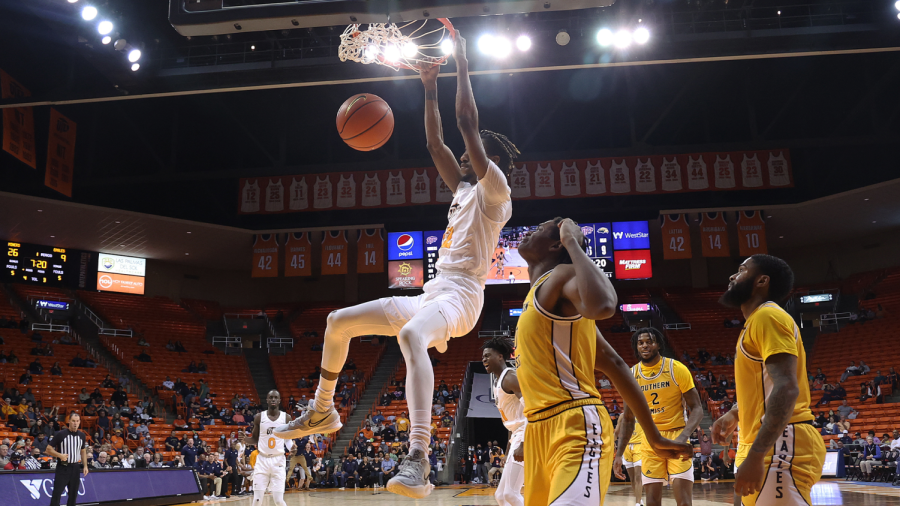 The UTEP men’s basketball team (8-7, 1-2 Conference–USA) collected their first conference win against the University of Southern Mississippi (5-9, 1-1 Conference-USA) on Jan. 8 at the Don Haskins Center. The Miners offense played as a unit, and were able to force 14 turn overs in this 87-54 victory over the Golden Eagles.

“I’m proud of our group, we bounced back (from Thursday) and they deserved it,” said UTEP head coach Joe Golding. “Our ball movement is getting better, and tonight we saw some shots go in early and that gave us some confidence. We were very efficient on the offensive end, and I’m just proud of our guys.”

In the start of the first half, the Miners took a 15-1 lead with multiple buckets being scored and played tough defense.

Freshman guard Jorell Saterfield,  made his presence felt, by hitting a jumper to put the Miners up 19-5.

Southern Miss would make a small run to cut down the score to 21-9.  However, junior guard  Jamal Bieniemy splashed a 3-pointer to put the Miners up 24-9.

Later on in this game the Miners took a 31-9 lead after a 3-pointer from freshman forward Jamari Sibley.

At the 1:44 mark, the Miners went on a scoring run to increase the lead to 38-17 after a bucket from junior guard Souley Boum. Boum would hit a 3-pointer to extend the lead 41-19.

At the half, the Miners led 44-23 making this the Miners highest scoring first half against a DI opponent this season

The Miners would get more buckets to drop and go up 56-31 after a slam dunk from freshman forward  Ze’ rik Onyema. Moments later, redshirt junior guard Emmanuel White, drained a 3-pointer to put the Miners up 65-37.

The Miners go on to win a bounce back game 87-54. This 33-point victory is the biggest against a DI opponent this season,

UTEP would finish this game with 15 made 3-pointers which would be a season high and tie the school record.

The UTEP men’s basketball team can be seen back in action in their next game against the University of North Carolina at Charlotte  at 5 p.m. at the Dale Halton Arena on Jan. 13.