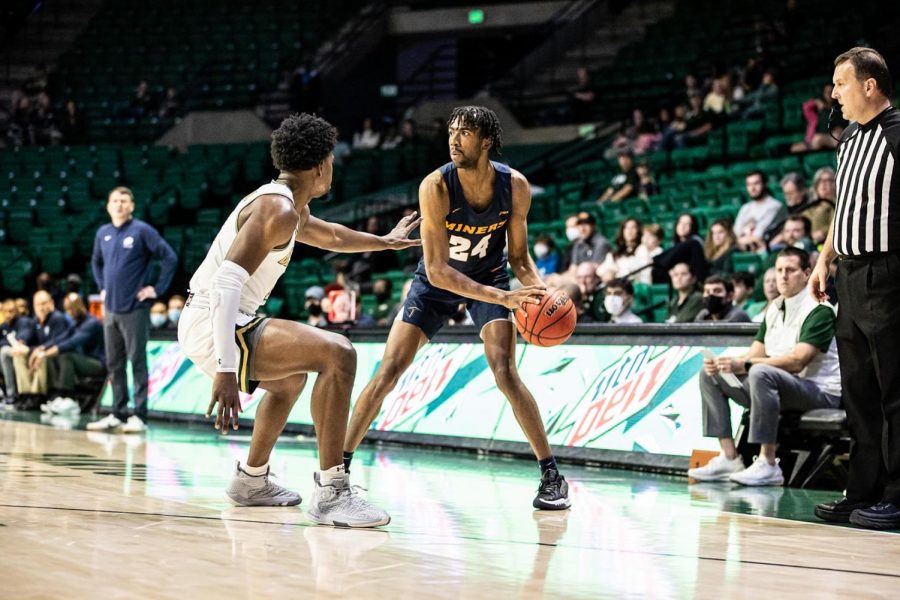 Jamal Bieniemy looks down the court for an open teammate against UAB on Dec. 30, 2021. Photo by: Ken Shepherd.

The UTEP Miners (7-6, 0-1Conference USA) lost their first conference game to the University of Alabama at Birmingham (11-3, 1-0 C-USA) on Dec. 30 at the Bartow Arena in Birmingham, Alabama. The Miners could not find their footing offensively and struggled on defense in this matchup.

“They are just explosive at all five spots and I think they (UAB) are an NCAA Tournament team,” UTEP associate head coach Jeremy Cox said. “We guarded and were there a few times, but they hit some tough and contested shots. These things can get out of hand in a hurry and to keep it respectful throughout says a lot (about our guys).”

In the start of the first half, UAB took a 5-0 lead. However, the Miners tied the game 5-5 after a 3-pointer  from junior point guard Jamal Bieniemy.

Freshman guard Jorrell Saterfield cut down the lead to 29-14, however, senior guard Michael Ertel for the Blazers sank a 3-pointer to put them up 32-14.

The Miners struggled to get a consistent offense going in this contest with the Blazers. UAB took advantage of the struggling offense from UTEP, and pushed their lead to 40-23 late in the first half.

UTEP scored a couple of more baskets before the end of the first half to cut the lead down to 42-28.

Saterfield led the way in scoring 11 points in the first half , followed with Bieniemy scoring eight points, and grabbing two rebounds. UTEP as a team would shoot 34% from the field , and 46% from the 3-point line.

In the start of the second half, both teams came out scoreless for the first couple of minutes. Then, UAB ballooned their lead to 55-37 at the 13:57 mark.

The Miners wouldn’t go down so easily as they cut down the Blazers lead to 55-43. Unfortunately, UAB went on a scoring run, blowing the doors open. The Miners would go down by 22 before going on a 9-0 run to put the score at 75-62. But that would be the most they could do as time would expire.

UTEP would lose this match up with a final score of 75-62.

The UTEP men’s basketball team can be seen back in action in their next game against Louisiana Tech University at 8 p.m. at the Don Haskins Center on Jan. 8.