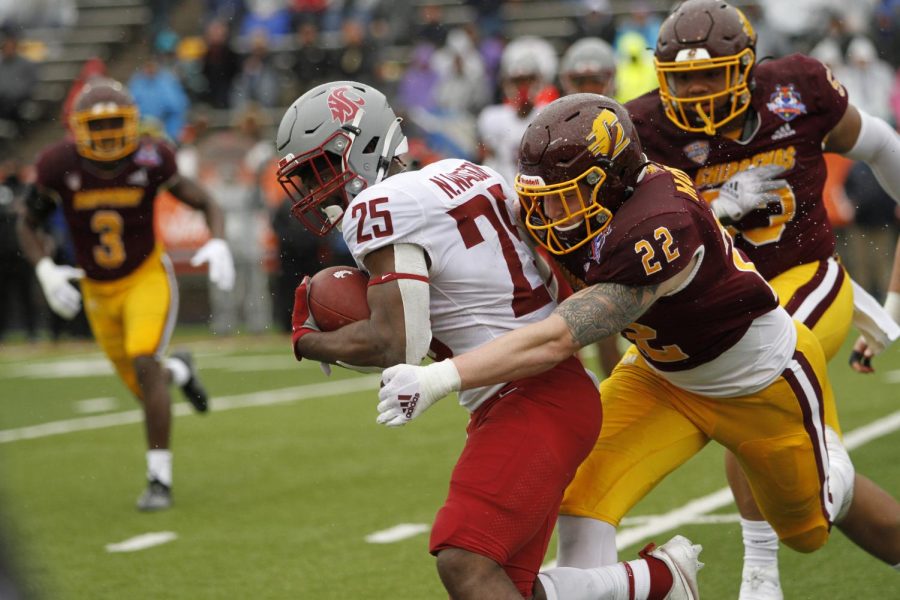 Wide receiver Kalil Pimpleton catches a pass against Washington State at the Tony the Tiger Sun Bowl on Dec. 31, 2021.

The 88th annual Tony the Tiger Sun Bowl took place on Friday Dec. 31 at 10 a.m. in El Paso, Texas where the Central Michigan Chippewas (9-4) took on the Washington State Cougars (7-6) where Central Michigan came out victorious with a final score of 24-21.

The Cougars were originally set to face off against the University of Miami, but it was announced on Dec. 26 they were unable to compete due to COVID-19 protocols. Immediately the Sun Bowl association was on the hunt for a replacement team.

The Chippewas were originally set to face Boise State in the Barstool Arizona Bowl, but Boise State announced on Dec. 27 they were also unable to compete in their bowl game due to COVID-19 protocols.

After Boise State dropped out the Chippewas were the perfect replacement team for Washington State. The Barstool Arizona Bowl was the fourth bowl game to be affected by COVID-19 in 2021.

It was a long first half for the Cougars as they struggled to gain rhythm offensively only managing to accumulate 53 yards offensively.

The Chippewas were first to get on the board after a 49-yard field goal was made by freshman kicker Marshall Meeder. This field goal was set up after a 38-yard run from redshirt freshman running back Lew Nichols III on the first play of the drive.

This Chippewas went up 6-0 after another successful field goal from Meeder, this time from 52 yards out.

The forced fumble set the Chippewas with a short field where they managed to finally punch in a touchdown after a one-yard rush from Nichols III to put Central Michigan up 13-0.

After a 45-yard punt return from junior wide receiver Kalil Pimpleton, the drive for Central Michigan began on the WSU 9-yard line.

After a 15-yard touchdown pass from redshirt freshman quarterback Daniel Richardson to sophomore tight end Joel Wilson, the Chippewas went into halftime with a score of 21-0 over the Cougars.

Washington State finally managed to get on the board after redshirt senior wide receiver took a direct snap to run up the middle for five yards and get the Cougars on the board. The Cougars were trailing the Chippewas 7-21.

The Cougars next drive began on CMU’s 23-yard line after Richardson’s pass was intercepted by WSU junior linebacker Travion Brown. After a 5-yard touchdown pass from sophomore quarterback Victor Gabalis to freshman wide receiver De’Zhaun Stribling, the Cougars were back to being within one score of the Chippewas with the score being 14-21.

Central Michigan knew they needed to put something on the board to make it a two-possession game as they were in the fourth quarter. After a turnover on downs from the Cougars, CMU’s Meeder was able to get a field goal on the board from 43 yards out and make the score 24-14.

Washington State managed to get on the board one more time after a 13-yard touchdown pass from Gabalis to junior wide receiver Lincoln Victor. This made the score 24-21 and the Cougars were within one score of the Chippewas again.

Central Michigan went three and out on their next drive, giving the Cougars one more chance to either tie or win the game.

Unfortunately, the Cougars couldn’t find the rhythm they needed to drive the ball downfield and gave the ball back to CMU after turning the ball over on downs. Central Michigan then entered victory formation and won the game with a final score of 24-21.

Nichols III led the team with 120 yards rushing and one touchdown and Meeder managed to help lead the team to victory after making three field goals.

This was Central Michigan’s first bowl victory since 2012 which ended their 5-game bowl losing streak. This was the Chippewas first win over a Power 5 opponent since their win over Oklahoma State in 2017.

“We don’t get an opportunity to play Power 5 teams very often and to get a win, especially in a bowl game as historic as this one, I’m just really proud of our guys,” CMU head coach Jim McElwain said.

This was also their first bowl victory over a Power 5 opponent for the Mid-American Conference team as they were seven-point underdogs prior to the matchup.

This was Washington State’s third appearance in the Sun Bowl and their first time losing there as they were 2-0 after beating Purdue in 2001 and Miami in 2015.

Stats and quotes acquired with the help of Central Michigan Athletics and Washington State Athletics.