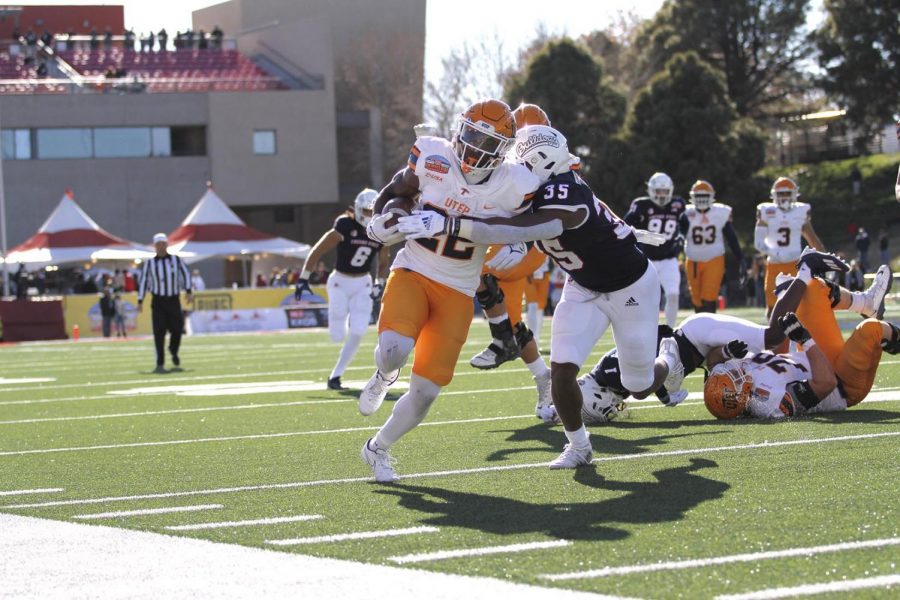 Running back Ronnald Awatt runs down the field against Fresno State on Dec. 18,2021, at University Field

The UTEP Miners were defeated by the Fresno State Bulldogs in the 2021 New Mexico bowl game on Saturday, Dec. 18 at the University of New Mexico stadium with a score of 24-31.

The Miners won the toss but elected to defer, putting the defense straight to work. The Bulldogs got off to a fast start when Fresno state senior quarterback Jake Haener handed the ball to senior running back Jordan Mims for a 38-yard run.

Due to a pass interference call on the Miners, Fresno state was able to score a touchdown with 12:44 left in the first quarter. Fresno state elected to go for two to extend their lead, but due to a penalty for an illegal formation on the Bulldogs, it forced them to settle for the extra point, which they then missed.

At the start of their possession the Miners got off to a fast start as well, determined to respond to the Fresno state touchdown. The Miners offense was able to complete three first downs which brought them close to the end zone, which included a 53-yard pass to junior wide receiver Reynaldo Flores.

At fourth and goal, sophomore quarterback Gavin Hardison was able to complete a one-yard pass to junior tight end Trent Thompson for a touchdown, which helped the miners take the lead in the first quarter, 7-6.

At halftime the score was 17-19, making it the closest New Mexico bowl game since 2009.

Hardison completed 12-of-27 passes for 252 yards for the Miners and finished the 2021 season with 3,217 yards. Hardison became only the fifth Miner quarterback to throw for 3,000 yards in a season and finished in fifth for the most yards thrown in a single season in UTEP history.

On defense, juniors Tyrice Knight and Breon Hayward both had double-digit tackles for the Miners, Knight recorded 15 and Hayward recorded 11. Hayward (108) and Knight (102) become the first UTEP duo with 100+ tackles in a season since 2005.

Sophomore cornerback Torey Richardson was credited with his first career sack in the second quarter, along with a pass breakup, which was the team-high, eight this season.

“We hung in there and never gave up,” Head Coach Dana Dimel said in a post-game interview. “We kept fighting and had some opportunities and never gave up. That’s been our whole team this year. We played 13 games and 11 of those 13 have been great efforts.”

On a third-and-one at their own 49-yard line early in the fourth quarter, the Miners put in backup sophomore quarterback Calvin Brownholtz for a quarterback sneak, but Brownholtz caught the Bulldogs by surprise, throwing a 51-yard pass to junior tight end Trent Thompson for a touchdown.

With 4:03 left in the fourth quarter Hardison kept the ball and rushed for 10 yards but fumbled the ball, which was recovered by Fresno State. Fresno State decided to run down the clock by running the ball the rest of the game. The Bulldogs decided to put the game away with a victory formation on the UTEP 27.