UTEP gets a big victory against UNM at the Pit 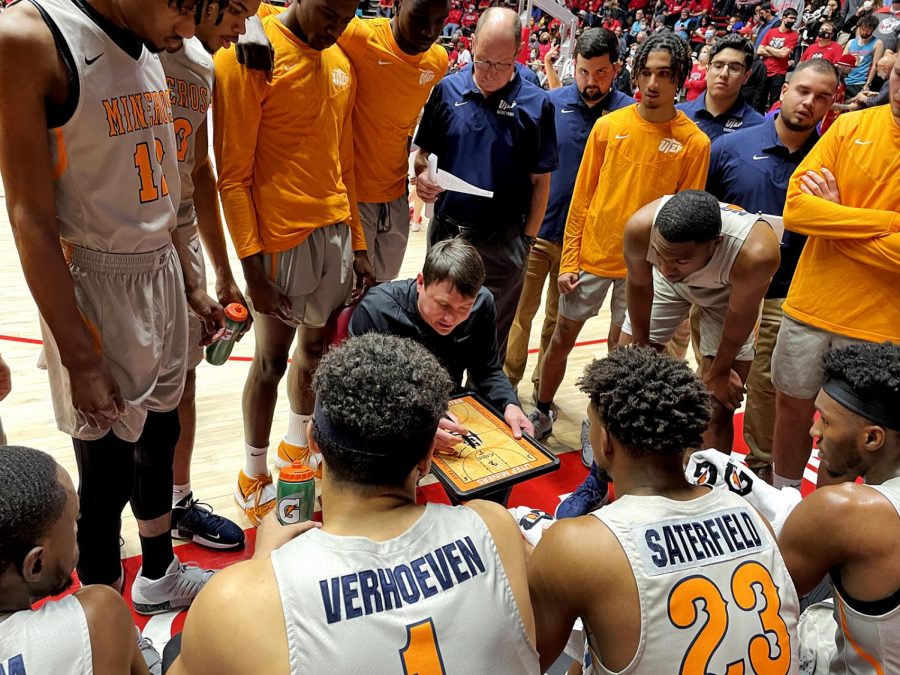 The UTEP Miners (5-4) got a big victory against The University of New Mexico (5-5,) on Dec.12 at The Pit in Albuquerque, New Mexico. The Miners came out of this game with a 77-69 victory thanks to a balanced offense and stifling defense.

“I’m just extremely proud of that group,” UTEP head coach Joe Golding said. “We’ve had a ton of adversity all year, maybe more so tonight than we’ve had yet. We had to come up with a new game plan in two days, and they came out and just showed incredible toughness. They weren’t scared or afraid of the moment. They just kept believing in the process.”

In the start of the first half, the Lobo’s and the Miners exchanged baskets back and forth. The Miners eventually made the score 16-1.

The Miners would continue to score with the help of junior guard Souley Boum, who successfully drained a 3-pointer to extend the Miners lead to 22-16. The Lobos followed up Boum’s 3-pointer with a small run to cut down the Miners’ lead to 25-23.

Sophomore guard Keonte Kennedy, drained a 3-pointer to put the Miners up 28-25. Kennedy would step up and would grab 14 points in the first half with the absence of junior guard Jamal Bieniemy.

UTEP’s defense was also active in this game as the Miners forced 10 turnovers, which is a season high for the Lobos.

Towards the end of the first half, both teams would go scoreless for a couple of minutes. But UTEP would get one bucket in to put their lead at 33-28. However, the Lobo’s answered back with a basket of their own to make the score 33-30.

In the start of the second half, the Miners added to their lead thanks to freshman forward Kevin Kalu and sophomore guard Jorelle Saterfield who put up a pair of scores to go up 40-31.

Kennedy continued to add to his stats by getting a lay-up to drop and push the Miners lead to 42-31. The Miners continued their 6-0 scoring run with a made basket to go up 44-31.

Redshirt junior forward Tydus Verhoeven got fouled while trying to get a bucket to fall. Verhoeven got both free throws in which put the Miners up 46-31.

The Miners offense would not stop scoring as Saterfield knocked down a big 3-pointer to put the Miners up 49-31.

Kennedy and Boum snapped the Lobo’s scoring run after making baskets to put the Miners up 54-42.

Junior guard Christian Agnew got a lay-up to go in to put the score at 65-51 after UTEP found a way to cut through the full court press by UNM.

The UTEP men’s basketball can be seen in action in their next game against McNeese State at 7 p.m on Dec. 16 at the Don Haskins Center.