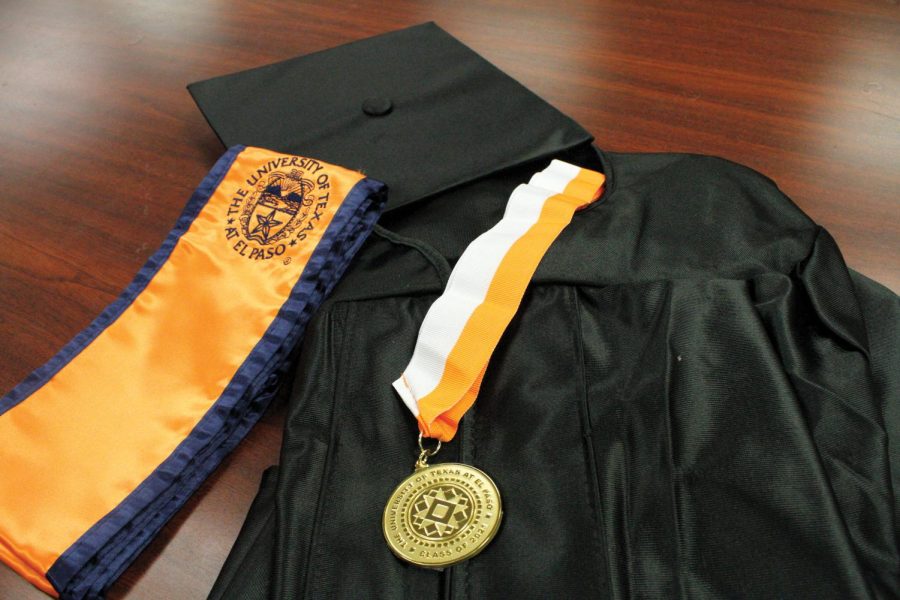 Graduation cap, gown and medal packets for upcoming graduates are available at the University Bookstore.

Celebrating the occasion is too costly for some students
As graduation draws near, it’s time to decide who to invite, where to hold your family get-together, and what to buy to commemorate the event. You have already dropped a lot in tuition, and you had to pay for your cap and gown – do you feel obligated to spend money on adornments as well?

A lot of students say yes, there is a pressure to get an expensive frame or a class ring to commemorate their time at college.  Some students have voiced that society and advertising companies play a big role in the pressure to spend, while others say their families push for it.

“I know my mom has already stated, ‘when you graduate, we’re going to go all out, we’re going to send out invitations; you have to buy them from your school,’” said Zipporah Rios, a sophomore at UTEP. “Personally, I feel there is a lot of pressure, but I don’t see a point in doing all of that nonsense.”

According to Cost Helper, the total cost of a graduation ranges between $300-$2,500, depending on what you purchase along with your cap and gown. These additional accessories can include a commemorative medallion, a class ring, announcements, graduation packs, frames, and additional materials for graduation parties.

UTEP senior Sadie Carrillo said she feels obligated, but is probably not going to make these types of purchases.

According to Education Data Initiative, the average four-year public university cost for a student living on campus is about $25,000 per year. This is before books and additional fees are factored in. In the 2015-2016 school year, 58% of full-time students held a job.

With college prices rising and the U.S. minimum wage remaining idle, students are struggling to cover costs. According to Urban Institute, 30-40% of undergraduates take out student loans to cover their costs, and 70% of 4-year college graduates have debt afterwards.

Considering the mounting cost of attending university alone, a grand celebration may not be an option for every student and some feel there is no reason to stigmatize a refusal to spend much on commemorative décor or memorabilia.

“It’s one thing to go through all these years of college and finally finish. Then to graduate, you need to buy a cap and gown,” said Elias Rivas, a sophomore at UTEP. “You’re going to buy all this stuff. It’s like, ‘I just spent all that money here.’”