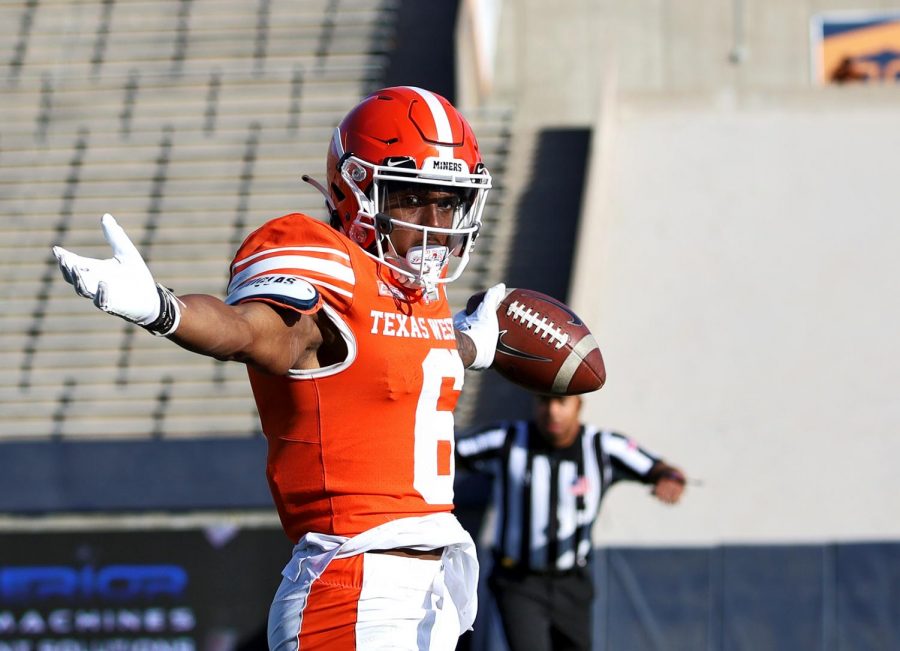 While on the cusp of an improved season for the UTEP football team, sophomore wide receiver Jacob Cowing has helped guide the Miners to a winning record this season. The 5’11 wide receiver has posted record breaking numbers this season.

Cowing has also been named to a couple of awards as well. He was named preseason All-Conference-USA, and the Biletnikoff Award list earlier this year. Cowing was named Pepsi player of the game recently against the University of North Texas.

“I was extremely honored and blessed to get those, the watch list Biletnikoff Award and all-Conference preseason awards,” Cowing said in an interview Nov. 17.

Cowing comes from Maricopa, Arizona, a two-star product from Maricopa high-school with his only offer being from UTEP. During his time in Arizona, he played varsity for three seasons and combined for a total of 89 receptions for 2,065 yards and 21 touchdowns. During Cowing’s senior year, he notched 28 receptions for 872 yards and 10 scores.

In his current season as a sophomore, Cowing has 1,015 yards and five touchdowns this season. In each game that he plays in, Cowing is fighting hard for more yardage and looking for the big play each time. In Conference-USA, Cowing is second in receiving yardage with 923 yards right behind junior wide receiver Jerreth Sterns from Western Kentucky University.

Cowing would also record his second 100-yard game of the season in an eight-catch, 110-yard performance against Abilene Christian University.

Cowing also finished the season with (insert number here after Friday’s game), which in the second most in school history. “I wanted to at least get 1,000 yards for this season, I was blessed enough to actually achieve that, also the last two seasons I only had three touchdowns,” Cowing said in a Nov. 17 interview. “I’ve also wanted to get more in that column, I think just those two things were my main goals.”

His freshman year was nothing to scoff at as Cowing had 550 yards and three touchdowns. He also ranked 37th in the nation and seventh in C-USA in yards per reception.

His impact on the football field is noticeable due to the fact he is always making big-plays to help the Miners offense that can struggle at times. But nonetheless, Cowing’s ability to make big plays helps the offense hit get going.

Statistics provided with the help of UTEP Athletics.