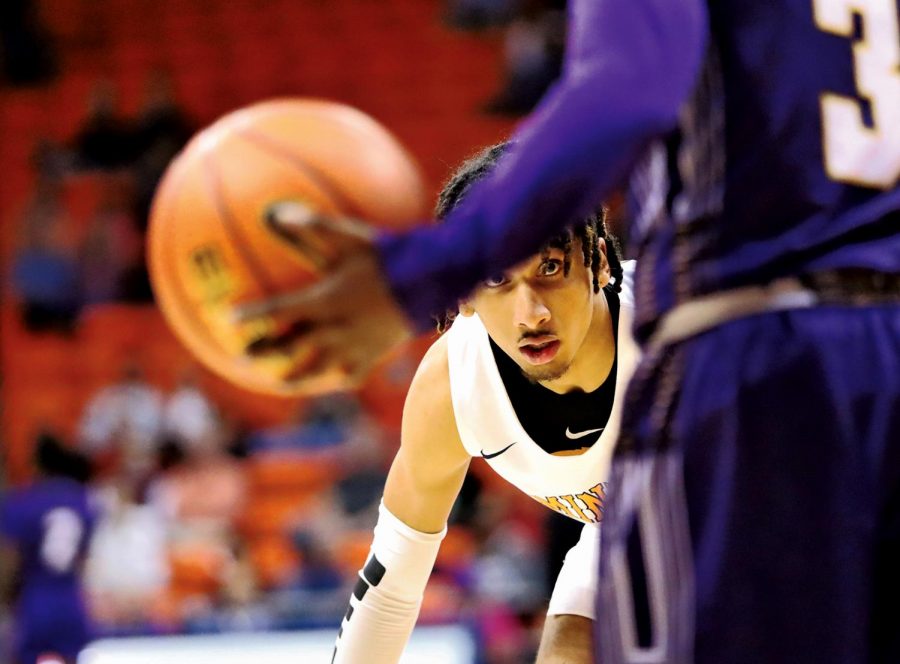 Freshman point guard Kezza Giffa plays defense during the first half of the home game against Western New Mexico on Nov. 9.

Kezza Giffa, freshman guard for the UTEP men’s basketball team, comes a long way from home to play for the Miners. Giffa is from Paris, France and has had a basketball in his hands for most of his life.

Giffa’s father, Sacha Giffa, was also a basketball player and played professionally in the Euro League and served as Kezza’s main inspiration. “It wasn’t until I was 6 or 7 that I started to figure out that my dad was somebody (famous),” said Giffa. “He became somebody I look up to. He’s definitely a role model for me.”

Giffa has had many people that influenced his game, including some with real championship experience. Due to his father’s prominence, Giffa was able to meet Tony Parker of the San Antonio Spurs. Giffa has modeled his game on Parker because of their physical similarities.

“He gave me great advice because I’ve always been skinny like him,” said Giffa. “He told me my size is an advantage, and I have to use it.”

One aspect of Giffa’s game in particular has been specifically influenced by Parker.

“His signature move is the floater, so I used to work on that a lot,” said Giffa.

Being left-handed is an added benefit for Giffa and is something that UTEP men’s basketball head coach Joe Golding values because of its rarity. Coach Golding also admires Giffa’s determination to travel across the globe to play for the Miners.

Coach Golding discovered Giffa through a mutual friend. Golding watched some of Giffa’s reel and liked what he saw.

“I was a top five scorer in the France U21 league,” said Giffa. “I think he saw my highlights and loved the way that I played.

In the under-21 leagues in France, Giffa was averaging 17.8 points per game and earned a spot on the France national under-19 basketball team. Giffa’s hard work in France is what got him to UTEP but now he is working on honing his skills.

“I’m proud of Kezza,” said Golding “He got here late (due to Covid protocols). He’s getting tougher and tougher, and I’m proud of where he’s going. He’s coachable.”

Giffa grew an admiration for United States basketball after watching a documentary on the Fab Five of Michigan with his father.

“I loved American basketball and I always wanted to be here,” Giffa said. I’m happy about the opportunity to play here with Coach Golding, who is a great coach. “With hard work and dedication Giffa taught himself English by listening to music and watching American Television with French subtitles. He is also a fan of U.S. pop culture which has helped him tremendously.

In the future, Giffa hopes to own a business and be his own boss, therefore he is majoring in general business. For now, he is focusing on basketball and hopes to play professionally and internationally one day for his country.

The Miners’ next home game is at 6 p.m. Dec. 3 at the Don Haskins Center against New Mexico State University for the Battle of I-10.