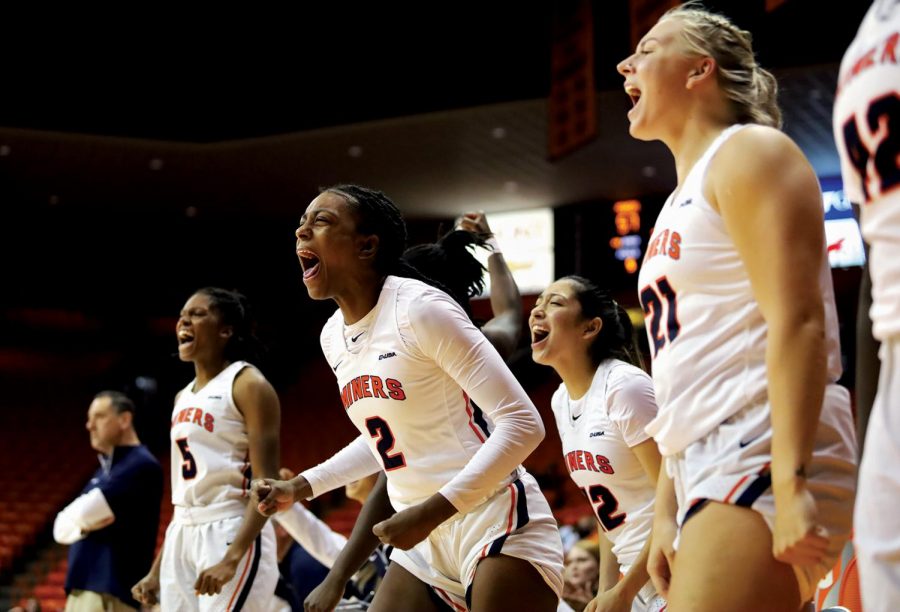 Teal Battle along with her teammates scream for joy during the last quarter of the game against St. Mary's University during their home game on Nov. 7 at the Don Haskins Center,.

UTEP women’s basketball is 4-0 for the first time since the 2017-2018 season under Head Coach Kevin Baker. The Miners have beat each team they have faced throughout the season by double digits.

In its season opener against Incarnate Word, the Miners defense was unstoppable as they forced 25 turnovers and recorded 11 steals; they also tallied 17 assists and only 13 turnovers throughout the game. The Miners got off to a slow start, but junior guard Destiny Thurman began a 15-0 run for UTEP with a set of free throws. Against Incarnate Word, UTEP shot over 47 percent from the floor and more than 38 percent from downtown. The final score was 81-47, a 34-point win for the Miners, making it the largest season opener under head coach Kevin Baker.

The second win for the Miners was against the University of North Dakota, where it got off to a fast start at the beginning of the game going on an 18-4 run; the momentum continued all the way to the end. UTEP scored 80-plus points in back-to-back games to start the season for the first time since 1994-95. The Miners connected on 50 percent from the floor and forced 21 turnovers which converted into 22 points. The final score was 89-69; it was also the first time in four years with consecutive wins by at least 20 points to tip off the year.

The most recent win for the Miners was against I-10 rival New Mexico State University on Nov. 17, where the Miners came out victorious with a score of 76-61. The UTEP defense recorded a season-high of 28 turnovers and blocking four shots. The Miners have won five consecutive games over the Aggies for the first time since the 2012-2013 and 2015-2016 seasons. UTEP shot over 50 percent from the field and went 19-of-27 from the foul line. Sophomore guard Avery Crouse led the Miners with a season-high of 15 points on 5-of-10 shooting. While Gallegos tallied 14 points and a team-high of four assists.

UTEP’s bench stepped up during the game against NMSU. Freshman forward Brenda Fontana put up a career-high of 8 points along with Tac also putting up a career-high of 8 points.  The bench combined for a total of 29 points as Petree scored 6 points along with a team-high of two blocked shots, Eliana Cabral with two and Erin Wilson added five points.

“One of the things we decided to do in the spring was, we knew we had to go and get better and rebuild our bench,” Baker said in a post-game interview. “It was really telling to see when our bench comes to play like that. Not only did our coaching staff do a good job recruiting, but the players did a great job playing. We leaned on our bench, we needed our bench, and it couldn’t have happened to a better bunch of young ladies who work hard every day and deserve it.”

As for how the Miners are doing against conference rivals, UTEP is matching well. In scoring offense UTEP is ranked third with 318 points, averaging 79.50 percent, however in scoring defense it is ranked eighth with 239 points, averaging 59.75. In 3-point field goal percentage the Miners are fifth with .329 but are twelfth on defense with .333. The Miners are thirteenth in rebounding offense with an average of 35.50; the defense is number one on rebounding defense, average 28.25. On assists UTEP is first in the conference, average 16.00.

The next game for the Miners is at 1 p.m. Dec. 4 at the Don Haskins Center against Utah State after their original game scheduled for Dec. 1 against NMSU got postponed due to COVID-19 related concerns.