Miners bounce back in win 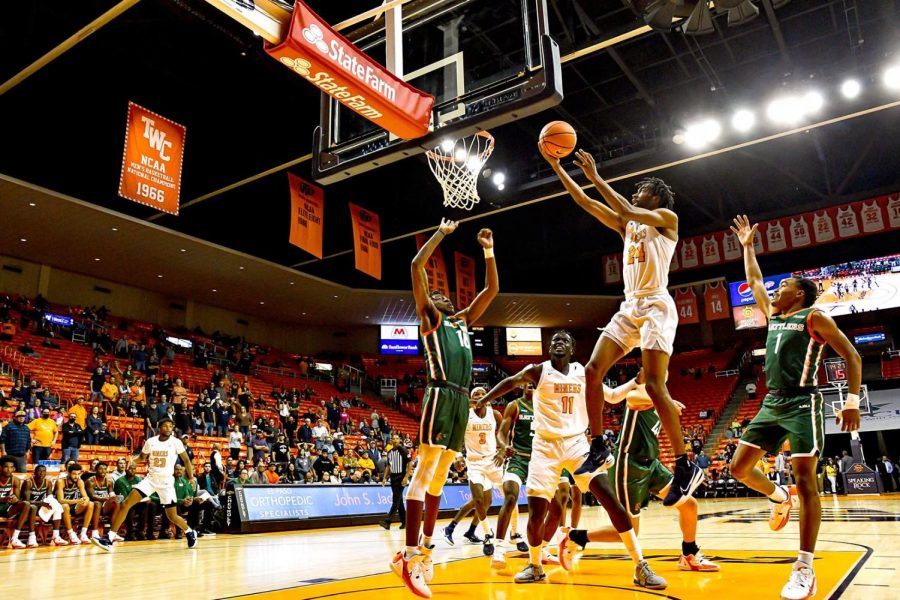 Jamal Bieniemy goes up for a layup against FAMU on Nov. 24, 2021, at the Don Haskins center. Photo by: Ace Acosta

The Miners (4-2,0-0) had a bounce-back win against The University of Florida A&M (1-3,0-0) on Nov. 24 at the Don Haskins Center. The offense executed their plays better, shooting 35 percent from the floor, and 34.8 percent from the 3-point line. UTEP’s defense played well, forcing 20 turnovers.

In the start of the first half, the Miners nor FAMU could get anything going on the offense. However, sophomore forward Bonke Maring landed the Miners’ first two points, with Bieniemy scoring a layup soon after to give the Miners a 4-0 lead.

At the 10:56 mark, FAMU got their first five points from free throws to bring the score to 13-5. A bit later, Saterfield made his presence felt by hitting a 3-pointer to put the Miners up 16-5.

The Miners’ defense was a force in this game as UTEP forced 14 turnovers in the first half.

At the 2:25 mark, freshman forward Jamari Sibley nailed two free throws to put the Miners up 25-20. Saterfield towards the end of the half, drained a three pointer for a 30-24 Miners lead.

Sophomore guard Keonte Kennedy would get a steal on the offense to put the Miners up 37-30.

FAMU drained a 3-pointer to cut down the Miners lead to 62-52, but the Miners would go onto win 67-53 after FAMU could not generate anymore offense.

The Miners are right back in action at 6 p.m. Friday, Dec. 3 at the Don Haskins Center against New Mexico State University (NMSU).