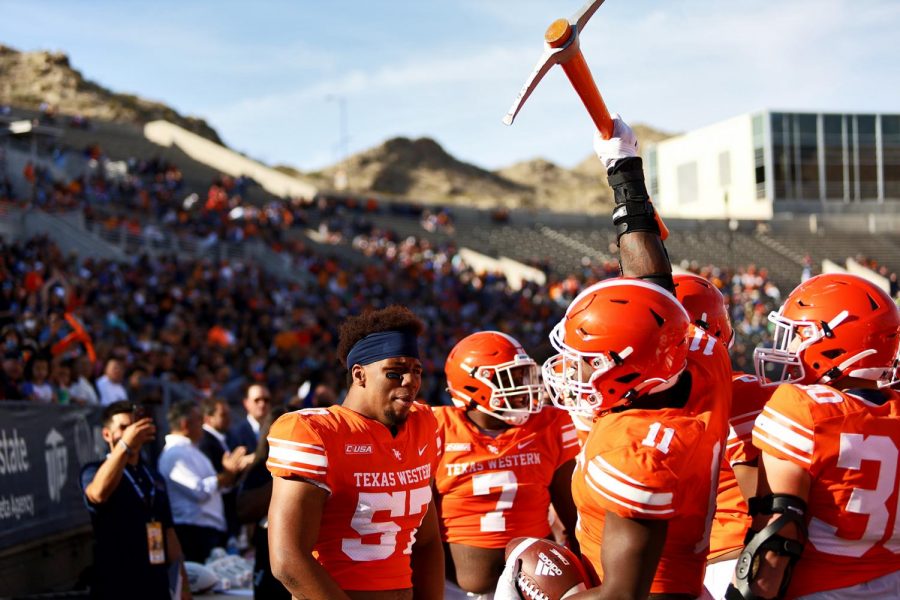 Khalil Warfield cheers with fans and players on the sidelines after a touchdown during the football game against Rice University on Nov. 20.

On Saturday afternoon, the Miners (7-4, 4-3 Conference USA) managed to rally past Rice (3-8, 2-5 C-USA) to secure their seventh win on the season with a final score of 38-28 and end their three-game losing streak.

The Miners managed to start fast and score a touchdown on their opening drive for the fourth time this season. The score was 7-0 after a 75-yard drive and a 7-yard touchdown pass from sophomore quarterback Gavin Hardison to sophomore wide receiver Jacob Cowing.

Rice managed to tie the game after a 1-yard rushing touchdown from sophomore running back Ari Broussard.

UTEP managed to take the lead again after a 14-yard touchdown pass from Hardison to senior wide receiver Justin Garrett. The Miners led with a score of 14-7 with 8:22 left in the half. This would be the last time the Miners scored in the half.

The Owls answered back with a 6-yard touchdown pass from graduate quarterback Jake Constantine to freshman tight end Jack Bradley to tie the game with 1:03 remaining in the half. After an interception from Hardison, Rice was granted one more opportunity to put points on the board before the half.

After a 33-yard touchdown pass from Constantine to graduate wide receiver Cedric Patterson III, the Owls had taken their first lead of the game. At halftime, Rice led UTEP with a score of 21-14.

While the Miners didn’t end the first half the way they wanted, they rallied to score 24 points unanswered and win the game.

Junior kicker Gavin Baechle kicked a field goal for the Miners midway through the third quarter to cut the Owls’ lead to 21-17.

The next score was a touchdown for the Miners after sophomore Calvin Brownholtz powered in the ball from the one-yard line to give the Miners the lead with a score of 24-21.

On “Senior Night,” it was fitting that the next touchdown was a rushing touchdown from the one-yard line from senior running back Quardraiz Wadley. The Miners now led the Owls 31-21.

The final touchdown of the night also came from Brownholtz after another short rushing touchdown. The Miners won the game 38-21 and extended Rice’s losing streak to four games.

“This game we needed to be more aggressive,” Head Coach Dana Dimel said in an interview following the game. “The guys went out and played really aggressive and showed that they can have a different dimension to our offense.”

Hardison passed for a career-high of 366 yards, the most by a UTEP player in 12 years. His 23 completions also tied a career high. The 488 yards the Miners had offensively was a season best.

Cowing tied the school record after his 13th 100-yard receiving game of his career. Cowing has eight 100-yard games this season and has the most 100-yard games by a Miners since Hughes registered a school-record of nine in 1965.

Cowing also joins Hughes and Ed Puishes as the only players in history with three games of 170 receiving yards after finishing the game with 170 yards and 11 receptions. Cowing has 1,267 receiving yards this season, the third most in school history.

After 16 successful field goals this season, Baechle is tied for the fifth most in a season in school history.

The Miners will be back in action at noon Friday, Nov. 26 for an away game against UAB as they wrap up the regular season. The away game will be streamed on ESPN+.

Statistics provided with the help of UTEP Athletics and Rice University Athletics.

Emily Autumn Velasquez is the sports editor and may be reached at [email protected]; @emilyautumn20 on Twitter.