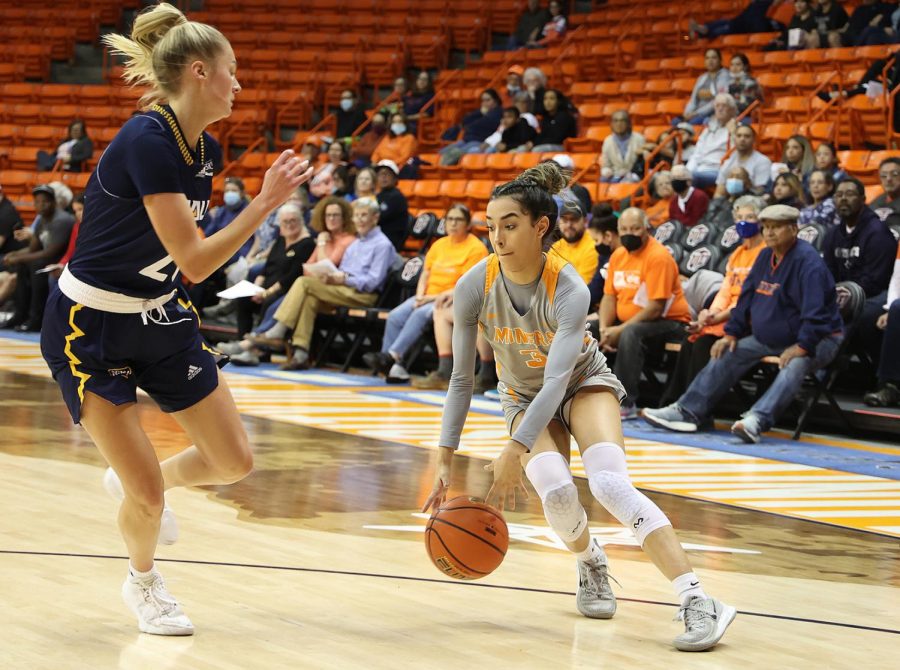 Guard Katia Gallegos dribbles past a NAU defender on Nov. 20, 2021, at the Don Haskins center. Photo by: Ruben R. Ramirez

On Saturday night, the UTEP women’s basketball team (4-0) defeated NAU (1-3) at the Don Haskins Center to remain unbeaten after a final score of 72-62.

UTEP is off to a 4-0 start for the first time since head coach Kevin Baker’s initial season in 2017-2018. All four of their wins have been by double digits, which is something that hasn’t happened to kick off the year since the Miners’ last Conference USA Championship team did so during the 2015-2016 season.

Gallegos came out with no hesitation, scoring nine of her points in the first quarter. Overall, she shot 8-of-10 from the floor, grabbed seven boards, and dished out a team-high of five assists. This is her fourth consecutive game reaching double digits in scoring, which is one game shy of matching the longest streak in her career.

Sophomore guards Eliana Cabral and Erin Wilson came off the bench to combine for 11 points. Cabral managed to put up seven points, six rebounds, and two dimes. Wilson shot 2-of-3 from the field.

Overall, UTEP shot 44.8 percent and 7-of-10 from the foul line. The Miners managed to outrebound NAU, 43-30, and forced 19 lumberjack turnovers.

“I was really pleased with the first half, and how we came out ready to play,” head coach Kevin Baker said in an interview following the game. “But I’m also pleased how we were able to hold on against a very good team, a very well-coached team that we knew was going to make a run at us.”

NAU had tied the score 7-7 after NAU junior guard Nina Radford sunk a 3-pointer, but after that the Miners took control of the quarter. Crouse answered with a driving layup and the Miners went on to outscore the Lumberjacks 13-4 to take a 20-11 advantage.

UTEP outscored NAU 24-13 in the second quarter, Gallegos scored 15 of her points in the first half after being 6-of-7 on shooting.

At halftime, the Miners led the Lumberjacks 44-24.

NAU made a push to try and comeback in the second half, and outscored UTEP 38-28. NAU started to chip away at UTEP’s lead after a valiant effort by NAU senior guard Lauren Orndoff after making a pair of free throws with 3:31 remaining in the game.

These free throws cut UTEP’s lead to only nine points with a score of 64-55. However, Battle answered back and made two free throws, and Crouse scored on a driving layup to extend the lead to 13 points with a little over two minutes left in the game.

The Miners held up strong and won the game with a final score of 72-62 to advance to a 4-0 record.

UTEP’s next matchup will take place in Sin City to compete in the South Point Thanksgiving Shootout on Nov. 26 and Nov. 27. Their first opponent will be Seattle University at 5 p.m. on Friday, and their second matchup will be against Kansas at 5 p.m. on Saturday.

Those interested in following the women’s journey can tune in to “The Home of UTEP Basketball” on 600 ESPN El Paso or the UTEP Miners App to hear Mando Medina call the games.

Statistics provided with the help of UTEP Athletics and NAU Athletics.