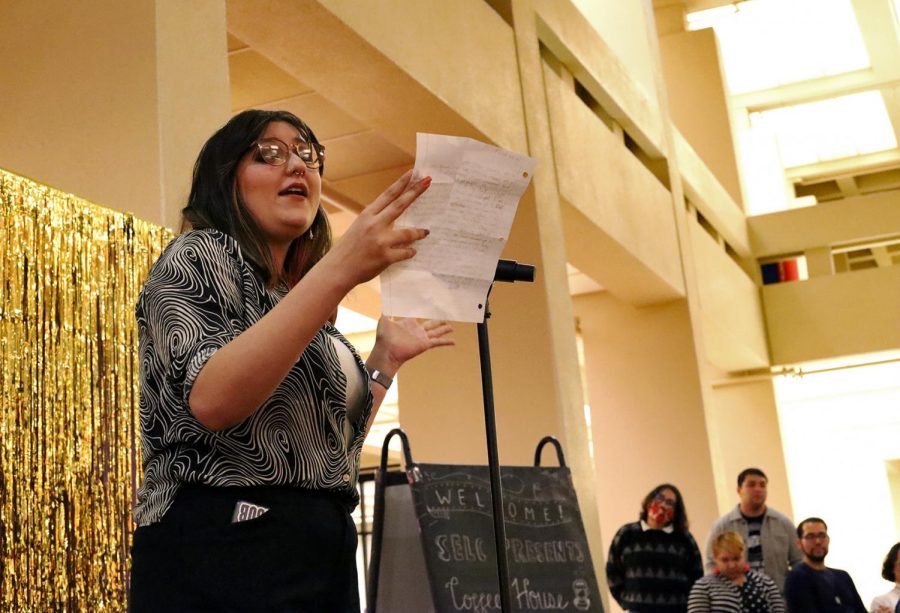 Some students performed original songs and covers while others made their fellow students fall out of their chairs with laughter while showing off their stand-up comedy skills. One student even demonstrated their slam poetry skills.

Refreshments such as coffee and delicious hot chocolate were provided to audience members. Guests also got to enjoy sweet treats such as brownies and cookies. Attendees also got to write inspirational quotes with colorful markers on the dry erase board that was there. .

“We know that there’s a lot of talent here at UTEP, and we wanted to showcase that. This was a great way to welcome everyone back and it’s a good distress for everyone before final’s week,” said Elizabeth Jakobsen, a sophomore in Neuroscience and intern for SELC. “We will host another Coffee house open mic in the spring semester as well.”

Everyone who attended joined in on the fun, many of the performers interacted with the audience and engaged them in their performances. Even though performing in front of a live audience can be very nerve-racking, none of the performers let that stop them from putting on a great show. One stand-up comedian left it all on the stage and was the highlight of the whole night.

“I’ve been writing jokes for a while now, and I had always wanted to try stand-up comedy. I saw that there was going to be an open mic, so I thought I’d come try it out,” said Brandon Joseph a junior majoring in psychology. “I think my performance went alright until I made a risky joke, but that’s comedy it’s all about taking risks.”

Other performances included one student who sang Frank Sinatra’s “Fly me to the moon” to his partner and did an acapella version which included the whole audience clapping on beat. Another student almost brought the audience to tears when she showcased four of her personally written poems about her life.

“I feel pretty good about my performance, it was nice to show off my poems to other people instead of just keeping them to myself,” said Elise Keniherndon a sophomore majoring in Theatre Performance. “I’ve never had an outlet for my poetry besides posting it on social media. I thought this would be a good way to let things go, have fun and meet new people. My poetry has always been a therapeutic outlet for me, it’s a way to express my emotions about my life.”

Alyson Rodriguez is a contributor and can be reached at [email protected]; @alyson_rod1127.