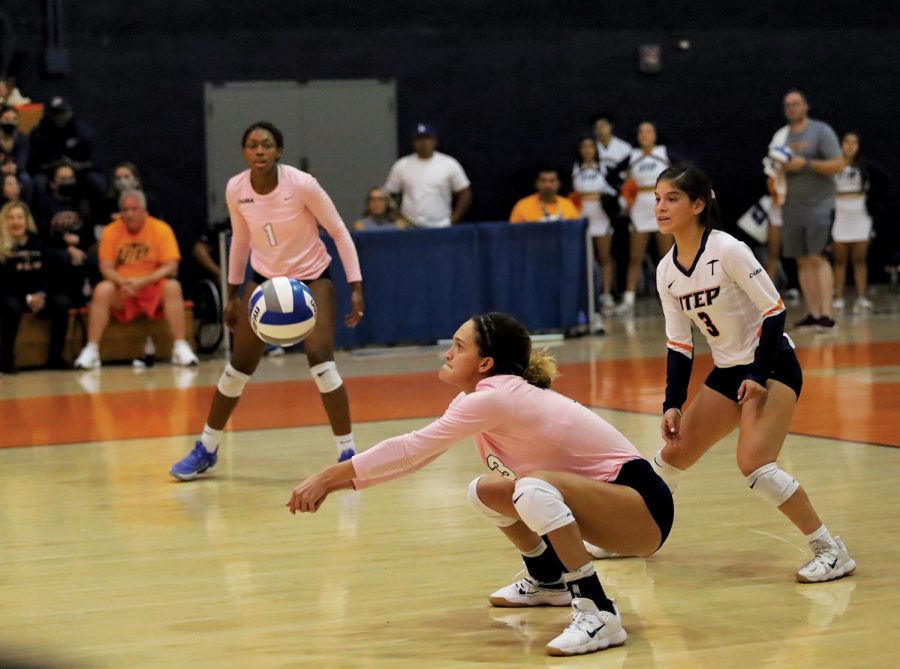 Outside Hitter Paulina Perez Rosas bumps the ball during the game against the University of Alabama at Birmingham on Oct.22.

The UTEP volleyball team (19-6, 8-4 Conference USA) swept North Texas (15-11, 7-5 C-USA) on Saturday and Sunday to secure the number 2 seed on the West Bracket for the C-USA Championship at Memorial Gym.

The Miners were able to finish Saturday’s game with three blocks against North Texas and hit .371.

The first set consisted of a back-and-forth exchange of points, but after a kill from freshman outside hitter Ema Uskokovic that secured the lead for the Miners, they managed to go on a 7-1 scoring run. The Miners managed to win the set after freshman setter Ryley Frye served up back-to-back aces.

In the second set, the Miners held up strong and went on a 3-0 scoring run and never allowed Mean Green to tie or take a lead over them. The Miners’ power offense is what helped them secure a 2-0 advantage in the match.

For the third set, North Texas came out strong trying to avoid a sweep which called for a set that consisted of eight tied scores and four different lead changes. The score was tied 18-18 before UTEP took the final lead change and were able to pull off the sweep.

“We team did a really good job at executing today,” head coach Ben Wallis said after the game Saturday. “We worked hard all week at trying to have multiple ways to bother them (North Texas) and get them out of rhythm.”

UTEP racked up six service aces in their victory over UNT and had eight blocks. They also hit .314 while North Texas hit .022.

In the first set, the Miners managed to set the tone by going on a 3-0 scoring run. They came out strong and aggressive to the point that UNT couldn’t keep up, which resulted in them winning the set after a 6-0 surge.

The second set was also won after a strong front put up by the Miners. North Texas attempted to catch up to the Miners but couldn’t keep up with UTEP and their fast-scoring performance, resulting in UTEP having a 2-0 advantage in the match Sunday afternoon.

In the final set of the match, the Miners maintained a minimum five-point lead throughout the whole set. North Texas helped the Miners reach set point after six errors on their part. The game winning kill was delivered by sophomore outside hitter Ava Palm and secured the second seed for the Miners for the campaign in the C-USA Championship Tournament.

“This was a very special performance for my team, and they rose to the occasion and did exactly what they wanted to do,” Wallis said after Sunday’s victory. “They were in total control the whole time.”

Sophomore defensive specialist Alyssa Sianez was also named C-USA defensive player of the week after her performance against the Mean Green this weekend.

UTEP’s next match is against their I-10 rival New Mexico State on Nov. 10 for an away game. The match will have live stats available and will be streamed on the WAC Digital Network.

Stats acquired with the help of UTEP Athletics.