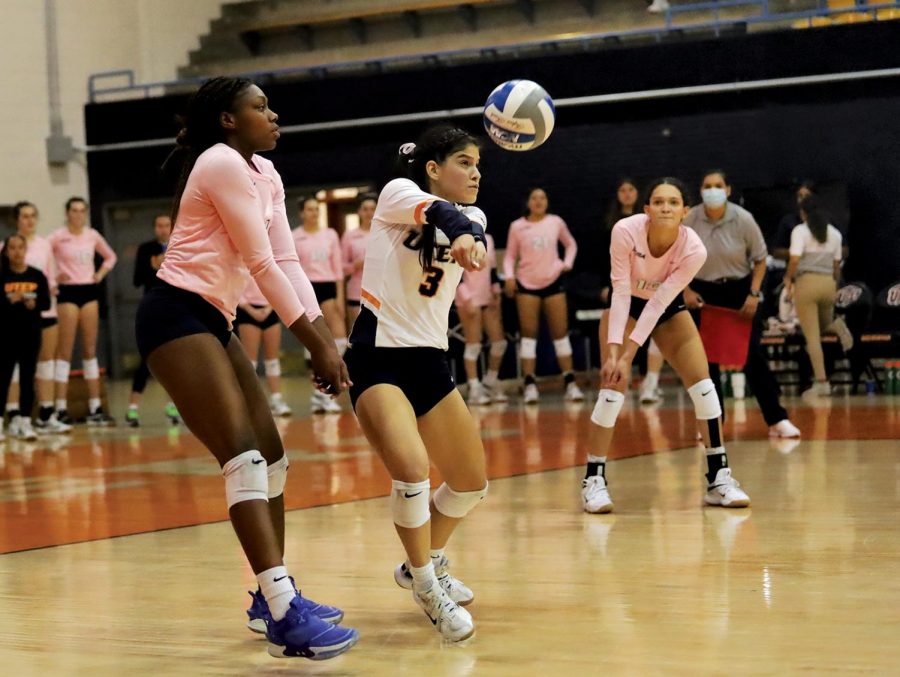 Defensive specialist Alyssa Sianez bumps the ball during the game against the University of Alabama at Birmingham on Oct. 22, 2021.

The UTEP Miners (16-5, 5-3 Conference USA) took on the UAB Blazers (9-11, 4-4 C-USA) at Memorial Gym over the weekend. The Miners came up short in five sets against the Blazers on Friday evening, but managed to sweep the Blazers in three sets Saturday afternoon.

The Miners managed to record nine blocks and six service aces in their loss against the Blazers.

“UAB did a really good job on the backset tonight and we didn’t have an answer for them,” head coach Ben Wallis said in an interview Friday evening.

Outside hitter Fernanda Maida led the Blazers with 23 kills, outside hitter Alex Kells followed with 15. Middle blocker Tatijana Fucka had four blocks in the win over UTEP.

The first set consisted of UTEP trying to catch up with the Blazers, but ultimately UAB’s defense was too much, and the Miners fell short. After 13 tied scores in the second set, the Miners were heading into set point then the Blazers went on a 5-0 scoring run to take a 2-0 advantage in the match.

The third set was where things started to pick up for the Miners as they stopped the Blazers from sweeping them with a 5-0 scoring run to win the set.

The fourth set was another intense exchange consisting of the Blazers looking to end the match and the Miners seeking a comeback. A kill by middle blocker Kenidy Howard helped give the Miners the advantage and after an attack error on the Blazers would result in the Miners winning the fourth set.

In the fifth set, the Miners were able to tie up the score at 6-6 after a kill by Perez Rosas. However, the Blazers finished strong and went on to pull ahead with a 5-0 scoring run and take both the set and the match.

The Miners managed to record eight blocks and four service aces while hitting .361 in their win.

“All in all, it was a massive team effort because that’s a tough team to sweep,” head coach Ben Wallis said after the game in an interview.

For the Blazers, Kells led the team with 13 kills, Fucka had four total blocks, and middle blocker Kiana Mack had two service aces.

The Miners dominated early in the first set. However, in the second set the Blazers maintained a five-point lead for half the set, but the Miners went on a 7-0 scoring run to pull ahead. After the set went into only a three-point difference, back-to-back kills by Uskokovic led to the Miners pulling off the set win.

The third set consisted of 16 tied scores and five different lead changes, both teams producing scoring runs to try and take the lead. Tied at 23-23, the Miners recorded back-to-back kills thanks to Darley and outside hitter Paulina Perez Rosas to pull off the win and sweep the Blazers.

The Miners next match will be against the Roadrunners as they travel to San Antonio, Texas. They play UTSA Oct. 29 and Oct. 30, and the matches will have live stats available.

All UTEP stats provided by utepathletics.com and the Department of Athletics Strategic Communications.

All UAB stats provided by uabsports.com