‘No One Gets Out Alive’: Movie review 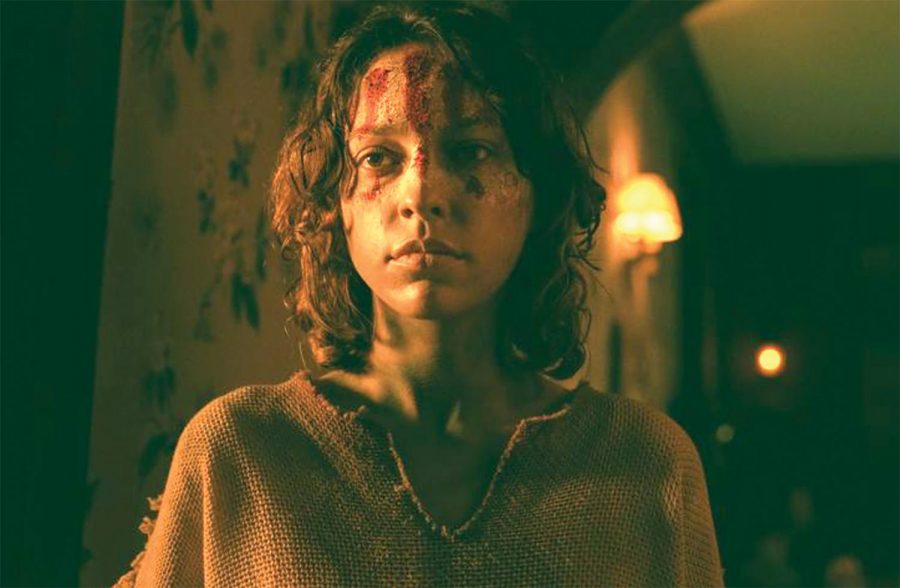 A scene from the movie No One Gets Out Alive. Courtesy of Netflix

Released on Sept., the Netflix Original “No One Gets Out Alive” tells the story of Ambar, an immigrant who seeks shelter in a rundown Cleveland boarding home. Unaware of what has occurred in the boarding home prior to her arrival, Ambar takes refuge with landlord brothers Red and Becker.

The film starts with a montage of what seems to be men digging up some box along with moths being seen across the screen, which later indicates the unwanted presence in the room. We then see a random woman who stayed in the boarding home prior to the arrival of Ambar. We do not know who this woman is besides living there prior and possibly being the first victim at the brother’s hands in the home.

Throughout the movie, Ambar struggles with maintaining a job and trying to forge an identification to avoid any trouble with law enforcement. From discovering strange sounds and hallucinations of sorts, Ambar becomes suspicious of the brothers and the disturbances she is enduring.

At this point in the film, it is shown that Ambar has lost her mother, and her death becomes Ambars’ hallucination caused by little sleep due to the disturbances in the home. From unknown crying coming from an old neighbor’s room to Becker banging on her bedroom door late at night, Ambar starts to find herself having nightmares of her mother, and the stone box seen in the beginning credits.

Here, the plot begins to slow, and two other roommates enter the home and storyline: suggesting the two will later be killed or sacrificed. After Ambar loses her job and is desperate to leave Cleveland, she finds herself experiencing first-hand the presence of two unlikely visitors, Mary, who later is revealed to be the mother of both Becker and Red, and an unknown woman.

After leaving the boarding home in fear for her life, she contacts her distant cousin, who we meet earlier, in the film, in hopes of finding refuge with him. After being told he cannot help at that moment, she looks for Red to get her deposit back to seek help elsewhere. Ambar speeds across town looking for help and she is later eventually found by Red at a diner.

He convinces her to drive back to the boarding home for her money back, which is just a trap to have her be there for the ritual Becker wants to accomplish with Ambar and the other two women living in the home.

With Becker and Red successfully starting the ritual with one of the two other women, they attempt to sacrifice Ambar. Ambar lays on a stone block and dreams of her mother, like she has done many times throughout the movie, where the ‘demonic’ entity crawls out of the stone box seen again throughout the movie.

The tense scene raises eyebrows and tension as this caterpillar-like creature crawls towards Ambar as she continues to dream of her mother, which is the ‘demon’ but in the form of her mother, to trap her in a trance and eventually eat her head off.

Breaking out of this trance, Ambar escapes and finds Becker and Red preparing the next victim, where she then defends herself, kills Becker, and sacrifices Red to the unknown demonic creature. She then leaves home with a sense of power from killing her captors and letting go of the past.

Overall, the movie is another attempt at reminding viewers you should never dig up things you do not know about. It is not the best movie, but for the price you pay monthly for a Netflix subscription, it will keep you entertained, all while asking a lot of questions. The plot has many holes and leaves much to think about, specifically why Becker and Red are connected to this box and why their father dug it up.

With little to no jump scares, the movie will not traumatize you but will make you feel unsettled and question all the stone boxes you may see; the unsettling tone is the scariest thing next to that demonic entity.

Itzel Giron may be reached at [email protected]; @itzel_anahi_16 on Twitter.