Miners bulldoze past the Bulldogs 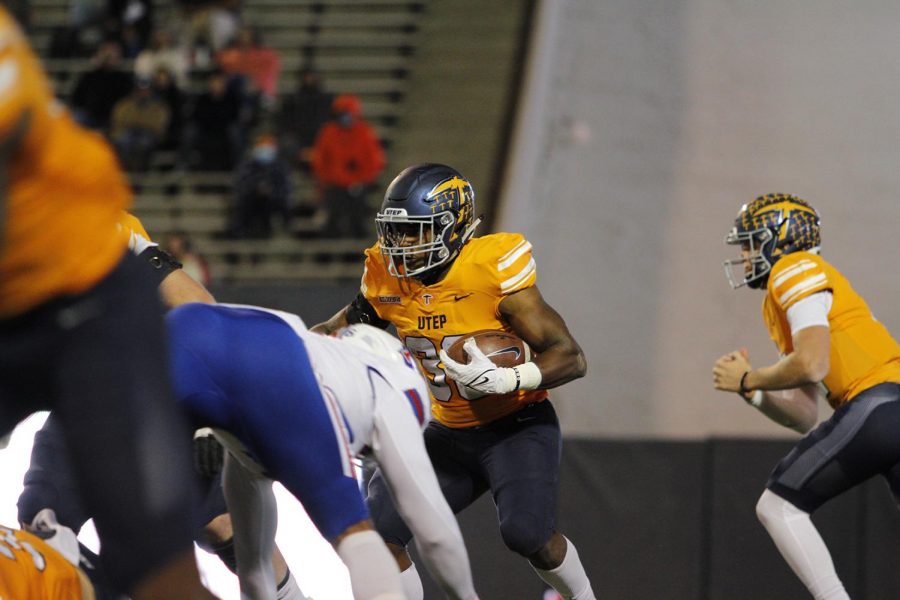 Deoin Hankins runs the ball through the LA Tech defense on October 16, 2021.

The UTEP Miners improved to (6-1, 3-0 C-USA) after beating the LA Tech Bulldogs Saturday night at the Sun Bowl. This win makes the Miners 3-0 in Conference USA play for only the second time ever and 6-1 for the first time since 2005.

This win also means the Miners are eligible for a bowl game for the first time since 2014. This win against LA Tech ended an eight-game losing streak against the Bulldogs and was their first victory against them in El Paso since 1939.

After LA Tech won the toss and decided to defer, the Miners offense was put to work. Early on, the Miners were faced with a fourth and one, electing to go for it. After a quarterback sneak play from Hardison, they were successful in getting a first down. This gave the Miners offense momentum and helped set up the 16-yard touchdown by running back Deion Hankins to put the Miners up 7-0.

The defense came out strong right away and forced the Bulldogs to go three and out on their first offensive drive, putting the Miners offense right back to work.

It was on this drive that Hankins was able to record his second touchdown of the night from four yards out to increase the Miners’ lead to 14-0. This is the fourth time in Hankins’ career that he has multiple rushing touchdowns in a game, and the first time this season.

The Miners defense came up strong by stuffing the rush on a fourth and one when LA Tech was driving and in the red zone late in the first quarter to keep the Bulldogs off the board.

The Miners offense struggled to move the ball downfield to start the second quarter, resulting in their decision to punt the ball. UTEP’s Joshua Sloan punted the ball 62 yards to set LA Tech up on their own two-yard line. On the very next play, the Miners defense was able to not only stuff the run but come out with a safety, increasing the Miners lead to 16-0.

LA Tech finally managed to get a field goal on the board, which would be their only time scoring this game, with 6:56 remaining in the second quarter.

While UTEP’s offense struggled in the second half to move the ball downfield due to some turnovers, the defense was very effective in forcing turnovers.

However, with 5:07 remaining in the third quarter, UTEP kicker Gavin Baechle sent a ball down the middle for 41 yards to increase their lead 19-3.

In the fourth quarter alone the Miners defense managed to record three interceptions, their first time doing so in a game since 2012 at East Carolina.

The Miners won the game with a final score of 19-3.

The Miners defense held LA Tech to only a field goal, which is LA Tech’s fewest points scored ever in a Conference USA game.

“The performance by the defense might be the best I’ve ever seen in a football game that I’ve been involved in,” UTEP head coach Dana Dimel said after the game.

While most of the points scored offensively came early, there were some notable statements made by the offense.

Quarterback Gavin Hardison threw for 283 yards, the most he has ever thrown against a C-USA opponent. Jacob Cowing went over 2,000 yards for his career with 166 yards receiving against the Bulldogs, while also posting his 10th 100-yard receiving game of his career, tied for the fourth-most in school history.

This week the Miners have their second bye week of the season but play an away game against Florida Atlantic 4 p.m. Oct. 30. UTEP’s next home game will take place at 2 p.m. Nov. 6  against UTSA.