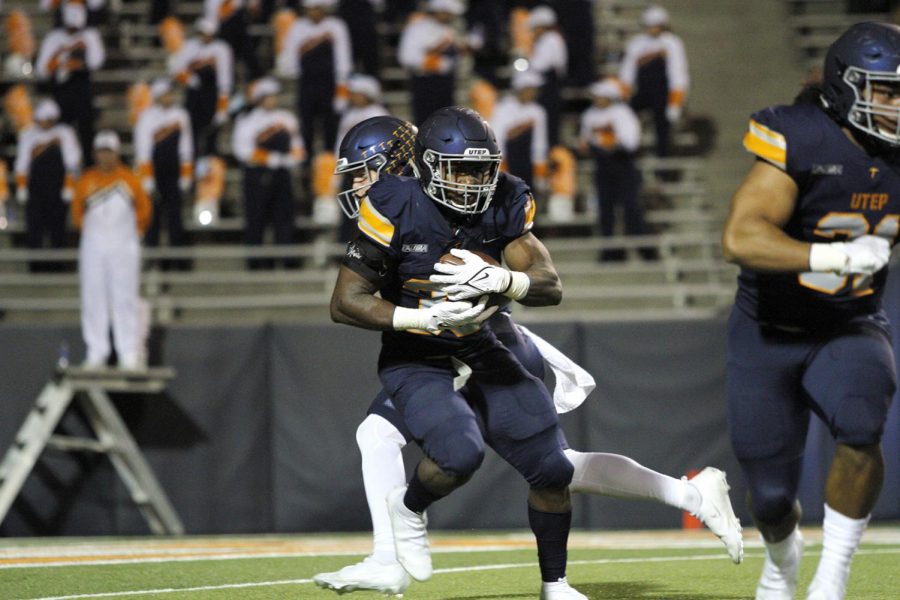 Deion Hankins runs the ball against Old Dominion on October 2, 2021

The Miners (4-1,1-0) win in a thriller against Old Dominion University (ODU) (1-4 0-1) Saturday night, Oct. 2 at the Sun Bowl. The Miners took a commanding 17-0 lead in the first quarter, and the defense also played a part in that by forcing two sacks, two turnovers, and stuffing Old Dominion’s run game. In the second half, the Miners struggled at times to get the ball moving but were able to find enough rhythm to win the game 28-21.

In the start of the first half, Old Dominion began to move the ball on the Miners defense, however, Walter Neal Jr. was able to force a turnover that would put UTEP inside Old Dominion territory.

Sophomore wide receiver Jacob Cowing moved the chains on a third and long from a long ball that was thrown by redshirt sophomore quarterback Gavin Hardison, giving the Miners a spark on the offense. UTEP could not punch it in for a touchdown so instead settled for a field goal to take the first lead of the game 3-0.

UTEP continued to drive the ball down near their goal line and were able to score a touchdown after a pass to the corner of the endzone thrown by Hardison to Garrett to increase the Miners lead 10-0.

Old Dominion tried to answer UTEP’s score but could not answer as the Miners stout defense got a sack from Walter Neal Jr. and forced a three and out.

The Miners converted another fourth down behind redshirt freshman Deion Hankins’ strong running that put them at the 10-yard line near the endzone. The Miners were able to punch the ball in for a touchdown after a pass from Hardison to Tyrin Smith to increase the Miners lead 17-0.

Right before the half, Old Dominion managed to score a touchdown after a pass from quarterback D.J. Mack Jr. to cut the lead to 17-7 with the Miners still ahead.

In the start of the second half, the Miners began with the ball but were called for a delay of game that would push them back near their own five-yard line. They were able to move out of danger and get a pass from Hardison to Cowing that went all the way passed the 30-yard line near the red zone.

UTEP unfortunately could not score the touchdown and walked away with a field goal to make the score 20-7.

Old Dominion moved the ball down the field with ease with passes from Mack. The Monarchs would score on a quarterback draw from Mack from inside the five-yard line to cut the lead down to 20-14 with the Miners still ahead.

UTEP went three and out when trying to answer the Monarchs score. On the next play special teams would get their punt blocked and the Monarchs returned it for a touchdown to take a 20-21 lead.

On third and eight, Hardison completed a dime pass outside the numbers to Garrett for a huge first down. UTEP then was able to power it in for a touchdown from Hankins on a wildcat play. UTEP then went for the two-point conversion and would convert to make the score 28-21.

“We played really, really good football the first 28 minutes of the first half. We executed and we had the one drive that ate up almost the whole second quarter, and it was really, really big for us. We finished drives but had to settle for a field goal on one of those drives.” Head Coach Dana Dimel said in the post-game press conference.

At the 4:00 mark, the Miners defense began to sink their teeth and force Old Dominion into long yard situations after stuffing a run by Mack and stripping away a pass for an incompletion. Innyang would suddenly pick off Mack for a huge turnover to give the ball back to the offense.

At the 3:00 mark, UTEP’s defense stepped up to stop the Monarchs on fourth down.

“I just felt like the whole time we were the better team and were going to find a way to win the game,” Coach Dimel said in a post-game press conference.

The Miner’s defense once again answered the bell with 30 seconds to go, the Miners forced an incomplete pass on fourth down to seal the game and claim a 28-21 victory.