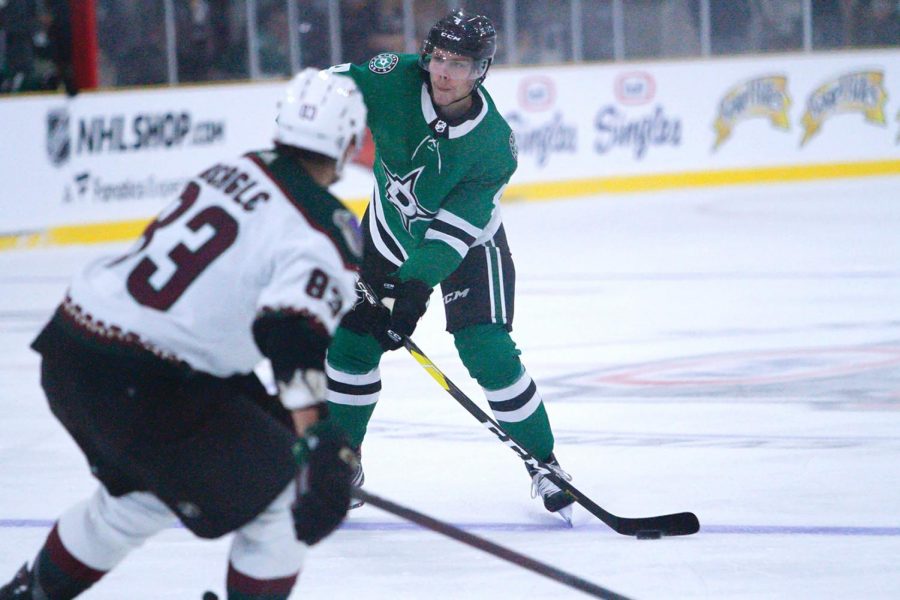 Jacob Peterson, a Center for the Dallas Stars makes a pass against the Arizona Coyotes on October 3, 2021

The Arizona Coyotes (3-0-1) traveled to El Paso to take on the Dallas Stars (1-1-2) on Oct. 3 in the Kraft Hockeyville USA preseason matchup. This game took place at the El Paso County Events Center where the Dallas Stars managed to come out with their first win of the season after a score of 6-3.

The game managed to sell out and those in attendance received a rally towel on their seats as a souvenir. El Paso was awarded the opportunity to host this preseason game after winning America’s most spirited hockey community in America.

Other prizes included $150,000 in rink upgrades from Kraft Heinz, as well as $10,000 worth of new equipment from the NHLPA Goals and Dreams fund.

About six minutes into the first period, Arizona managed to get on the scoreboard after a shot from Defenseman Shayne Gostisbehere, with an assist from teammates Clayton Keller and Alex Galchenyuk. This score came after a power play thanks to Dallas right wing Denis Gurianov getting two minutes in the penalty box after being called for cross-checking. This gave the Coyotes an early lead of 1-0.

Dallas was next to put a point on the board about 11 minutes into the first period. This point came from defenseman Thomas Harley with an assist from teammate and center Mavrik Bourque to make the score 1-1.

About 18 minutes into the first period, Dallas managed to get another point on the board after a shot from left wing Jamie Benn, with an assist from center Tyler Seguin. This goal put the Stars ahead of the Coyotes 1-2.

The first period ended with the Stars up 1-2 over the Coyotes.

In the early portion of the second period, Arizona was able to get a goal thanks to forward Liam O’Brien with an assist from defensemen Ilya Lyubushkin to tie the game 2-2.

After nearly 12 minutes into the second period, Arizona was able to score a goal off a power play from center Christian Fischer, with an assist from Jan Jenik and Victor Soderstrom. This gave the Coyotes the lead with a score of 3-2.

Dallas decided to strike back 14 minutes into the second period after a shot from center Ty Dellandrea with an assist from defenseman Alexander Petrovic.

The score at the end of the second period was 3-3.

Four minutes into the third period Dallas center Joe Pavelski managed to score a goal with an assist from Miro Heiskanen and Thomas Harley. This put the Stars ahead of the Coyotes 3-4.

After 15 minutes into the third period, Dallas took advantage of the power play opportunity and center Tyler Seguin managed to get a goal with the help of Miro Heiskanen and Jamie Benn. This extended their lead over the Coyotes to 3-5.

Nearly at the end of the third period, Dallas center Radek Faksa managed to score one final goal for his team with an assist from Jamie Benn and Miro Heiskanen.

The Dallas Stars managed to shut out the Arizona Coyotes in the third period which is what helped them win the game with a final score of 3-6, handing the Coyotes their first loss this preseason.